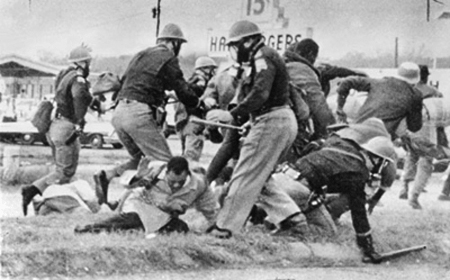 Excitement filled the sanctuary as five generations sat in the audience waiting to hear a legend speak. Oakland’s Beebe Memorial Cathedral was packed from the main floor to the church balcony filled with residents of all races, sexual orientations and faiths. They were all here to hear the legend speak.

Applause broke out and necks craned to see over church hats and fans wagging throughout the burgundy pews. The legend entered the sanctuary and climbed the stairs to the pulpit. The congregation jumped to their feet and clapped for over five minutes. The moderator stated, “No introductions are needed. Ladies and gentlemen, with great honor tonight we are in the presence of greatness. Tonight we will hear from Congressman John Lewis!” Her announcement was met with more thunderous applause.

The city of Oakland was all abuzz about the Barbara Lee and Elihu Harris Lecture Series, which was featuring Congressman John Lewis of Georgia’s 5th District in conjunction with the Martin Luther King Jr. Freedom Center. The lecture series discussion title was: “Where Do We Go From Here? Chaos or Community; Find a Way to Get in the Way!”

Congressman John Lewis was enthusiastically introduced by former Oakland Mayor Elihu Harris and Congresswoman Barbara Lee of California’s 9th District. Harris spoke to the crowd about why social justice was still so important in the 21st century and how despite some historical gains there is still work to be done. He shared a story about trying to get state legislative support in California to make Martin Luther King’s birthday a holiday in the early 1980s.

Harris said a state legislator told him, with good intentions of course, “I’d like to support it (the King Holiday). But if we have a holiday for a nigger, the next thing you know, they’ll want one for a Mexican.” The audience gasped, some nodding their heads in understanding. Harris continued, “Some people still feel that way today and smile in your face. This is why the social justice fight is still significant today!”

Following Harris, Congresswoman Barbara Lee was met with applause and “Amens!” As she took the floor, she paid homage to Congressman Lewis for paving the way for her and others. She stated, “We’ve come a long way, but we have a long way to go! We owe you a debt of gratitude … to pick up the baton and fight the good fight.” 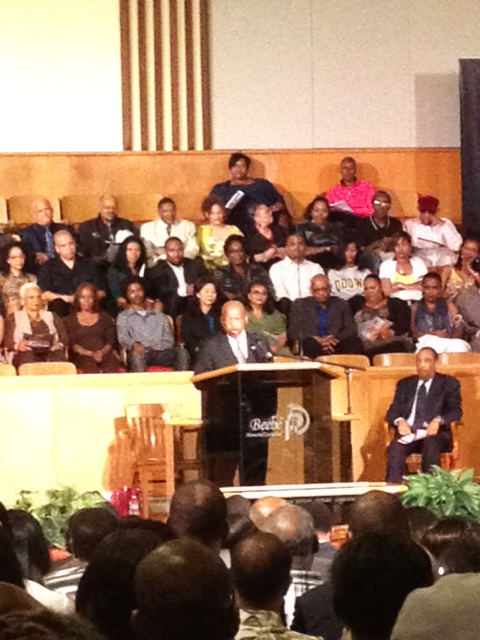 Hundreds of hands went up in the air and began shouting and applauding, “Amen! Thank you! God Bless!” Waves of love and appreciation rippled through the audience as the legend finally stood to speak. Congressman Lewis thanked the audience and then immediately began the Black oral tradition of sacred story telling. He told the story his parents told him during the era of Jim Crow, “Don’t get in the way; don’t get into trouble.” He shared how their warnings came from a place of fear of what could happen to a Black boy in the South who caused trouble to the structure of segregation.

Congressman Lewis commented on the status of Civil Rights today: “Here today we are too quiet! Find a way to get into trouble if we are going to create a real America! For more than 50 years I’ve been getting in trouble and I plan to get in some more trouble!” Speaking of the sacrifices he and others in the movement made, he said, “Through our actions we reformed and liberated a society!”

As he continued to take those gathered on the journey of struggle, loss and triumph, he urged: “We have to vote like we’ve never voted before.” He said, “Over and over again throughout this country, I am asked, ‘Is President Obama the fulfillment of the Martin Luther King Jr. dream?’ I say, ‘No, he is the down payment. Too many are still being left behind – Blacks, Latinos, Asians, Native Americans, gay and straight. Don’t get weary! Don’t get tired! Maybe our forefathers came in different ships, but we all in the same boat now. We must continue until no one is left out or left behind and respect the dignity of every human being.”

As the legend held his fist in the air, the crowd erupted in applause and stood to their feet.

Many San Francisco residents were in attendance. Bayview Hunters Point resident and Southeast Commissioner Bobbrie Brown said: “What a blessing! I lived through segregation and to hear the power of Congressman Lewis’ words was truly amazing.”

Another long term Bayview Hunters Point resident, Carol Tatum, stated: “I loved his story about Bloody Sunday. I just took a Civil Rights tour in March of this year in Alabama, and the guide spoke of the sheriff wearing the ‘Never’ button Congressman Lewis spoke of. What an honor to hear him speak tonight!”

Toni Renee Battle is a consultant, journalist, educator, speaker and a lifelong Bayview Hunters Point resident. She is a small business owner of “Embrace Diversity … Embrace Success” Consulting Services and also founder of The Legacy Project, an educational program which emphasizes the teachings of Black and Native American culture, traditions and histories for youth from seventh through 12th grades. She may be reached at tonirbattle@yahoo.com.