Chris Moreland, who cried “Justice!” at the Oakland townhall, is now in jail on $100,000 bail for battery of an officer, clearly a trumped up charge; arraignment Friday, 2 p.m., Wiley Manual Courthouse; support march 7 p.m., 19th and Telegraph (two new videos featuring Chris below)

Since the shooting death of Trayvon Martin, close to 30 Black or Brown people have been shot and killed by law enforcement – or, in the case of Trayvon, wannabe law enforcement. Many of these shootings have been highly questionable, meaning the person killed was unarmed or there are strong conflicting statements from either the police or witnesses.

Here in Oakland, California, the shooting death of Alan Dwayne Blueford is one such killing. Oakland police have been very shady with the stories they put forth to the public. It seems like a deliberate attempt to muddy the waters, cast seeds of doubt and cover up their own mistakes.

Many believe the officer shot himself after he killed Blueford and saw the young man was unarmed. The police then doubled back and said a gun was recovered; the community has yet to see any evidence of fingerprints, gun residue etc. Many have concluded it was the officer planting a gun near the scene.

This would not be unusual in a city that in the past 10 years has had to shell out over $58 million for wrongful death shootings and police brutality incidents. This would not be far-fetched in a city that was home to a rogue group of cops known as the Oakland Riders, who were found to routinely plant drugs and guns on suspects. One of the Riders is a still a fugitive at large.

Adding to all this was the fact that Blueford was left on the ground for four hours to die while the officer, who lied and then finally admitted to shooting himself, was treated.

The public still does not know the name of the officer, thanks to California’s Police Officers Bill of Rights, which prevents the public from knowing the names of officers involved in brutality incidents. Community investigators have revealed the officer who murdered Blueford is Miguel Masso, a former military man who lives in Los Banos, which is more than 100 miles outside of Oakland. 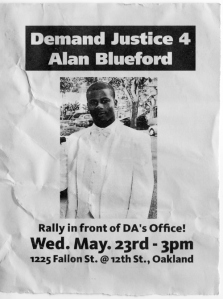 Blueford’s parents were not aware of their son’s death for more than six hours. They went down to the police station, were treated like crap and not told for more than two hours. Their mistreatment led to the unusual move by Chief Howard Jordan to meet and apologize to the family.

In an attempt to do more damage control, OPD held a town hall meeting on Wednesday, May 23, at Acts Full Gospel Church. Folks showed up only to discover the police chief would only answer questions that were pre-written. This annoyed folks to no end. Then he seemed ill prepared or unable to answer basic questions. He also hawked what many saw as blatant lies. This led to more than half the room turning their backs on the chief and throwing up fists.

Chief Jordan’s lies led to more than half the room turning their backs on the chief and throwing up fists.

The chief cut the meeting short and left the building with angry residents in tow. They got at him and let him know that there needs to be accountability and the community would not stand for his lies. The chief was definitely embarrassed.

Later that night we learned Oakland police came after one of the community members shown in the video holding a bullhorn, Chris M. They claimed he assaulted an officer at the church. If that was the case, when and where did that happen and why not arrest him on the spot?

Here’s a video of last night’s townhall meeting and dispersal.

After murdering high school senior Alan Blueford, Oakland police have been trying to do damage control. Initially they claimed Blueford was involved in a shoot-out and shot the officer. We now know the officer shot himself after killing Blueford. The officer’s name was not released to the public due to California law.

The police held a townhall meeting May 23 at Acts Full Gospel church to try and calm down angry residents. As Chief Howard Jordan rattled off lie after lie, folks turned their backs to him. They were not feeling what amounted to a dog and pony show. OPD cut the townhall short as folks surrounded the police and demanded justice for Alan Blueford. We caught up with Oscar Grant’s uncle, Cephus Johnson, aka Uncle Bobby, to get his assessment of what took place. – Video: Davey D

Compare the response of the people of Hunters Point when San Francisco Police Chief Greg Suhr, who had been captain of their precinct before being appointed chief, attempted to hold a townhall meeting on July 20, 2011, four days after police murdered Kenneth Harding, 19, when he ran from them after they pulled him off the T-train light rail car for his lack of a transfer to prove he’d paid his $2 fare. – Video: El Tecolote

Taking it to the streets: Justice for Alan Blueford! Release Chris Moreland!

The townhall meeting did not go as anticipated. The plan had been for Oaklanders to sit in the Acts Full Gospel Church and, like so many devotees, politely listen to the lying monotone of the police chief about the recent killing of another Black youth, then write their questions for triage and more monotonous answers: the rage cleanly severed from voice and heart.

There is such a thing as an appropriate reaction to profound injury. First, the attendees began to turn their backs on the lies: a reaction as old as time (video above by Davey D). Animals in zoos do this when they dislike a visitor. Birds and even butterflies resolutely turn their tails to insults.

The attendees began to turn their backs on the lies: a reaction as old as time. Animals in zoos do this when they dislike a visitor. Birds and even butterflies resolutely turn their tails to insults.

The spell was broken. People had regained themselves. Next, the fists began to rise, and the questions started to flow, unwritten. A bullhorn called “Justice!” and got the response “For Alan Blueford!” 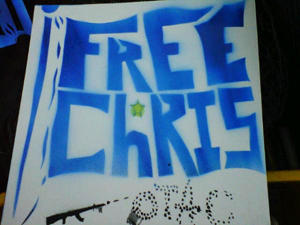 The church could not contain the outrage. The argument moved outside into the bright sunlight, where the police shuffled and looked out of place, anxious, like so many cave dwellers.

Chris Moreland, the man who cried “Justice!” into the bullhorn, is himself now in jail: targeted for arrest by police on the evening of May 23 on trumped up charges including battery of a police officer. How? With sound waves from a bullhorn?

Chris will be arraigned Friday, 2 p.m., at Wiley Manual Courthouse. An emergency march has been planned to support him Friday at 7 p.m. at 19th and Telegraph.

Whatever the police might do to distract the population from the real issues, the Occupy protests in Oakland and elsewhere in the U.S. are about more than the occasional incidence of police brutality. The protests call for dismantling a system of social inequity that requires such a show of arbitrary violence that city police departments in the U.S. behave like a foreign occupation force toward Black youths.

A beautiful tribute to Alan Blueford and his family – Video: Myron Potier

During the May 23 rally at 1225 Fallon in Oakland to call out the Alameda County DA over the OPD murder of Alan Blueford, a young man named Chris Moreland picked up the mic and galvanized the crowd. – Video: Earl Black

Later on May 23 at a townhall called by Mayor Jean Quan and Police Chief Howard Jordan at Acts Full Gospel Church, after over half the crowd turned their backs on the chief and he adjourned the meeting and left, Chris Moreland picked up a bullhorn, led the crowd in chants and challenged the police. – Video: Earl Black 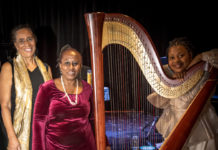