by the International Coalition to Free the Angola 3 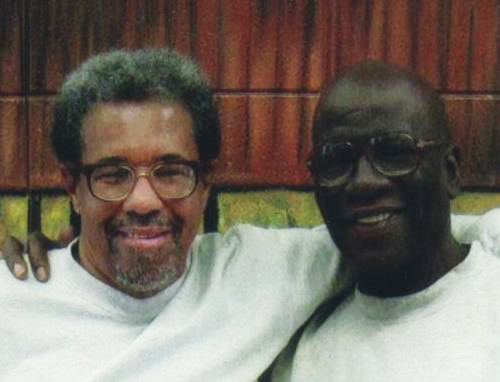 On Tuesday, May 29, Albert Woodfox began a three-day hearing that may result in his conviction being overturned for a third time. Proceedings began at 9 a.m. in Courtroom 1 at the U.S. District Court in Baton Rouge and continue through Thursday, May 31. Albert will be present for the proceedings, and the hearing is open to the public.

Unlike the first and second time that Albert’s conviction was overturned based on judges who cited racial discrimination, prosecutorial misconduct, inadequate defense and suppression of exculpatory evidence during his first trials for the 1972 murder of Brent Miller, this proceeding will seek to overturn based on apparent discrimination in the selection of a grand jury foreperson during his 1998 retrial.

The well known facts of the Angola 3 case will not be debated; all that will be examined is whether or not people of color were discriminated against during the grand jury selection process. This means instead of murder mystery theatre, witnesses will mostly discuss compositions of the pool of grand jury forepersons in the parish where Albert was indicted.

Expert witnesses will discuss statistical analysis and methodology, the demographics of the community and the sociological mechanics of how discrimination can play out in the criminal justice system. If successful, this claim could serve to overturn Albert’s conviction for a third time.

Judge James A. Brady, the same judge who overturned Albert’s conviction the second time in 2008, will preside. That ruling was ultimately reinstated on appeal by the U.S. 5th Circuit Court of Appeals who cited AEDPA-gutted habeas protections that limit federal power that allowed them to defer judgment to Louisiana.

Although there are no time limits officially imposed by law, Brady is expected to rule before the end of 2012. 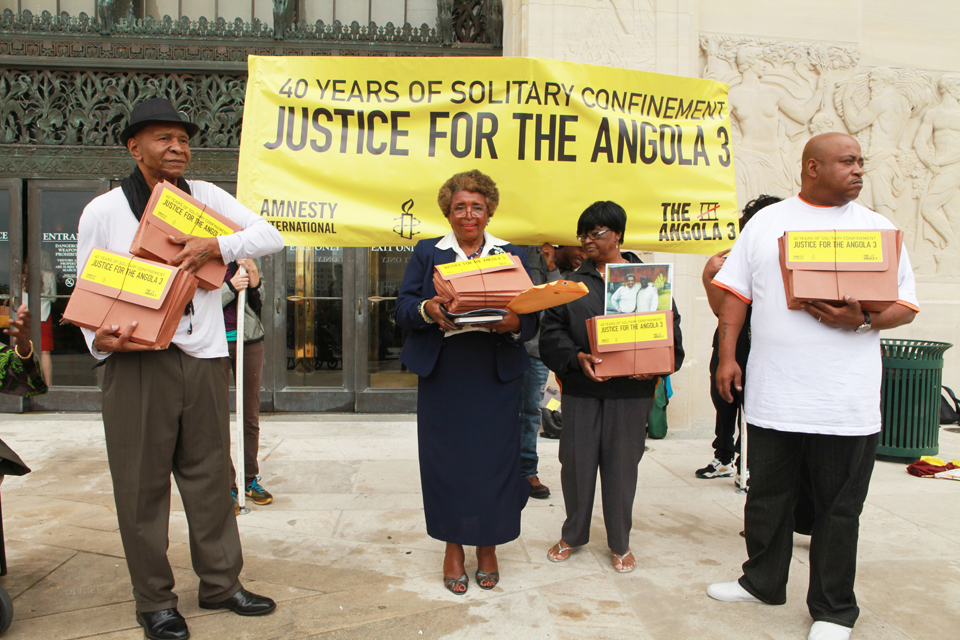 On April 17, Amnesty International was joined by a delegation of supporters, holding a press conference at the Louisiana State Capitol building in Baton Rouge, La., and hand delivering to Gov. Bobby Jindal’s office the petition initiated by Amnesty International demanding the immediate release of Herman Wallace and Albert Woodfox from solitary confinement.

Gov. Jindal refused to meet with the delegation despite several attempts made by Amnesty International to contact him in the weeks leading up to the petition delivery.

In a statement released that day, Amnesty International USA Southern Office Regional Director Everette Harvey Thompson argued that “the 40-year isolated incarceration of these two men is scandalous. There is no legitimate penal purpose for keeping these men in solitary. Louisiana authorities must end this inhumanity.”

The day before, Thompson told Between the Lines: “We’ve contacted Gov. Jindal’s office many times over the past couple of weeks, requesting a meeting to discuss the case of the Angola 3, to inquire about the use of solitary confinement in this case, and there’s been no response. Gov. Jindal has the opportunity to stand on the right side of justice and order removal of Albert and Herman from isolation. We really hope he will take heed and make some moves.”

Herman and Albert each prepared statements for April 17. Herman reflected: “Exactly 40 years ago today, April 17, we will have been incarcerated for 40 years in solitary confinement in the USA. This is nothing new to Albert and I, nor to hundreds of thousands in U.S. prisons.” Commenting on the effects of solitary, Albert said: “To be honest I am not sure what damage has been done to me, but I do know that the feeling of pain allows me to know that I am alive. If I dwelled on the pain I have endured and stopped to think about how 40 years locked in a cage 23 hours a day has affected me, it would give insanity the victory it has sought for 40 years.”

Amnesty International USA Southern Office Regional Director Everette Harvey Thompson argued that “the 40-year isolated incarceration of these two men is scandalous. There is no legitimate penal purpose for keeping these men in solitary. Louisiana authorities must end this inhumanity.”

Following the event, King writes that “standing on the State Capitol steps on Tuesday, 17 April, I felt the power of the people, of 65,000 people and more – all those who have supported the Angola 3 over the years were also with us. We could not be ignored – the media were there and wanted to report on this; organizations stood by our side in support. Amnesty’s presence was felt.

“For me the day was bitter sweet, bitter with a deep sadness that we were marking this day but sweet seeing the years of efforts and struggle culminating in this day. The tide is changing and the time for change is now. We have the wind at our back and we need to keep on moving.”

We want to thank everyone who has supported this campaign! Among the powerful lineup of Angola 3 supporters at the petition delivery and press conference were Alfreda Bester-Tillman, Esq., from the Baton Rouge Chapter of the NAACP, Pastor Kathleen Bacon from the Slidell Chapter of the National Action Network, U.S. Representative Cedric Richmond and State Representative Patricia Haynes-Smith, chair of the Louisiana Legislative Black Caucus.

View more photos from the State Capitol and read the full statements by Robert King, Herman Wallace and Albert Woodfox at http://neworleans.indymedia.org/news/2012/05/16795.php. Join our new Facebook page for all the latest news.