David Keys departed this plane of existence on May 21, just two weeks shy of his 49th birthday.

David served in the Air Force, following a proud tradition of family service in the employ of the United States government. He was an avid sportsman, enjoying basketball the most. David was able to start his business, Keys Construction, which he treasured until his last days.

David was diagnosed with terminal cancer and given less than a year to live. He decided to forgo any pain medications that would ease his suffering from the massive tumors that ravaged his face, invaded his spine and destroyed his liver.

We will remember him for his “do it my way” attitude. And he did it, his way. Thank you, little brother, for your friendship, love and your need to protect your big brother. I miss you every minute of every day.

We are only given as much as we can bear in this lifetime. Yes, David knew me better than anyone and gave me council, love and friendship, yet to answer the question above, “YOU GIVE ME HOPE.” I have been so mired in grief that I could not see the love and support sent to me by family and friends. I would like to thank you for your support and your love, and I have the same for you.

James Keys, the 2010 candidate for District 6 Supervisor in San Francisco proudly supported by the Bay View, can be reached at james.shaye.keys@gmail.com. 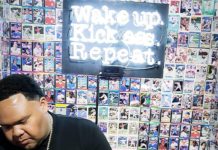