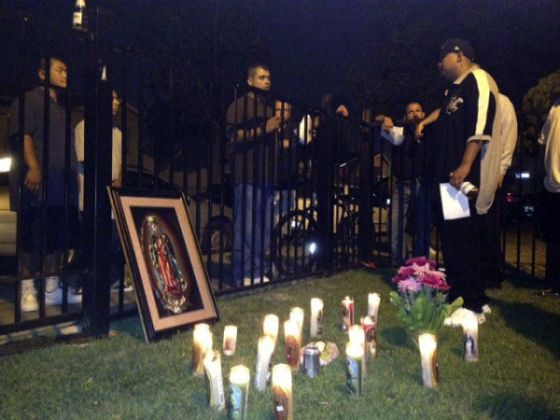 When I last spoke about the riots in response to the Anaheim Police killing Manuel Diaz, I told you a love story. It was a beautiful scene of a community that was motivated by love for their families, friends and neighbors as they stood against police violence in their neighborhood. Children and parents were unified, taking the streets as if the shackles of police repression no longer bound them. This Anaheim neighborhood was living, if only for a moment, as if the police no longer had the right to kill and victimize them. It was a story about love’s boundless energy. That was then.

The following is a video of Manuel Diaz, 24, lying in a grassy lawn while dying from a police officer’s bullet to the head. His family and community looked on in agony; their pain is palpable.

As I discussed in an earlier article, “The Anaheim Anti-Police Riot, A Love Story,” this community is not a passive observer in this struggle against police violence and oppression. Sunday evening, a number of people rushed into the Anaheim police station lobby and conducted a rousing rally just outside the station’s doors. They yelled slogans like “No Justice, No Peace. No Racist Police!” while standing under the police station’s hollow mantra: “Make Kindness Contagious.”

After seeing the group’s concern and anger, the police responded by killing someone later that very evening. Yes, the Anaheim police killed another man less than a day after murdering Manuel Diaz. As Manuel’s blood continued to stain that yard on North Anna Drive, Anaheim police killed a man in a car on West Guinida Lane. 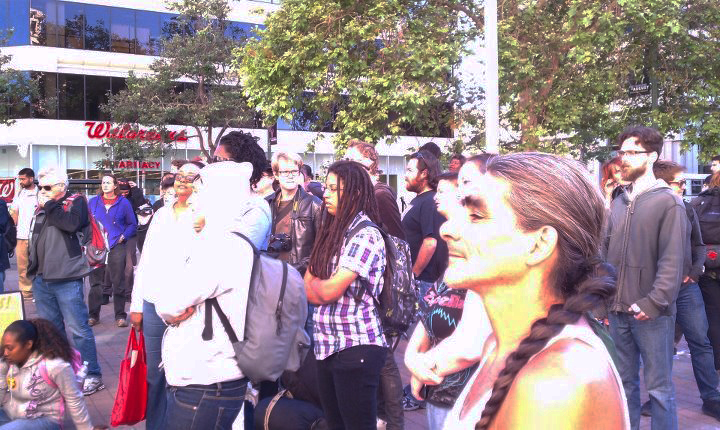 “Anaheim police shot and killed a suspected car thief late last night in the 400 block of West Guinida Lane. The family is on the scene sobbing. Witnesses have told the source the man was handcuffed, then shot by police. No one is being allowed to take photos, according to the source. When a group tried to take photos from an upstairs apartment, police shined a bright light onto the residents to block the view,” reports Amber Stephens in the OC Weekly.

I began this story telling you about insurrectionist love. Sometimes, love for yourself, your family and your community just isn’t enough. There are moments when we have to focus our energy on those forces that seek to ensure our failure. For those who this society marginalizes, failure is death. The stakes are that real, particularly for the historically marginalized.

Moreover, the groups who profit from imprisoning and killing people through a militarized police state are not going to roll over and just let us win. It’s time to tell you of another feeling. After the latest round of murderous policing, it’s time to emphasize hostility. No more water, the fire next time.

“Their actions are meant to beat us into submission. Vengeance is our reaction to that violence … Vengeance, as a motivation for liberatory action, allows us to overcome the fear their violence has instilled in us. Vengeance is the refusal of submission,” according to Queer Ultraviolence.

While the above quote uses the term vengeance, I want to use hostility. Though it is a powerful force and emotion, hostility is not an end in itself. While love and compassion should always be within reach, we also need to create a true crisis for the people who control the structures of power. Our present dance of simply reacting and protesting, only to be recouped by the very system we seek to resist, is not working!

This Anaheim neighborhood has been organizing for years in an effort to stop the police from murdering their family members and to get police-controlled information on how their loved ones were killed by the police.

They tried weekly marches in front of the Anaheim Police Station, which were first organized by Theresa Smith after her son was killed by the police in 2009. The killing continues.

They began speaking out at City Council meetings.

“In September 2010, I attended quite possibly one of the most emotional and explosive City Council meetings in Orange County history. Collender’s family and their supporters filled the chambers of a Yorba Linda City Council meeting, where they demanded answers and accountability for his death. After three months of waiting for answers, they had not been informed of any details of the shooting, including the identity of the officer-shooter. The plight of mourning families during these investigations finally caught the attention of authorities. In December 2010, the DA announced the investigations into officer-involved shootings and in-custody deaths would be detailed in a letter to police chiefs. Unfortunately, the policy does not apply retroactively,” wrote Amber Stephens, OC Weekly.

Nearly two years later, in June 2012, the people were able to get the City Council to support an independent review of “major police incidents.” Yet, there is no timetable for the review, and the only outcome will be that the findings will be shared at a “public workshop” with the City Council. A month following that announcement, the Anaheim police murdered Manuel Diaz. The killing continues.

They tried protesting in their neighborhood the night that Diaz was killed, and the police would go on to kill another man just blocks away from their demonstration.

The fire next time

Perhaps the problem is that we are almost always protesting, making requests and waiting dutifully for the power structure’s response. We live in a nation ruled by racist and pointless drug policies. These laws give rise to biased and violent policing and have created a prison industry worth at least $37 billion. The people who profit from this structure have no interest in relinquishing their power, and they have grown accustomed to the rhythm of protests, studies and public workshops. In fact, it is in the state’s interest for us to focus so much of our energy on its policies and structures.

“The state under the name justice, through its ahistoricized authority, seeks to dissolve conflict through one decontextualized act, one assessment and punishment, makes one claim about one act, and deems the matter resolved. It is incapable of recognizing that the very social order it seeks to restore is what is at issue, incapable of destroying the order that empowers it. Justice process intervenes between the survivor and their power; it undermines survivor autonomy by setting limits on what is acceptable for the survivor to do, to say and what they can and cannot ask for. Justice processes attempt to dictate what a community or survivor needs, and that is always a restoration of the existing order.” – Sparrow 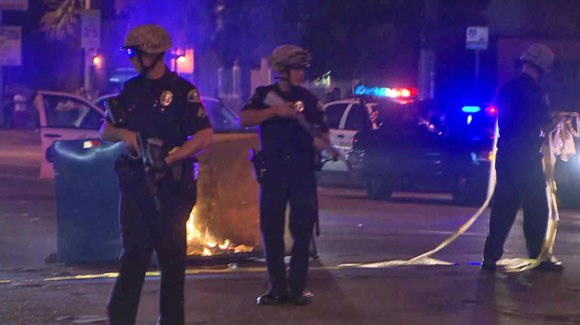 The state keeps us distracted with the fight to press charges, get trials and create new police-neighborhood committees. Meanwhile, the killing continues. Perhaps we should break free of this protest/appeasement dance altogether. I believe in a hostile non-compliance, the refusal to submit.

We don’t have to sit idly by and watch the police kill, deport, and arrest our friends and family with impunity. We already have the ability to live as if the police, despite their authority and violence, are unable to deter our efforts to overcome oppression and incapable of breaking our communities. Our only option is insurrection, and one of our greatest weapons is non-compliance. Liberation comes after the refusal to submit.

Yet, hostility doesn’t always require antagonism. We don’t have to be “against” those who stand in our way. Recall the story of Rosa Parks. As she sat on that Alabama bus in 1955, she was not protesting. Rosa Parks was practicing the politics of composition.

“But what do we mean by composition? Maybe it’s as simple as acting as though we already exist in a different reality- we reclaim a street and recompose it according to a logic different to that of cars and capital… When Rosa Parks refused to obey a public bus driver’s orders to move to the back of the bus to make extra seats for whites, she wasn’t ‘making a protest’. She wasn’t even in ‘opposition’. She was in a different reality. – Free Association, “Moments of Excess” (49-50)

This concept doesn’t call for some sort of willful ignorance. Rosa Parks knew that the White supremacists would put her in jail, or even kill her; she just didn’t allow them to deter her. Though she acted as if she already could sit in the seat, her act was a hostile one.

Rosa Parks knew that the White supremacists would put her in jail, or even kill her; she just didn’t allow them to deter her.

For many of us, it seems impossible to envision, let alone live, without the seemingly omnipresent threat of violent policing. At one point, eliminating de jure segregation was just as fanciful. However, if the police in Germany only fired 85 bullets at people in 2011 – 49 of which were warning shots – then we know there is no immutable law of nature that says that the police must keep killing us.

This shift from passivity to hostility is no easy task. To begin, we must stop looking for the police to be “on our side.” We have to stop emphasizing and even inventing stories of perpetual victimhood in the face of police repression, particularly when those narratives erase other people’s acts of non-compliance. For example, much of the sympathetic coverage about the riot in Anaheim sought to skip over the fact that the community pushed dumpsters into the street and were not complying with police orders. Instead of running from those narratives, we need to embrace them. Hostility creates crisis, and crisis is often the catalyst for change.

A community that doesn’t rely on police violence requires us to develop alternative practices for preventing and dealing with our collective issues. We have to spend more time creating a culture that addresses domestic violence, drug treatment, education, rape, street harassment, White supremacy, heteropatriarchy and other issues. We can no longer place the burden of remedying these issues onto the targets of the abuse; working together is the only way. But this new vision of community will be the product of crisis. Instead of trying to “be the change,” let’s be the crisis we want to see.

So in the words of James Baldwin, “The Fire Next Time.”

Inside a CCA private prison: Two slaves for the price of one, Part Three