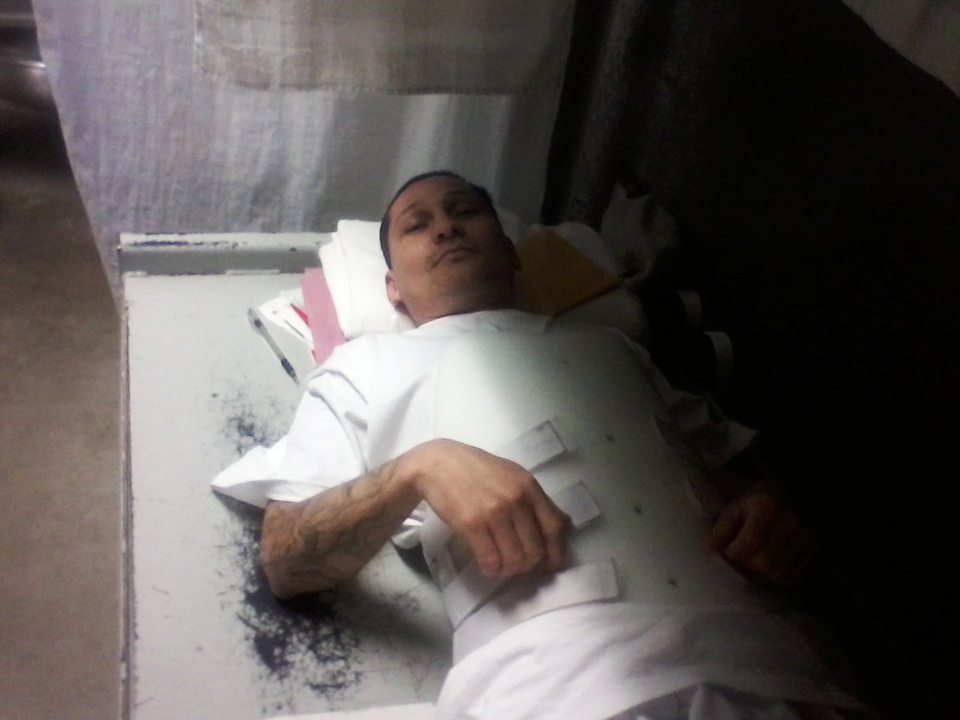 I’m sorry I have not responded back to your last letter, but the reason for that is because I suffered a misfortune: I broke my back on April 6, 2012. And ‘til this day, I have not been getting adequate medical treatment. I am currently under excruciating pain and am wearing this cardio vascular vest since April 20, 2012.

Here are the facts of my misfortune: On April 6, 2012, while on the yard playing spores I went for the ball and three bodies landed on my back while I was pinned semi-bent. I held their weight for a quick second but then I fell and my back broke in half. I was unable to get up at all, and the correctional officers forced me to walk to medical or they told me that I was not going to get any medical treatment or seen, I should say.

So the other two inmates had to carry me to the yard clinic and laid me down on the bench and left. While there I explained to COs and medical staff how my back felt. While there I was forced to get up and into shackles by COs until the paramedics arrived.

Shortly thereafter I arrived in Delano Medical Regional Center, where I was put in a room for hours until x-rays were performed on my back, only to tell me that nothing was wrong with me. Quoting from them, “You only have back ‘spasms.’” I was like how are you going to tell me there’s nothing wrong when I’m telling you I cannot walk nor stand on my feet? I was kicked back on the yard with no pain medications, no walker etc.

I broke my back on April 6, 2012. And ‘til this day, I have not been getting adequate medical treatment.

On April 11, 2012, I was seen by the yard doctor and I explained to him that I couldn’t walk and that my back feels loose and that I’m in severe pain. He then examined my back and noticed it was swollen and had bumps so he ordered x-rays and so on.

April 13, 2012, I went and got x-rays. On April 17, 2012, while in my cell, I get called to the institutional hospital and as soon as I arrived the doctor tells me that I have fractured vertebrae L-1 and a squished disc. I was sent to Bakersfield to be seen by specialists and was told I could end up paralyzed.

Look, I’m sorry I may not make any sense but it’s a little difficult for me to focus. I been on my back for two months. The only change is that I’m now wearing this vest that does not help me at all, let alone this pain I have to go through 24/7 since having put this vest on.

I have not received any pain medications nor a walker, although I have a (CDCR) chrono for such. Look, I don’t want to bore you with my problems but I wanted to ask you if by chance you know of any law firms that deal with suits. I’m unable to write and the appeals that I do submit are all being sent back to me and need legal and professional help.

I have not received any pain medications nor a walker, although I have a (CDCR) chrono for such.

As for the hunger strike at Corcoran (ASU), the warden (Warden Gipson) promised all these things on the petition but did not follow through on anything. And yes, Christian Gomez died due to not eating. Sorry for this long delay. Hope to hear back from you.

This letter was written on June 25, 2012, to Kendra Castaneda, postmarked on June 27 and transcribed on June 29. Kendra notes that Juan’s handwriting is very scratchy, and some words were difficult to make out.

Juan Jaimes is one of the three prisoners then held in the Corcoran Administrative Segregation Unit (ASU) who signed the petition published Dec. 30, 2011, under the headline, “New hunger strike: Petition for improved conditions in Administrative Segregation Unit at Corcoran State Prison.” Their hunger strike was immediately and brutally put down and the three petitioners separated – Juan transferred to Kern Valley State Prison. All participants suffered severe retaliation, even though one hunger striker, Christian Gomez, sacrificed his life. The other two petitioners have also written about retaliation – William E. Brown Jr. in “Corcoran ASU hunger strike petitioner: This ain’t the soft KAGE” and Pyung Hwa Ryoo in “Corcoran officials retaliate against hunger strikers.” 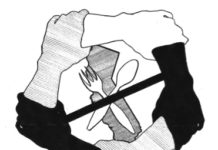 Hunger striker considers where we go from here, wonders, ‘Will the Legislature dupe us too’?

Pelican Bay guards ask why are we hunger striking

Jerry Brown in Germany: ‘From Dachau with love’