The police line was hard, boot to boot, helmet to helmet, unmoving, bringing the threat of death with each gaze. The opposing line was a circle and it was moving, with resistance. And strength and people power. We were mamaz, uncles, daddys, sisters and brothers in solidarity, and we won’t stop fighting, we won’t stop walking, we won’t stop speaking until this ongoing police murder of our babies is over. 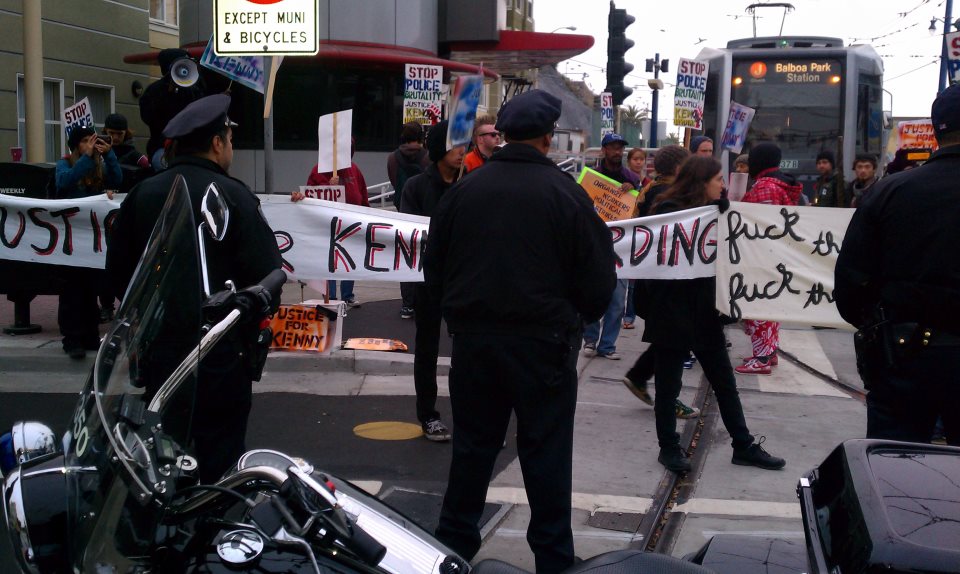 These two lines were in front of the Muni bus tunnel at 14th and Church Street at 6 a.m. on Monday, July 16, in San Francisco, which I have affectionately re-named (Stop and) Frisco due to the stop-and-frisk legislation proposed by Mayor Ed Lee. The line of resistance successfully stopped the Muni buses from coming or going out of the tunnel for almost two hours.

“We pay you, and you kill us,” Tracey Bell-Borden, one of many justice fighters fighting against the ongoing police terror in our neighborhoods, chanted as she walked back and forth in front of the police line. 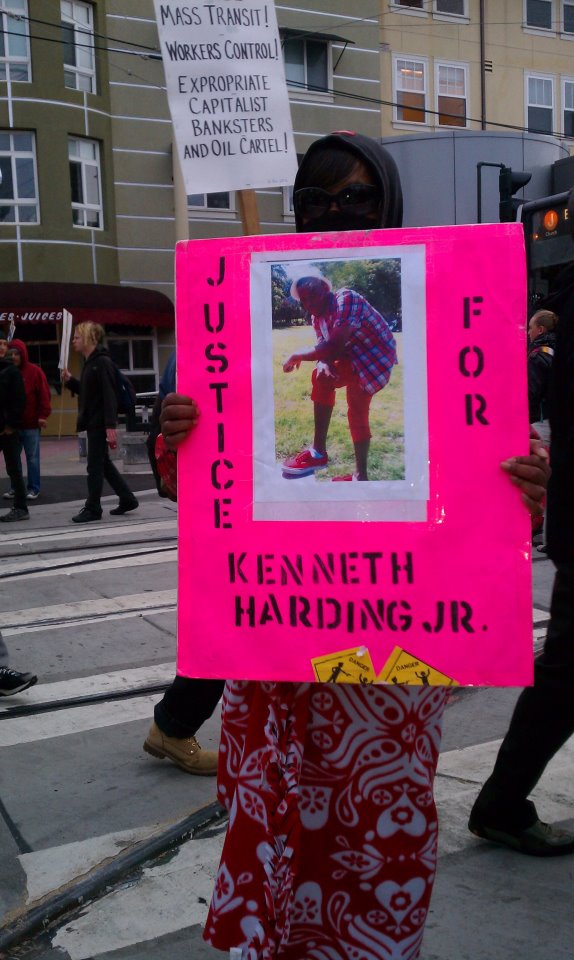 “We are here to commemorate the anniversary of one year of my son Kenneth Harding Jr.’s murder by SFPD,” fierce mama and revolutionary freedom fighter Denika Chatman told the crowd of almost 100 people who gathered to honor Kenneth Harding and all young Black and Brown warriors who constantly face state-sponsored police terror for the sole act of being a young person of color in Amerikkka.

Denika went on to relate the ways in which the Muni transit police practice blatant racial and poverty profiling in poor communities of color like Bayview Hunters Point and the Mission with a massive and unequal police presence on the buses of these neighborhoods.

“Our children are being stalked and murdered in cold blood by this ongoing police harassment, and it cannot continue,” Cephus Johnson aka Uncle Bobby, Oscar Grant’s uncle and a powerful leader against police terror in the community said as he walked the line, not stopping, speaking the truth.

“All of us are under attack, and this is murder,” declared Toussaint Dubois from Labor Black and Brown, walking the line with his real talk.

As we spoke, the police gangsters stood, eyes glazed as they are trained to do, as though we were animals they were taught to kill on sight, clutching and unclutching their helmets, the threat of attack present and constant.

As I, a poor mama, saw them, I shuddered. I tried to hold my head up, to not think of the many times my melanin-challenged self faced their hate, because I am the daughter of a poor wombyn of color, because I am the child of a houseless and hated family, because we didn’t have the money to pay for a roof over our heads for most of our life in Amerikkka. 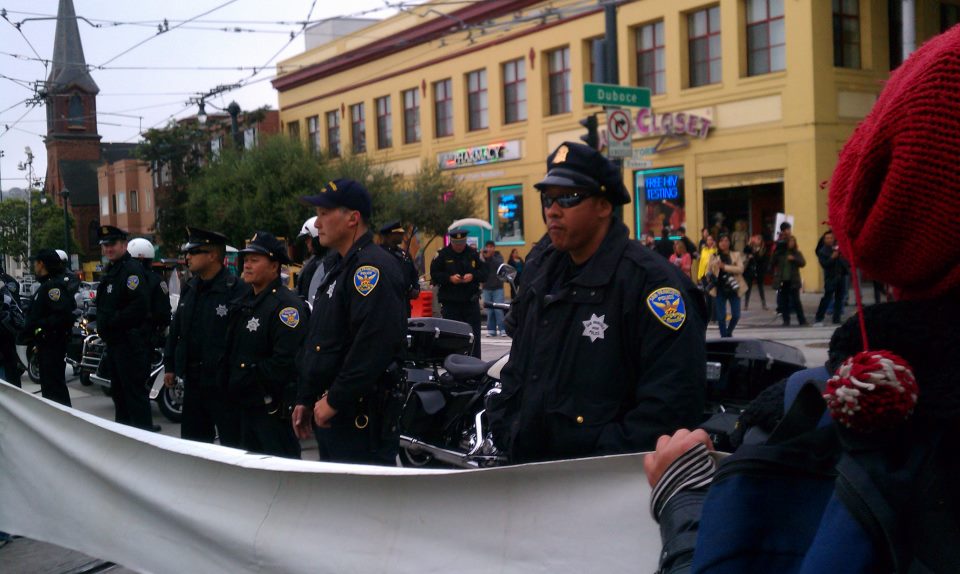 I shuddered as I walked, and yet I walked for Ramarley Graham, Oscar Grant, Amadou Diallo, Annette Garcia, Idriss Stelley, Alan Blueford, Derrick Gaines, Rahiem Brown and every single victim of this ongoing occupation called the police.

At approximately 7:30 a.m., the police occupiers shifted their stance, giving the final threat of attack. We, the people, the fighters for justice, not just-us, moving with humility, peace and liberation, began to march, still chanting, still walking, because we mamaz, daddys, uncles, sisters, cousins and community members won’t stop until THEY stop the killing, the stalking, the harassing and the profiling of our babies, our communities and our spirits.

Tiny – or Lisa Gray-Garcia – is co-founder with her Mama Dee and co-editor with Tony Robles of POOR Magazine, where this story first appeared, and its many projects and author of “Criminal of Poverty: Growing Up Homeless in America,” published by City Lights. She can be reached at deeandtiny@poormagazine.org. Visit www.tinygraygarcia.com and www.racepovertymediajustice.org.