Without question, the big-business class – and their agents in USPS headquarters, the executive branch and Congress – are on a path to dismantle the Postal Service, privatize the profitable parts of it, and neutralize or destroy the postal unions.

Their whole economic system is in crisis. It’s not working. So the 1 percent are trying to pull their own chestnuts out of the fire by a full-bore attack on unions, the workers and the poor – an attack on our union contracts, our jobs, economic security, wages, benefits, conditions and social services. Their assault on the Post Office is part of this strategy.

How can we fight it?

By itself, the legislative strategy – trying to influence Congress – is not working. Congress is bought and sold by the 1 percent – they won’t begin to listen to us until we’re in the streets, mobilized in all our numbers.

The rank and file postal workers and our communities who support us – this is the source of our real strength. We need to reach out and tap into it, just as we did in the Great 1970 Postal Strike. That grassroots upsurge brought about a big change in the relationship of forces between postal workers and the bosses. What used to be work for poverty wages became a living-wage job, with a union contract to protect the workers’ rights. Any postal worker can see this.

A statement by the Million Worker March movement helps to clarify the situation we face today: “All important social movements … in this country were started from the bottom up (rank and file/grassroots) and not from the top down …. A handful of the rich, and powerful corporations have usurped our government. A corporate and banking oligarchy changes hats and occupies public office to wage class war on working people. They have captured the state in their own interests” (Oct. 17, 2011).

The rank and file postal workers and our communities who support us – this is the source of our real strength.

When Reagan took office as president, one of his first acts was to bust the PATCO air traffic controllers union, ushering in three decades of attacks on the union movement and steady decline in the living standards of the working class.

Today, the 1 percent have a much bigger target – the Postal Service. They hate the fact that the 574,000 who work for the nation’s second biggest employer are under union contract and making a living wage.

They hate the fact that in 1970 the postal workers took their destiny into their own hands and shut down the entire mail system for the better part of a week, demonstrating the power of the workers and disrupting business as usual. And the 1970 nationwide postal strike taught another lesson: that the wealth of the 1 percent only exists because the 99 percent creates it for them.

The nation’s largest employer is Walmart. The employer class would dearly love to reduce those 574,000 postal workers to Walmart wages and non-union status. But just because they want it doesn’t mean they’ll get it.

The racist side of the campaign to demolish the P.O. and bust the unions

There’s another side to the move to dismantle and destroy the public Postal Service, this country’s largest unionized employer. And that is the disproportionate effect it would have on workers and communities of color. 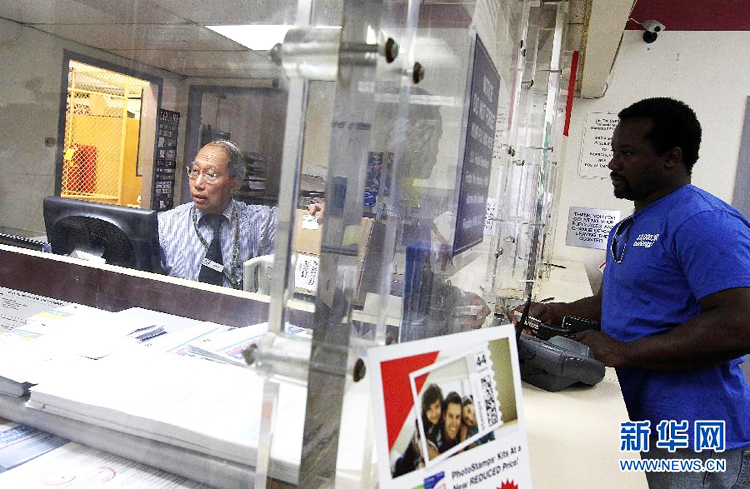 If you’ve ever seen a group picture of postal workers from before the Second World War, you noticed that it was a practically all-white group and mostly men. But after World War II things began to change, with the development of the civil rights and Black liberation movements. The P.O. began hiring Asian Americans, Latinos, Mexican Americans, African Americans and a lot more women. So that by the time of the 1970 strike, it was a much more integrated and diverse work force.

Today the Postal Service is the largest single source of Black employment and, for many workers, one of the few places where living-wage jobs are still available in our low-pay, “post-industrial” economy.

The campaign to privatize and de-unionize the USPS is a threat to the livelihood of every affected worker and neighborhood. But it stands to hit hardest in those communities of color that are already suffering unemployment at Great Depression levels.

Building community-labor coalitions in every city and town

We can and must build a powerful, nationwide movement to defeat privatization, maintain living-wage postal jobs, expand postal services and save the Post Office as a public entity operating in the public interest.

This grassroots effort has already begun. Community-based coalitions are springing up, with some creative tactics. Here’s a sampling:

• In New York City, Community-Labor United for Postal Jobs and Services organized large neighborhood protests to stop the closing of postal facilities in Harlem, South Bronx, Staten Island, Chelsea and Coop City – as well as keep six-day delivery and preserve living-wage postal jobs. The youth group of Al Sharpton’s National Action Network participated in a “Don’t Close It” march and occupation of a Harlem station. The coalition also organized a march of 500 to the Main Post Office on the anniversary of the 1970 postal strike. See http://clupjs.com/.

• In Portland, Oregon, a chanting crowd of 100-plus including postal union heads massed outside University Station, on the USPS chopping block for closing. Inside the station, one retired carrier and nine from Occupy Portland unfurled 10-foot banners reading, “Occupy the Post Office” and “No Closures, No Cuts!” and were arrested when they refused to leave. Great media coverage. The community coalition includes Jobs with Justice and Rural Organizing Project, which has mounted a “Return to Sender” campaign to preserve full-service post offices without reduced hours all over rural Oregon.

• In San Francisco, a large crowd with an “Occupy the Post Office” banner took over the lobby of the Civic Center post office – one of five in the city that the postmaster general wants to close. The station is a lifeline for the many people without homes or living in city-supported “single room occupancy” hotels for the very poor – who get their mail in P.O. boxes or at the “general delivery” window. Some 200 people took part in the rally, march or occupation of the P.O. It was organized by the Community-Labor Coalition to Save the People’s Post Office, which includes NALC and APWU activists, Living Wage Coalition, SF Labor Council, Church Women United, Green Party, Gray Panthers, Occupy SF Action Council, Union of Unemployed Workers and the Senior Action Network. Contact SaveThePostOffice@sonic.net.

• Local coalitions have banded together to form Communities and Postal Workers United. CPWU organized a four-day hunger strike in Washington, D.C. The 10 fasting postal workers’ message to Congress: “Stop starving the postal service!” The fast was heavily covered by national and local media – a breakthrough in explaining to the public about the pre-funding mandate and other efforts to sabotage and privatize the service. The week ended with a protest at USPS headquarters at L’Enfant Plaza. Retired mail handler John Dennie attempted to make a citizen’s arrest of Postmaster General Donahoe for the PMG’s criminal actions in seeking to destroy the service. Dennie charged the PMG with violating 18 US Code 1701, Knowingly and Willfully Obstructing Passage of the Mail, and 18 USC 1703, Delay of the Mail. When police grabbed Brother Dennie, demonstrators sat in. Since then, CPWU chapters have sprung up in many cities and towns. See www.cpwunited.com.

The movement is under way and growing, initiated by rank and file letter carriers, clerks and mail handlers and aroused communities who don’t want to lose their post office. We can no longer wait for “someone else” to get things going. That “someone else” may very well be you.

The postmaster general has announced devastating attacks on the Postal Service. He’s threatened to:

• eliminate 220,000 living-wage postal jobs from our communities
• close 250 mail processing centers and 3,700 post offices, mostly in poor and rural areas
• degrade service standards
• delay the mail by one to three days minimum
• cut window hours to as little as two hours a day
• eliminate Saturday delivery and curtail door-to-door delivery of the mail.

This threatens the very survival of the people’s Post Office which for over 200 years has provided universal mail service at uniform rates to every part of the United States, and has the support of the great majority of our people.

The Post Office receives no federal tax money. Its total income is derived from the labor and skill of 574,000 postal workers who serve millions of customers daily and also operate the nation’s largest fleet of trucks. The Post Office is a strategic “multiplier industry,” with up to 8 million workers in related industries depending directly or indirectly on the USPS for their livelihoods.

Today the Postal Service is the largest single source of Black employment and, for many workers, one of the few places where living-wage jobs are still available in our low-pay, “post-industrial” economy.

The postal system continues to thrive despite competition from the internet and despite the severe economic downturn. Postal revenues just about matched expenses over the last six years – until they slapped the USPS with an unprecedented $5.5 billion a year charge to pre-fund retiree health benefits. They also drained away an additional $50-70 billion by over-funding postal pensions, according to government reports.

This is a manufactured crisis, providing Postmaster General Donahoe and the richest 1 percent with their phony arguments that the postal system is broke – and preparing the way for an attempt to sabotage, dismantle and privatize this trillion dollar industry and run it for private profit.

The postal system belongs to the people. To safeguard our heritage, and ensure that the interests of the people are being protected, the Post Office needs to be publicly owned and run in the public interest.

We are Save the People’s Post Office, a community-labor coalition in the San Francisco Bay Area. Our goal is to build a powerful grassroots movement in this area and nationwide – to defeat privatization, maintain living-wage jobs, expand postal services and save the Post Office as a public entity operating in the public interest. Contact us at SaveThePostOffice@sonic.net or (510) 847-8657. Our coalition is part of a national network, Communities and Postal Workers United, www.cpwunited.com.

Dave Welsh, a retired letter carrier and delegate to the San Francisco Labor Council, is an organizer with the Community-Labor Coalition to Save the People’s Post Office. A good information source is www.savethepostoffice.com.

Save our local post offices … and the entire U.S. Postal Service