by Jacquie Taliaferro and Doug Latham

San Francisco – San Francisco 49er victories are sweet and sometimes bittersweet, mostly sweet as in the sweet smell of success. Being a San Francisco native and a Niners fan dating back to when my father took me to the old Kezar Stadium, watching John Brodie throw the winning Alley-Oop pass to R.C. “Alley-Oop” Owens, Abe Woodson, Jimmy Johnson and Hugh McElhenney and the rest of the “Gold Rush,” putting the smack-down on their opponents.

It was thrilling and some of my best memories of my dad, who would have been 100 years young on 11-11-11 had he survived, were at Kezar. God bless his soul and let his spirit fly high. Sometimes I take my son, Alex, to Kezar and we throw the football around; however, it is not the same.

Forty-niners pre-season opener – will they make it all the way?

The 49ers are planning to move – this time out of our “fair city.” Candlestick Park, where they play now. was built for the Giants, who moved some time ago to Pacbell, now AT&T Park. Candlestick has undergone many makeovers, bringing it to a “B” Class stadium at best. Of the many suggestions about what to do with the “Stick” after the 49ers relocate, at the top of the list must be the idea that brings revenue-cash-money to the Bayview Hunters Point area. As we said in the beginning: “sweet, bittersweet.” 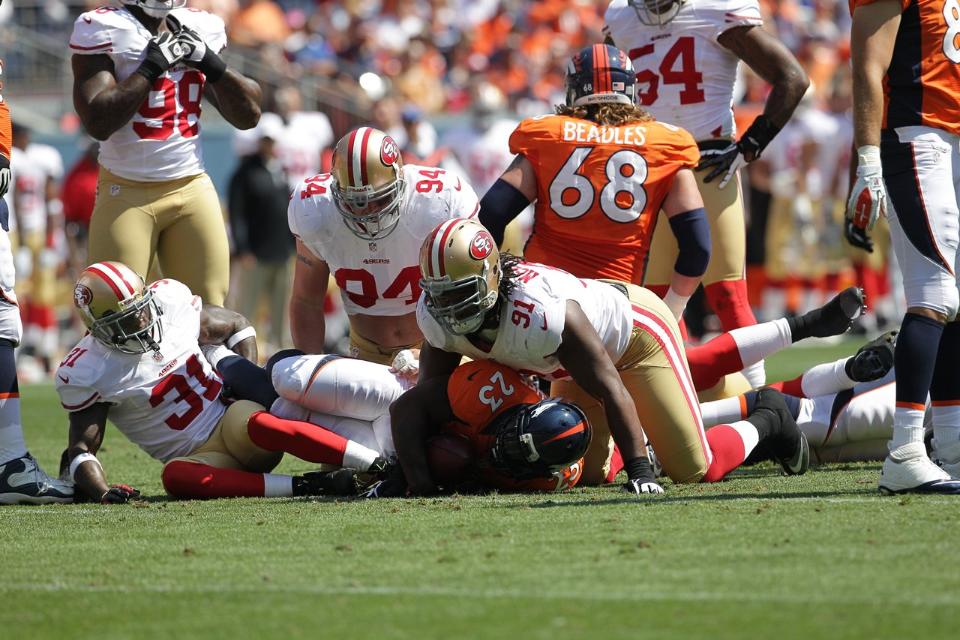 Mike Nolan, then Mike Singletary, procured the ingredients to this cake. Jim Harbaugh has taken those ingredients and baked a champion team. The veterans are relaxed and new additions are confident, skilled and exciting, harking back to those years when one season it was Hall of Famer Ronnie Lott and a year or two later, Hall of Famer Jerry Rice leading the way to 49er glory. Indeed it was a sweet time to be a Niner fan.

There have been more shootings in the Bayview Hunters Point community. Youth violence is at an all-time high. With rampant unemployment, no recreational facilities or planned activities for our youth, the long summer days are an open invitation to the guns and drugs that plague most inner cities. The phrase “Idle hands are the devil’s workshop” has never been more appropriate. We can’t help but ask the question, “Where are the drugs and guns coming from?”

On some levels, there are some positive answers that come from the Niners, who have been there and done that.

Winning brings in the bucks: Ticket prices tripled, as did the Niner gear and TV ad revenue as the Niners made their resurgence into the post-season in 2011 for the first time since 2002. All this means very little to the residents: The Bayview Hunters Point-Double Rock area are the lowest income communities in San Francisco.

The Yorks are a class act, as I have observed, having interviewed both Dr. John York and Jed, over the years, mostly at charity events. An old adage comes to mind: “Give a man a fish; you feed him for a day. Teach a man to fish; and you feed him for a lifetime.”

It’s obvious that the Bayview needs an “economic stimulus package.” Of course the Hunters Point Naval Shipyard provides economic stimulus for some people and will continue to grow like the Presidio. On the Third Street Corridor, Sam Jordan’s, Bayview Plaza, Ruth Williams Opera House, Monte Carlo and the Jazz Room, among others – all they need is more patronage.

The San Francisco Bay View newspaper and LaHitz Sports are starting a “Great Kids in the Bay View” writing contest. Each contestant will write about his or her favorite 49er (offensive and defensive players) to win tickets to a game and get their photo in the paper with the players.

The recent mayor’s conference at Calvary Hill Community Church stressed the need to reach out to young people before it’s too late.

Encourage the young people in your community to enter the contest. Write about your favorite 49er in 50 words or less. Email your entry to LaHitznews@yahoo.com with the subject line: My Favorite 49er. Good luck!