Lagos – Nigerians who were recently repatriated from crisis-torn Libya described their ordeal after they were caught between two feuding camps. 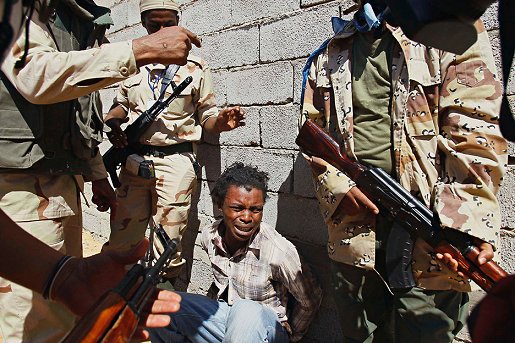 Their appearance tells the story of the ordeals they went through in their host country. The 327 Nigerians who were recently evacuated from Libya wear the scar like a toga. Disheveled, disillusioned and angry, the returnees – men, women and children – arrived at the Murtala Mohammed International Airport in mid-July in two batches on board a Tripoli Air Memphis Subme plane.

The stranded Nigerians, according to the National Emergency Management Agency (NEMA), were evacuated to the country from Libya through the effort of the International Office for Migration (IOM), a United Nations body.

Statistics by the agency indicate of those brought back, 113 are females and 214 males. Among them also are 11 under-aged children and one elderly person.

Weekly Trust learnt that some of the returnees had been tortured or imprisoned by the new government in Tripoli before they were evacuated. Some of them who relived their experiences painted a gloomy picture of the post-Qaddafi era. They had been caught in the crossfire there.

Mr. Okwudolor John said, “The situation is very bad in Libya. Nigerians are suffering; some are very sick while others are dying.

“We lost everything during the crisis: money, clothes, everything indeed. Libyan hoodlums capitalized on the crisis to rob and dispossess us of our property.”

Esther Omoreghe, who returned with two of her children while her Ghanaian husband and her son died in the heat of the crisis, regretted her sojourn to a foreign land and vowed that she would never allow her children or relations to travel outside Nigeria.

A returnee simply identified as Jennifer, who could not hold back tears, said she left Nigeria in search of greener pastures, but came back dejected with a pregnancy.

“We lost everything during the crisis: money, clothes, everything indeed. Libyan hoodlums capitalized on the crisis to rob and dispossess us of our property.”

“The Nigerian government should wake up, because so many of us are dying in Libyan prisons. Libyans do not want to see us at all.

“If you have somebody in Libya and have not heard from the person for a long time, just know either the person is dead or in one of the prisons,” she said.

Jennifer said the person responsible for her pregnancy, a Nigerian, was in one of the unknown prisons.

Miss Idemudia Joy said her travelling to Libya was a “wasted effort,” blaming the different levels of governments in the country for her predicament.

“I think if everything had been well in Nigeria, none of us would want to go through hell on earth. I went to Libya through the desert. I trekked night after night through the desert, but see where I have ended up. But I still thank God I came back complete and was not detained endlessly in their prisons. Here I can start a small business to take care of my baby and myself,” she said.

“If you have somebody in Libya and have not heard from the person for a long time, just know either the person is dead or in one of the prisons.”

Idemudia urged the federal government to expedite action to evacuate Nigerians from Libyan prisons and hospitals and those hiding in different villages.

One of the returnees, who came home with POP on his leg, said he was shot by a security officer while doing his business in the crisis-torn country. He said there was an increasing hatred for Nigerians and appealed to the federal government to act fast to save young Nigerians in Libya.

“The government should stop saying there are no Nigerians in Libya. There are many of us in prisons, hospitals and some doing odd jobs for companies, just to find a place to hide,” he said.

A NEMA official who spoke on condition of anonymity said it is not only Libya that is repatriating Nigerians. “On March 7, 2011, at the peak of crises in some parts of North Africa, NEMA in collaboration with the International Organization for Migration (IOM) and other partners repatriated about 991 Nigerians, mainly from Egypt and Tunisia, while on the Feb. 27, 2012, about 292 Nigerians returned from Libya to Lagos.

Also, 423 Nigerian returnees were received by NEMA at the border town of Gamboru-Ngala in Borno State in four batches in 2011. 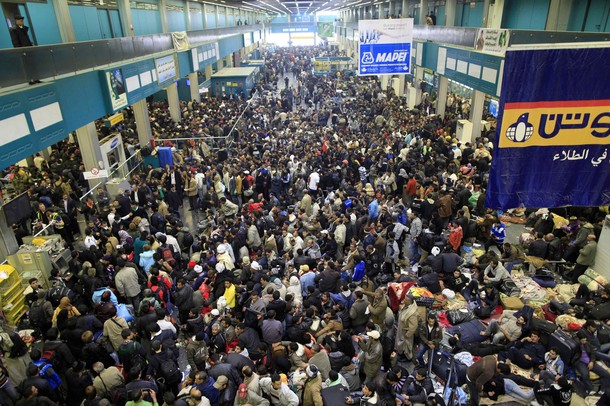 Altogether, over 3,000 Nigerian victims of the Arab Spring crises, he said, have been repatriated to Nigeria by NEMA and other international and national humanitarian organizations. The first batch returned at the peak of the Tunisian and Egyptian crises when many nationals were trapped in those crisis torn countries.

He said many Nigerians could not be evacuated then, because most of them could not be reached at the time of the scheduled evacuation, as most of them were living in the rural and remotest areas in those countries.

Another hindrance in reaching Nigerians at the time, he said, was that many of them could not access mass communications like social media, radio and television that were deployed by the Nigerian embassies and NEMA to inform the distressed Nigerians on the assembly points for their evacuations.

“It’s pertinent to stress that most of those who turned up for evacuation earlier later turned down the opportunity to return to Nigeria, and with the humanitarian principle of non-compulsion to force people to reside against their place of choice, the Nigerian government was compelled to leave the Nigerians who decided to remain until they voluntarily opted to return to Nigeria.

“The current returnees may be part of those who refused to return at the initial time, while more of them may turn up for eventual return when they feel like returning to their fatherland, he said.”

This story was previously published by Otedo.com.

A young man set himself on fire in Boma, Democratic Republic of the Congo, and becomes a martyr of the Congolese Revolution