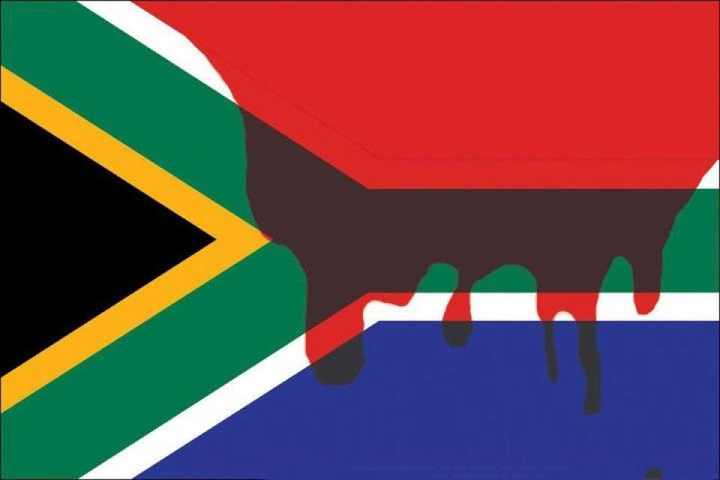 On Aug. 16, South African police fired on miners engaged in a wildcat strike at a platinum mine owned by the Lonmin Corp. in Marikana, north of Johannesburg in the country’s Eastern Cape region. (See videos of the massacre here.) Lonmin is registered in London and traded on the London Stock Exchange, though its operational headquarters are in South Africa.

Thirty-four striking miners have been confirmed dead by authorities. Others report that the number has risen to 45. On Aug. 17, the Telegraph reported that “sobbing women were yesterday searching for their missing husbands.”

This was South African security forces’ most lethal assault on any sector of the country’s civilian population since the end of apartheid, and South African media have compared the shootings to the country’s Sharpeville Massacre in 1960, in which the South African police opened fire on a crowd of Black protestors, killing 69 people. The country’s police commissioner said that her officers were defending themselves from an aggressive and armed mob.

Ending apartheid was, like electing Obama, a bridge that had to be crossed, but it was not enough to create a just or “post racial” society. 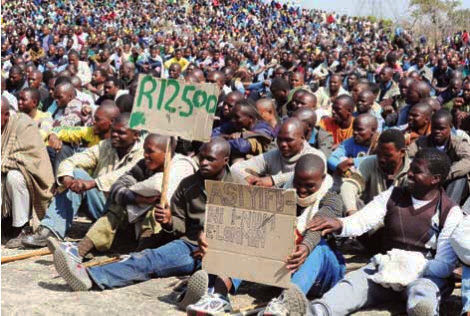 It’s now two days after the brutal, heartless and merciless, cold bloodbath of 45 Marikana mine workers by the South African Police Services. This was a massacre!

South Africa is the most unequal country in the world. The amount of poverty is excessive. In every township there are shacks with no sanitation and electricity. Unemployment is hovering around 40 percent. Economic inequality is matched with political inequality. Everywhere activists are facing serious repression from the police and from local party structures.

Mining has been central to the history of repression in South Africa. Mining made Sandton to be Sandton (a district in Johannesburg known as “Africa’s richest square mile”) and the Bantustans of the Eastern Cape to be the desolate places that they still are. Mining in South Africa also made the elites in England rich by exploiting workers in South Africa. You cannot understand why the rural Eastern Cape is poor without understanding why Sandton and the City of London are rich.

Mining has been in the news in South Africa recently. Julius Malema, a corrupt and authoritarian demagogue who represents a faction of the BEE elite (those few Blacks who have been enriched by the post-apartheid Black Economic Empowerment policies that were supposed to redistribute wealth to the masses), has been demanding nationalization.

Progressive forces inside and outside of the alliance oppose Malema because he represents the most predatory faction of the elite and is looking for a massive bailout for his friends who own unprofitable mines. What we stand for is the socialization, under workers’ control, of the mines. We also stand for reparations for the hundred years of exploitation. 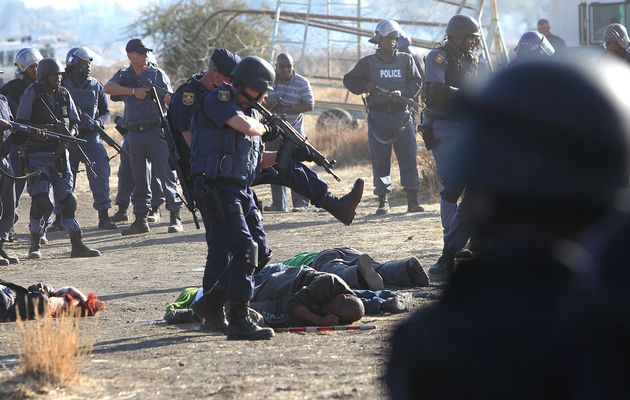 Things are starting to change but not for the better. Khulubuse Zuma, the president’s nephew, and Zondwa Mandela, the former president’s grandchild, and many others with close family ties to politicians have become mining tycoons overnight. China has joined the bandwagon as well, plundering our resources.

Frans Baleni, the general of the National Union of Mineworkers (NUM), earns R105,000 ($12,600) a month. NUM has become a route into high office in government and even to places on the boards of the mining companies. The union is rapidly losing all credibility on the mines. It is clear that it is now co-opted into the system and is part of the structures of control. It is the police that take NUM to address the workers.

Baleni’s betrayal of the workers has made him a very rich man – a rich man who condemns and tries to suppress the struggles of the poor. It is no surprise that workers are rejecting NUM, trying to build an alternative union or acting on their own without any union representing them. The workers are right to chase the NUM leaders away from their strikes.

The Marikana mine is the richest platinum mine in the world and yet its workers live in shacks. Most of the slain workers are rock drillers, the most difficult and dangerous work in the mine. They do the most dangerous work in the mine and yet they earn only R4,000 ($480) a month. Through their blood and sweat in the mines, they not only produce wealth that is alienated from them, they also produce the fat cats, who wine and dine on naked bodies and call that sushi.

Through their blood and sweat in the mines, they not only produce wealth that is alienated from them, they also produce the fat cats, who wine and dine on naked bodies and call that sushi.

The workers who occupied the hill came from many places, including Swaziland and Mozambique. But most of them came from the rural Eastern Cape, from the former Bantustans where people live their lives as a living death under the chiefs, without work, without land and without hope. 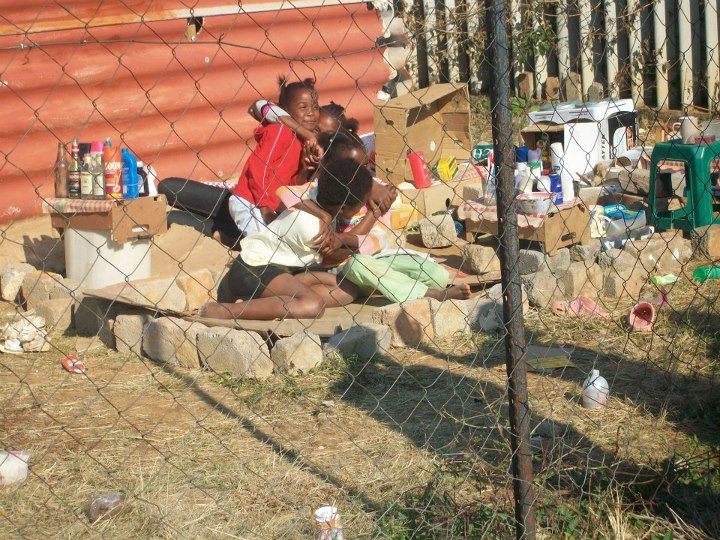 Every Rand that they win back from the capitalists is another rand coming to the poorest part of the country – the part of the country that has been most devastated by the mines over the last century. We celebrate every Rand that the workers have taken back from the capitalists and fully support their demand of a salary of R12,500 ($1,500) a month.

Will Baleni or Nzimande or Zuma accept R4,000 a month? If not, why should anyone else?

The strikers see the NUM leaders as traitors. They delinked from the NUM because they saw that they needed to delink from the alliance of capitalists that run the ANC. The decision to delink was very courageous! We will have to delink in every sector if we are going to build a real movement for change.

Workers under the tripartite alliance (African National Congress (ANC), Congress of South African Trade Unions (COSATU) and South Africa Communist Party (SACP)) are being sundered from socialism. They are only being encouraged to vote for the ruling party.

It is easy to decide not to decide. It is much harder to make a decision pregnant with risk and promise. For miners to delink from the likes of Baleni and tripartite alliance was a courageous decision. They understand that courage is an important element of all struggles.

If the strikers were protesting under the banner of the tripartite alliance they wouldn’t have been slaughtered. COSATU strikes have often been violent but their members are not shot like animals. In fact, the campaigns to support Zuma in his rape and corruption trials were full of threats of violence and yet Zuma supporters were not gunned down.

Before the miners occupied the hill, they made a vow that no bullet will deter them. They were willing to fight and die to get a fair share of the wealth of this mine for themselves and their families. What this demonstrates is that these were people who were aware of the risks that their decisions entailed, who thought about such risks carefully, guided by their conscience, and concluded that they were willing to face the consequences that could arise.

Before the miners occupied the hill, they made a vow that no bullet will deter them.

Helen Keller’s words ring true: “There is no such thing as a complete security, and if there was, what fun would life be? Character cannot be developed in ease and quiet. Only through experience of trial and suffering can the soul be strengthened, ambition inspired and success achieved.” She adds, “To keep our faces toward change and behave like free spirits in the presence of fate and adversity is strength undefeatable.”

We do not see this courage amongst the left. In fact, most of the left has abandoned real struggle in real communities for meetings and conferences and emails. The left has become something that NGOs run. It is about bussing poor Black people into meetings that they have no control over and that are very far removed from the realities of our real struggles.

It is about educating the poor and not about fighting alongside the poor. When real struggles happen in places like the shack settlements of Zakheleni, eTwatwa or Kennedy Road, most of the left is not there. But when there is a big conference, they are all there.

The ANC government has killed workers for demanding a salary increment from a notoriously exploitative and very, very rich company. The workers earn only R4,000 ($480) per month, doing the most dangerous work. The ANC president and cabinet ministers earn not less that R2 million ($240,000) per year. And on top of that there is corruption everywhere. Our politicians are part of the global elite. The lowest ANC employee earns not less than R20,000 ($2,400) excluding benefits.

The Marikana mine workers lived in shacks with their families. The president of the ANC has recently built a mansion in his homestead, a mansion that cost taxpayers not less than R200 million ($24 million).

It is the ANC government that shoots and kills protesters when they are fighting for the assertion of their humanity. They recently killed Andries Tatane. They have killed at least 25 others on protests since 2000. If you are poor and Black, your lives count for nothing to the ANC.

What lesson can be learnt from the Marikana mine workers massacre? The ruthlessness of this government does not diminish but on the contrary increases with the number of workers and unemployed who starve. They are criminalizing our struggles and militarizing their police. It is clear that anyone who organizes outside of the ANC, in communities or in the workplace, will face serious and violent repression from the party and the police.

They are criminalizing our struggles and militarizing their police.

The NUM and the SACP have made it very clear which side that they are on. By supporting the massacre and calling for further repression against the workers, they have made it quite clear that they are on the side of the ruthless alliance between capital and the politicians.

They have declared, very clearly, that they support the war on the poor. Their reactions to the massacre are a total disgrace. No credible left formation in South Africa or anywhere in the world can work with the NUM or SACP again. The decision of the miners at Marikana to delink from the corrupt and ruthless politics of the alliance has been vindicated.

Things will not get better but will get worse. When the elite’s power is threatened, they will respond with more and more violence. War has been declared on the poor and on anyone organizing outside of the control of the ANC.

We are our own liberators. We must organize and continue to build outside the ANC. We must face the realities of the situation that we confront clearly and courageously. Many more of us will be jailed and killed in the years to come.

What they have done can never be forgotten nor forgiven.

Ayanda Kota, chairperson of the Unemployed People’s Movement in Grahamstown, South Africa, can be reached at ayandakota@webmail.co.za or 078 825 6462.