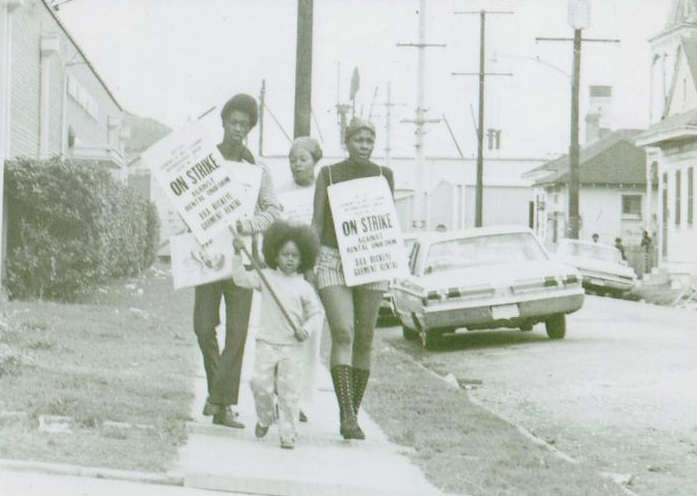 This photo comes with a sad story. I got the photo from Althea Francois before she died. In 1970, a garment and uniform cleaning company went on strike in New Orleans. They asked for and received support from the BPP chapter in New Orleans. The photo shows members of the New Orleans chapter walking the line and carrying picket signs for support.

The child with the sign is Olga, Althea’s daughter. This picture was taken by the FBI and sent to Althea’s parents. They told her parents that she was putting their grandchild in dangerous situations.

This set off a chain of events that Althea wondered about for many years. Her parents became very protective of Olga and at times kept Olga from her.

It became so bad that Althea had to kidnap her daughter from her parents. The whole situation was very stressful for Althea who for many years wouldn’t talk to her parents. It was very painful for her.

Althea told me this story one day while she was visiting me and Gail in Sacramento with Robert King when he first got out of prison in 2001. She never knew why her parents acted like that.

Her mother died a few years before Althea did. When Al was cleaning up her mother’s house, she found an envelope with this picture in it and the letter from the FBI. A pure example of COINTELPRO.

Black Panther veteran Billy X Jennings administers the website www.itsabouttimebpp.com, serving as archivist and historian for the Black Panther Party. He can be reached at itsabouttime3@juno.com.

Transgenders and Blacks at Lane Murray Unit: Victims of abuse and...