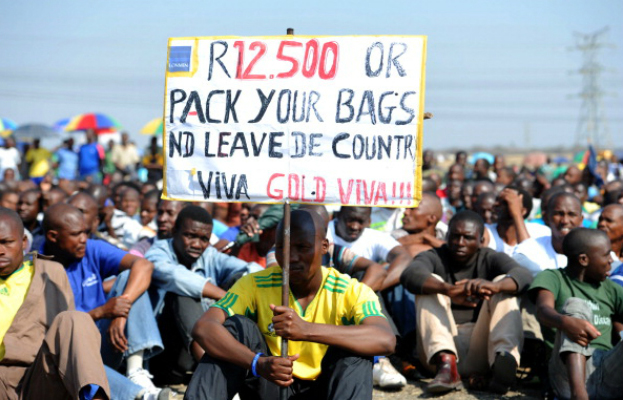 The massacre in Marikana, South Africa, of striking mine workers has caused dismay and disbelief the world over. Thirty-four miners were slaughtered and 78 others wounded by a hail of police gunfire.

How could this happen under a predominantly Black government, led by the African National Congress (ANC)?

The spectacle tells the tale: Black police, clad in blue overall uniforms, were called by the Lonmin Mine Co. officials, to stand against Black miners holding a wildcat strike demanding better wages and improved working conditions.

How could this happen under a predominantly Black government, led by the African National Congress?

When they refused police orders to disperse from a nearby hill, the cops attacked them with automatic weapon fire.

Who do you think they worked for: their people – or the mine operators and owners? Who did they serve and protect?

And striking miners are dying for a pittance, while owners and investors are making billions!

Striking miners are dying for a pittance, while owners and investors are making billions!

The cops of capitalism serve those who can afford their services. Period.