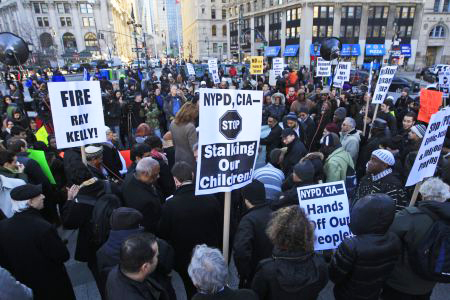 In a Pulitzer prize-winning series of investigations over the past year, the Associated Press revealed that the New York City Police Department was conducting spying operations on U.S. citizens across several states, including as far away as here in New Orleans. However, the difference in how cities have responded to the revelations highlights much of what is wrong with our local political system, criminal justice system and even media.

Compare New Orleans to Newark, New Jersey. When evidence of New York City spying activities was uncovered, it became a major story across New Jersey print and TV. Here in New Orleans, The Louisiana Weekly was the only outlet to cover the story – although the Times-Picayune did reprint the Associated Press story.

In New Jersey, politicians from across the political spectrum were quick to condemn the spying program. New Jersey’s Republican governor, Chris Christie, told reporters that he was angered by the spying. “I don’t know if this NYPD action was born out of arrogance, or out of paranoia, or out of both,” he declared at a press conference. On the Democrat side, Newark mayor Cory Booker called the spying program “offensive,” and his police chief, Samuel DeMaio, assured residents that “this type of activity is not what the Newark PD would ever do.”

When New Orleans Mayor Landrieu and Police Superintendent Serpas were asked for their comment on the actions of the NYPD, both appeared to be completely in the dark and displayed little curiosity. “To be honest with you, I think that’s the first I’m ever hearing that,” said Serpas when asked at a recent press conference. “So I don’t know anything about it one way or another. I might have to catch up.”

“I hadn’t heard about it,” agreed Mayor Landrieu, speaking at the same press event. When asked if he approved of the NYPD actions, Landrieu commented, “I don’t like getting spied on,” but had no further comment.

Mayor Landrieu has made police reform a centerpiece of his administration’s focus. Until we have a mayor and police chief take these issues seriously, reform of our criminal justice system will remain stunted.

Ryan Berni, the mayor’s director of communications, refused all follow-up requests for comment. When asked if the mayor’s office has any comment or opinion on the story, he gave this three-word answer: “We do not.”

In response to follow-up inquiries, NOPD spokesperson Frank Robertson told me, “We have researched this incident and in no way is it documented in our records.” When pressed, via email, for any opinion on the appropriateness of another city’s police department conducting surveillance activities in New Orleans, Robertson added this cryptic phrase: “Surveillance is the epicenter on crime fighting initiatives.”

This cavalier attitude is cause for concern. Mayor Landrieu has made police reform a centerpiece of his administration’s focus. When our mayor and police chief show that they don’t care about their citizens’ civil rights, and when our media and politicians treat these violations less seriously than it would be treated in other cities, it adds to New Orleans’ status as a “second-class” city, and gives all of us, as residents, second-class rights. Until we have a mayor and police chief who take these issues seriously, reform of our criminal justice system will remain stunted.

Jordan Flaherty is a journalist based in New Orleans, and the author of “Floodlines: Community and Resistance From Katrina to the Jena Six.” He can be reached at jordan@floodlines.org. This article was originally published in the Aug. 27, 2012, print edition of The Louisiana Weekly newspaper and online with the following editor’s note: “Documents recently uncovered by Associated Press reveal that the New York City Police Department traveled to New Orleans in 2008 to conduct surveillance operations. Louisiana Weekly contributor Jordan Flaherty was among the named targets of the spying.”