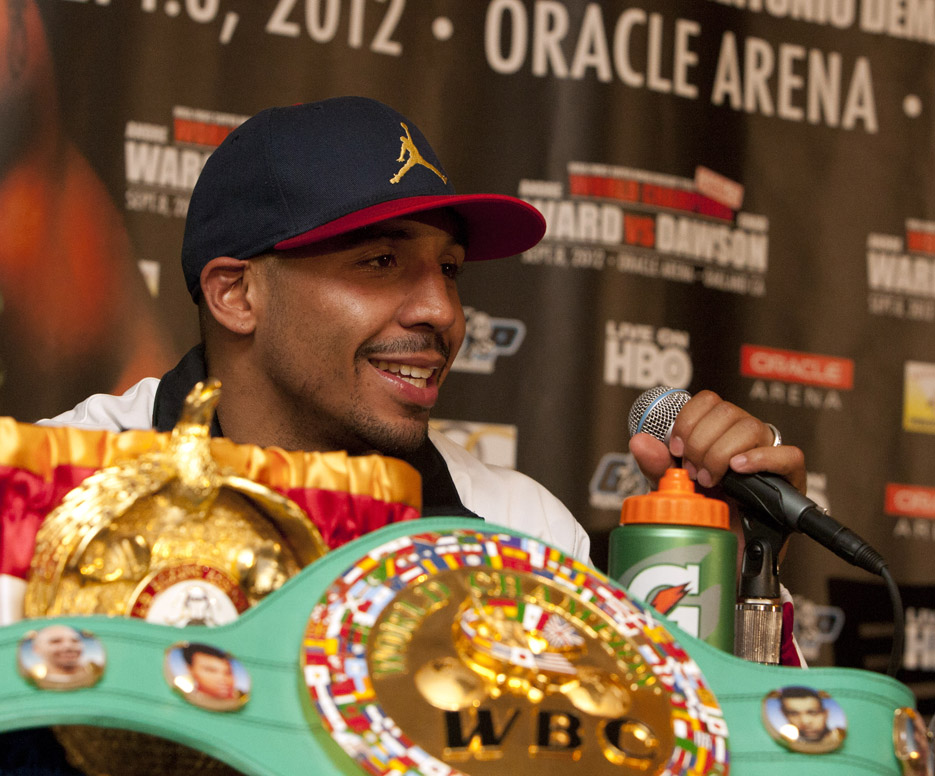 When Andre Ward stood on the ropes and raised his arms in victory after demolishing Chad Dawson, I was reminded forcefully of a similar scene when a young Cassius Clay stood next to the ropes with a raised fist after demolishing “Big Bear” Sonny Liston, and said: “I shook up the world. I’m the greatest. I am the king of the world. I’m so pretty. I’m a b-a-a-a-a-d man. I’m 22 years old and don’t have a mark on my face, and I – AM – THE – GREATEST!”

From the beginning of the World Super Six SHOWTIME Boxing Classic when I first began writing about and photographing the rise of Andre “Son of God” Ward, I’ve compared him to boxing legend Muhammad Ali.

The similarities between the two are very hard to miss.

They were both Olympic gold medalists, both very serious in their chosen spiritual beliefs, both family men, both African-American boxers doing what no boxer had done before their time, both uplifting to the sport.

They’ve won groundbreaking matches 48 years apart, via TKO, being masters of their craft, and sheer dominance of technique, under conditions in which they rose to the occasion and overcame obstacles.

And both have had a tendency to beat their opponents psychologically before they get into the ring with them – and then complete the process physically during the fight.

Note the masterful way in which the young, brash Cassius Marcellus Clay made Sonny Liston think that Clay was just short of crazy with his braggadocio, his challenges, name calling, predictions of “a total eclipse of the Sonny” and in what round Sonny would be knocked out – all of this before the actual fight! 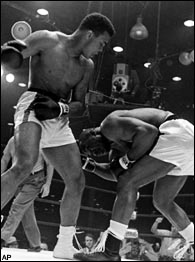 And Ali’s predictions would become legendary. In future bouts, they were unerringly true 12 times.

Mr. Ward does the same thing, albeit in a more quiet and contained manner, but still it is there, particularly if one listens carefully to what his coach, Virgil Hunter, says – or doesn’t say – prior to a fight.

Clay defeated Liston before a packed house of 8,297 at the Convention Center in Miami Beach, Florida, on Feb. 25, 1964. Even though Liston tried to rob Clay of his eyesight by rubbing Monsel’s solution on his gloves, and tried to rob him of his right to take the heavyweight championship title by faking a shoulder injury to stop the fight.

Andre Ward defeated Chad Dawson before a spectacular crowd of 8,500 at the Oracle Arena in Oakland, California, on Sept. 8, 2012, after telling Dawson that he’d let his hands do the talking on fight night and therefore had no comments at the Oakland weigh-in and Fan Fest.

The Chad wasn’t faking in the slightest when he asked center referee Steve Smoger to stop the fight after an Andre Ward barrage of punches that dropped him to one knee. His legs were gone. His right eye was deeply cut and bleeding, his head was rocked. He was through. He was done. It was convincingly over.

And “Bad” Chad Dawson didn’t attend the post-fight press conference, either. He was taken immediately to the hospital instead.

Andre Ward’s record now stands at 26-0, 14 KOs, in 16 years of undefeated boxing, amateur and professional, since the age of 12. He retains his WBA and WBC super middleweight belts. He’s won Olympic gold, the World SHOWTIME Super Six Boxing Classic, and is the reigning 2011 Boxer of the Year. 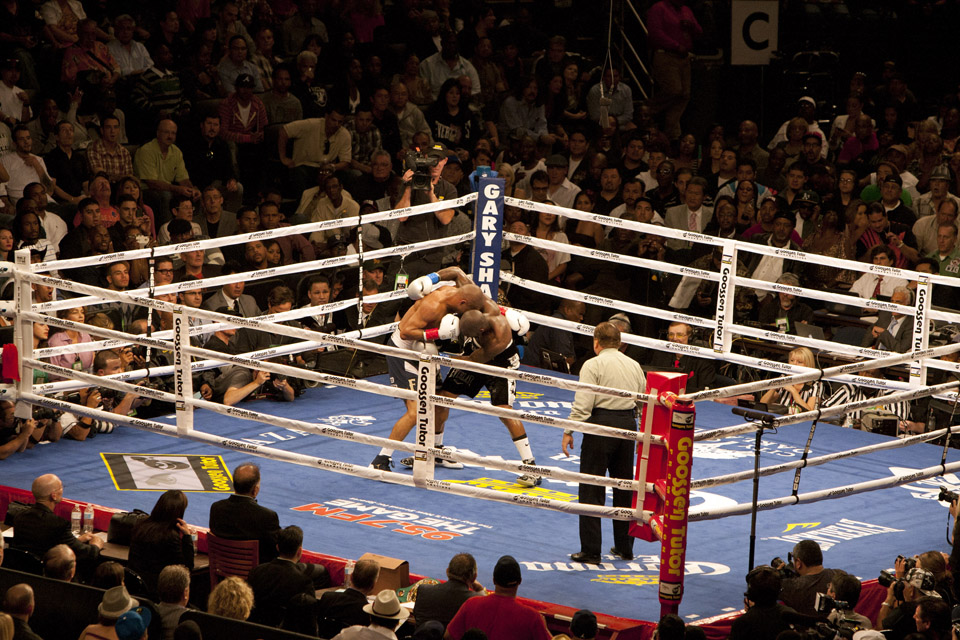 And isn’t what we’re seeing now a new champion, a new star rising and on his way to becoming the greatest super middleweight that the sport of boxing has ever known?

Sure, Andre Ward and Muhammad Ali are in two different weight classes, live two different life styles, with two nearly diametrically opposite personalities – yet they are both winners as athletes and as people, with Ward a young and upcoming master of his craft and Ali an elder in the game.

So this fight against Dawson was a Ward clinic – a fairly mild beatdown of 30-year-old Dawson who hasn’t fought anyone near his age in about six years. Had not Dawson stopped the fight, though, it could have gotten seriously ugly at the end. Ward landed 155 power punches to Dawson’s 29, according to COMPUBox** scoring, which means Dawson didn’t see most of Ward’s punches coming and was powerless to stop those he did see.

So if Dawson didn’t win any rounds – except the first round, according again to COMPUBox – and that only by a point, then he was unprepared.

That being said, was Chad Dawson qualified to be in the ring with Andre Ward and, if so, what was “Bad” Chad Dawson doing?

Obviously, the answers are no and not a lot.

It seems as though Chad Dawson defeated himself before the fight and no amount of head shaving, glasses wearing, quiet demeanor and/or weight loss could change that.

What? He thought he was going to talk Dre down, since HBO gave them both a nice build up on their “24/7: On the Road to Ward vs. Dawson” special glimpse into both boxers’ family lives? 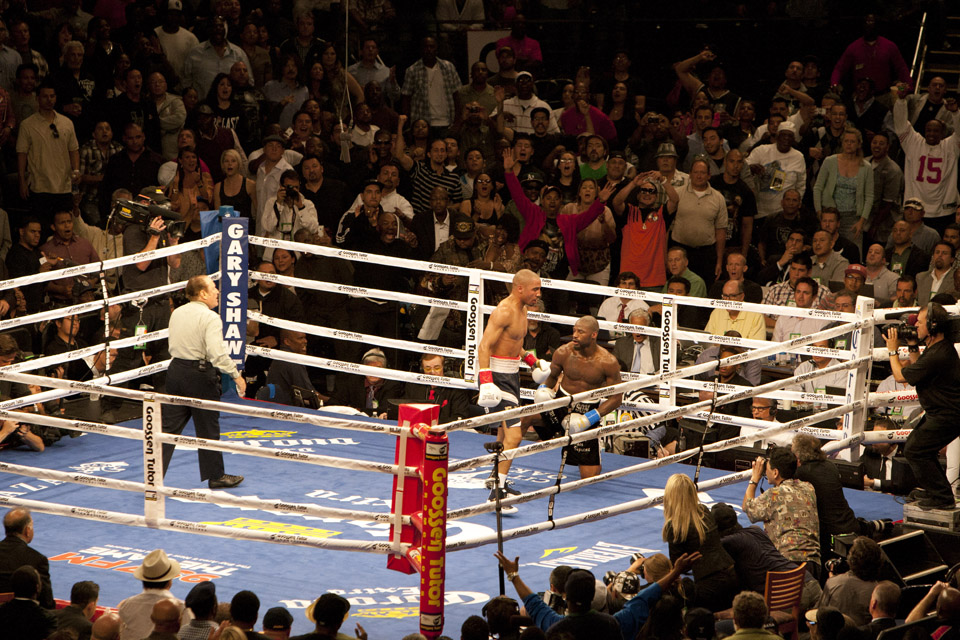 Those who say these things in all probability haven’t ever worked hard to become elite athletes, have not ever stepped into a fighting ring or put on a pair of boxing gloves, haven’t ever realized that while you can play football, basketball, baseball or golf, that you cannot play boxing.

So they really should shut up.

Boxers risk their lives every time they step into a ring – win, lose or draw. So first and foremost your head had better be on straight beforehand. And all of this “risk factor” talk should cease as well.

You fight whoever stands up in front of you. Andre Ward’s team analyzed what it would take to fight someone larger, with a longer reach advantage, someone used to fighting at a heavier weight – no matter that Chad Dawson was very thin at 168 pounds.

Then Andre Ward properly executed what he was supposed to do. And this was the key.

Ward was mentally, physically and spiritually prepared – before fight night – as Chad Dawson obviously was not. And the Chad forgot some basic survival rules: 1. Respect and study your opponent. 2. Be prepared. 3. Be yourself. 4. Don’t start fights (i.e., challenge the smaller fighter) or throw down the gauntlet – and then lose the fight. 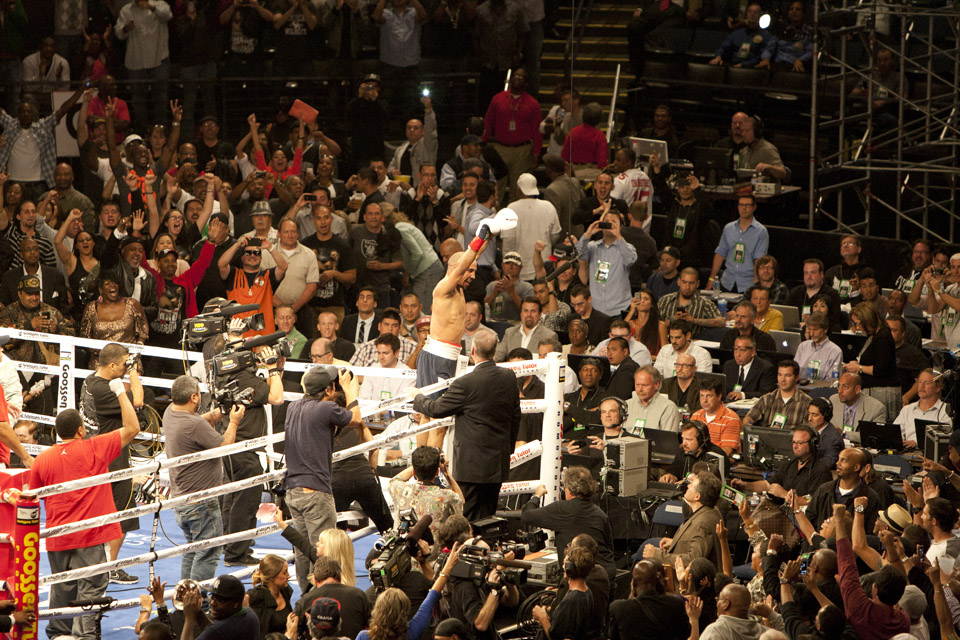 Before the fight, Chad Dawson looked thin, sterile and like he could barely put one foot in front of the other. Seven pounds is a lot of weight to lose – and adjust to that loss – and then go into a boxing ring in a fight for your life unable to execute basic survival moves.

Dawson’s team played Russian roulette with their fighter and lost a boxing match, when they could very easily have lost their fighter to serious injury. Dawson’s kung fu was not strong.* He wasn’t strong in mind, body or spirit.

Above all else, he shouldn’t have been concentrating so much on “making weight,” “dropping weight,” “catch weights” and all of the attendant hype. Developing an athlete who has the heart, mindset and skills with which to execute in their chosen sport is a necessary attribute of a coaching team when developing a world-class, elite athlete – and when the athlete is developing a life. Dawson’s team didn’t have it for this fight.

That Ward obviously has had superior coaching and the proper mindset since the age of 12, and is deepening it as he continues to develop, should be obvious.

He is fighting at about 85 percent of his boxing potential. He is bigger and stronger than he looks, and he always looks as though he is utilizing the same generalship of his strengths and resources as he does when he commands in the ring. He has full comprehension of what his body can do, as evidenced when he won a 12-round decisive victory when he “shut the Froch up” with his powerful left hand multiply fractured.

And he has the best coach in town in Virgil Hunter, 2011 Coach of the Year, who is now being dubbed “The Zen Master.”

So, how “bad” was the Chad? Well, not very – or very, very – depending upon your point of view. 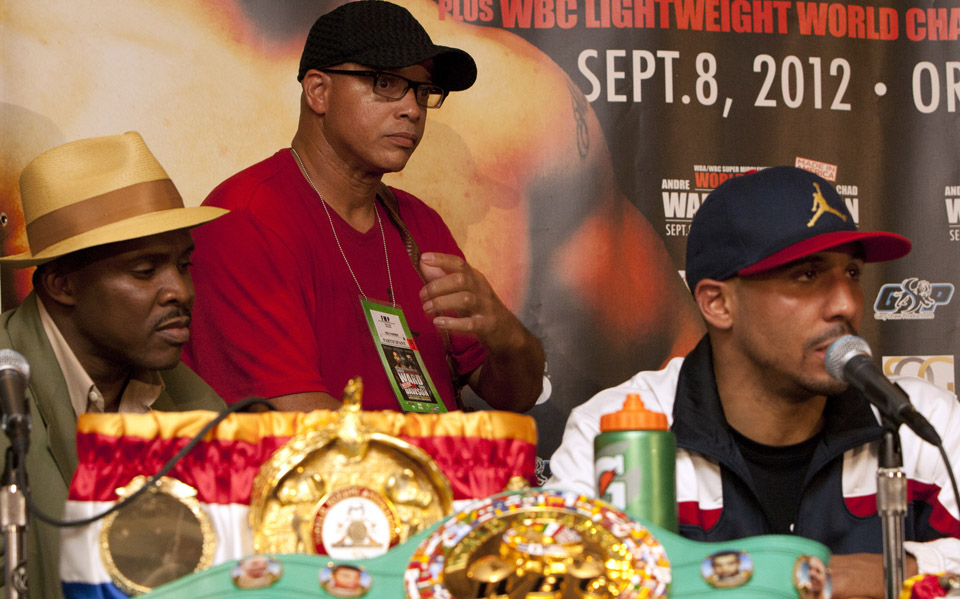 In the United States, a ward is an optional division of a city or town, especially an electoral district, for administrative and representative purposes. But even from the nosebleed seat I was assigned to work from, this photojournalist could see that the Chad wasn’t bad enough to overcome his disastrous showing in what is now Andre’s ward, O-town – Oakland – and the Oracle Arena.

In fact, Mr. Dawson should consider retirement among his career options if he continues to fight the way he did this past 8th of September 2012.

*This is a tag line from the movie, “The Core,” and refers to the computer hacking program called “Kung Fu” that was written by a computer geek with legendary skills, who participates in a scientific expedition to save Earth from catastrophe by drilling down to the core and set it spinning again.

** CompuBox is the name of a computerized punches scoring system run by two operators. It is used in boxing matches across the world and by NBC and ESPN, as well as HBO. Its purpose is to settle controversies surrounding fights by counting each punch thrown by each of the fighters, and also each punch landed, to provide fight viewers with a final punchstat count and a perception of who should ideally be given the judges’ decision in the cases where a fight goes the full distance. Each operator watches one of the two fighters and has access to four keys, corresponding to jab connect, jab miss, power punch connect and power punch miss. The operators key in the different punches as they happen, collecting punch counts and hit percentages along the way.