Dedicated to all poverty skolaz, warriors and organizers from Back East to Deep East, from Haiti to Hayward – prayers, love and survival from Hurricane Sandy to Hurricane Survival 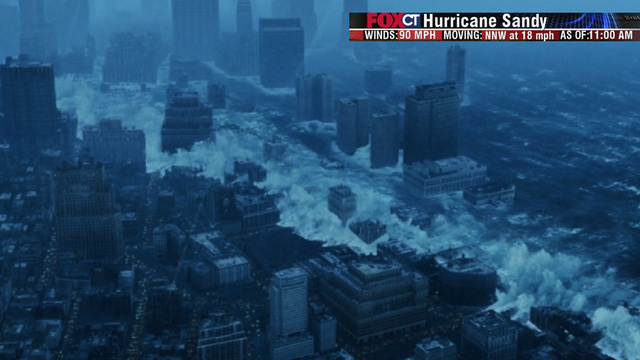 From Philly to New Jersey, from the South Bronx to Haiti, from the land of my Boricua-Afrikan mama and so many more, us po’ folks don’t need Hurricane Sandy to have a crisis, ‘cause we already in Hurricane Survival. Between gentriFUKation, removal, violence, poverty and struggle just to be housed and clothed and fed and safe, the crisis called Sandy is just one more thing to deal with in an already impossible situation.

From Rikers Island to the projects in the South Bronx, us po’ folks are always thought of last. One strike you out in a capitalist society. We gave you a chance, you had a job, you had a house, you lost that job, you lost that house, alcoholism, PTSD, veteran of illegal war, disability, substance use? Too bad for you. We gave you a bootstrap. You poor ‘cause you just lazy. So many lies of shame and capitalism.

Hurricane Sandy hit us all like a knock upside the collective head, effectively ruined a large part of the way folks get around in NYC, gave the excuse to shut off the power in the projects, close roads and make life even worse at the plantation known as Rikers Island. Folks wit’ folk made it out alive, but po’ folks and houseless folks’ evacuation doesn’t make any sense at all.

From Philly to New Jersey, from the South Bronx to Haiti, from the land of my Boricua-Afrikan mama and so many more, us po’ folks don’t need Hurricane Sandy to have a crisis, ‘cause we already in Hurricane Survival.

Where we gonna go? What little we barely have is all here in this street, in this shelter bed, in this doorway, in this food bank, in this corner sto’, in this hood. And anyway, I’m in a struggle just to stay alive every day without a “natural” crisis.

What was rarely said in New Orleans’ Hurricane Katrina tragedy is folks had nowhere to be before that hit, and it’s the same thing with Sandy.

Houseless children and families have hit a record high in New York City shelters. Over 19,000 children recorded, highest since the “Great Depression.” Foreclosures have hit elders and families of color disproportionately hard in the U.S. Thousands more are houseless in 2012.

Where we gonna go? What little we barely have is all here in this street, in this shelter bed, in this doorway, in this food bank, in this corner sto’, in this hood. And anyway, I’m in a struggle just to stay alive every day without a “natural” crisis.

Disabled elders, children, families, incarcerated people are in even more danger when the power is shut off. When floods, hurricanes and earthquakes hit, our already fragile hold on life in this system that implements the separation of people from each other – elders from youth, fathers from families, mothers from their children – means we risk imminent death.

So to my fellow po’ folks in the middle of all of this deeper crisis, it’s even more important than ever to heal our bodies. To all my brothers and sistaz still caught up in the poisons, in the violence, in tha life, if there was ever a time to wake yourselves up, it’s now. Mother Earth is mad, and Monsanto is the devil and this monster is EVERYWHERE.

But if we ain’t truly awake we can’t fight it. Those of us who, like my mama said, have the strength of youth or health to do so, stop giving our strength to the corporate and street-corporate poison and start getting ready. Ready for survival, for care-giving, for each other.

To my organizing compañeros, it’s an urgent moment in time to be changing your directions in your organizing strategies. Organizing is survival – survival from capitalism, from its poisons and its violence and its lies on corporate TV.

Learn back your indigenous ways and facilitate the healing and learning with your memberships and families, transform your spaces into gardens, hold your children close, take them away from those killer video games and computers and corporate media lies. Pray and open dialogues with each other in your streets and communities. And learn back your love for each other.

Heal yourselves/ourselves. Heal our/your land and your/our communities, even if it’s not easy. Together we can, will and are “preparing” for the rest of the storms still to come and the one that is already here.

In POOR Magazine, after 16 years of struggle, this landless, indigenous peoples movement has acquired a small corner of Pachamama/Mother Earth. With very little money – cuz POOR is in fact po’ – and mostly our people power, we are working to build Homefulness, a sweat-equity co-housing model of housing for houseless families, a school to teach back our indigenous languages, a community garden and a cafe.

Eventually we want to move completely off killer technologies, the lie of Monsanto and all blood-stained dollars-based economies to barter, sharing and community building. We ain’t there yet but we have started with the garden and we are already feeding people every week in Deep East Oakland and teaching our youth about their bodies and their communities’ health with what we can so we can eventually move our poor bodies of color into health. Our goal is sharing everything we have and everything we don’t have.

The time for collective survival is now. To all my organizer compaz, slice off 10 percent of your already-stuffed-wit’-too-much week and spend some time helping your folks heal. We all know – those of us who care for folks, without the lie of bootstraps, but filled with the love of struggle, of experience, of pain, of loss – that if we got our heads clear we got to be getting the collective backs of our folks who ain’t gonna be able to.

Heal yourselves/ourselves. Heal our/your land and your/our communities, even if it’s not easy. Together we can, will and are “preparing” for the rest of the storms still to come and the one that is already here.