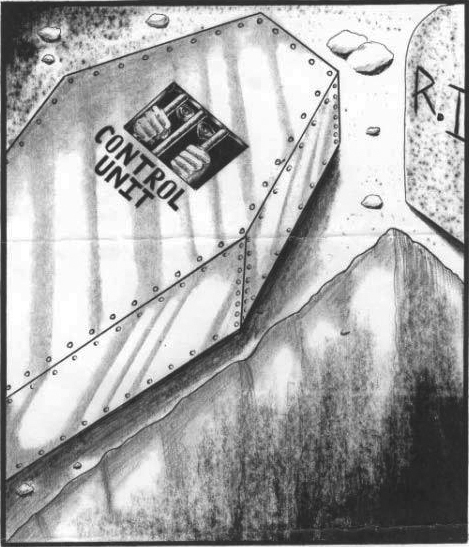 Though I have been active in the struggle for practically all my life, from a Panther cub to an urban guerrilla in the service of the underground, I have never considered myself to be a writer or at least not a good writer, but I felt it was imperative for me to conjure up whatever hidden skills I may possess to find the words to articulate this man-made construct that many of you out there call the prison industrial complex. For many of us trapped within its catacomb of solitary madness, this man-made construct of nefarious intent possesses a more sinister title: the vortex of dementia.

For the vast majority of us, when we initially entered these gates of hell, the protection of our physical being was of paramount concern, not realizing the booty bandits were the least of our worries. This realization doesn’t become manifest in its fullness until we enter into its twisted, officially sanctioned vortex in the Security Housing Unit, or SHU, where our inherent stability becomes subjected to conditions specifically designed with both deliberate and malicious intent to disfigure our basic grasp on our sanity. Often times these conditions are subtle, but very effective nonetheless.

My first three years in the Security Housing Unit (SHU) were a blur. Any attempt to probe my sanity was undetected by my conscious awareness. But it was my fourth year in isolation that my captor’s motives revealed themselves. While in the Adjustment Center at San Quentin State Prison, I was arbitrarily placed in the “quiet cell” – no running water, no lights, no mattress or blankets, just my boxer shorts and T-shirt.

I didn’t sleep at all that first night; I was still trying to wrap my sensibility around my new reality. The cell had the stench of urine and fecal matter and on each side of my cell there were screams of torment and constant banging on my walls, obviously an attempt orchestrated by my captors to deprive me of sleep while I contemplated the now visible probes into my sanity.

For many of us trapped within its catacomb of solitary madness, this man-made construct of nefarious intent possesses a more sinister title: the vortex of dementia.

Many of you who are unaware of the overall objective of the prison industrial slave-complex may be quick to dismiss the above experience as an aberration, not an elaborate scheme designed to break the spirit and torment the minds of its captives – the New Afrikan revolutionary prisoners in particular. On the 10th day of being in the quiet cell, my neighbors were informed that if they did not kick on my wall late at night, they’d not be removed from the quiet cell, a clear incentive for their complicity to facilitate my captors’ endeavors to rob me of my sanity.

For an entire month my neighbors kicked on my walls, so losing myself in sleep to escape this psychological torture was not an option. I was forced to confront this deliberate assault on my sanity. This scheme would repeat itself two more times, each time longer than the next. The second time was approximately 45 days and the third time was 90 days.

Then I was emergency transferred to old Folsom in 1985. San Quentin State Prison had told the Folsom administration that I was involved in a conspiracy to murder staff, which was a blatant lie. I was not even in the unit where the guard was killed. But this lie was designed to evoke hostility and violence upon my arrival to Folsom. 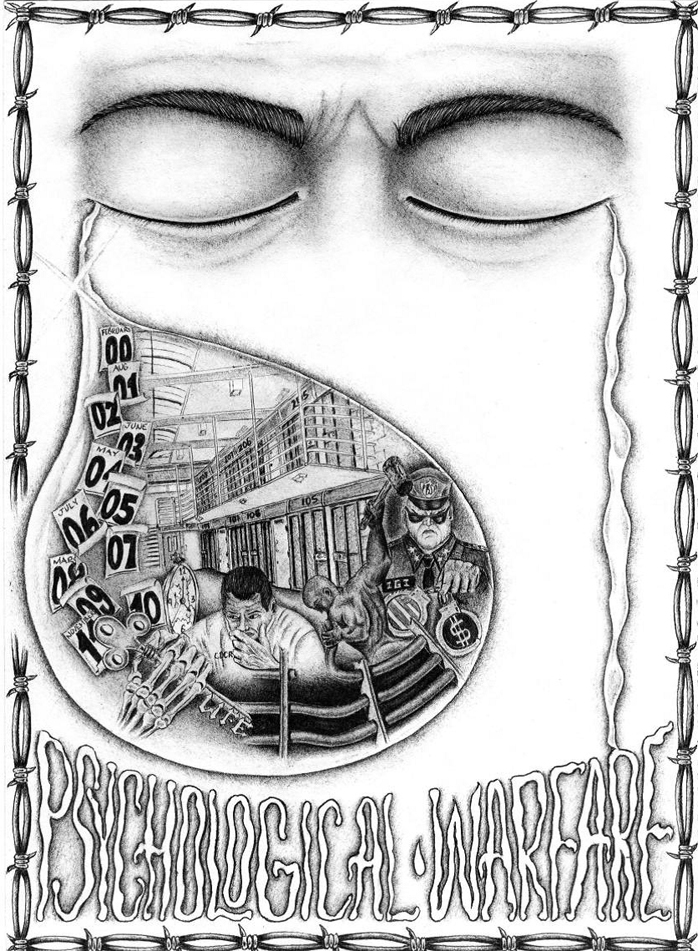 Their plan worked. When I got to Folsom, I was placed in four-point restraints on a table butt naked. This went on for three days. I was then placed in the quiet cell in 4-A for an additional six months. Then in 1987 I was placed in the first ever bedrock unit – I along with 24 white prisoners. I was the only New Afrikan (Black) prisoner assigned to this unit and spent approximately eight months in an environment designed to encourage a physical attack on me.

I was eventually released from Bedrock (i.e. Behavioral Control Unit) once my captors realized their plan didn’t work. About four months later, I was placed back into Bedrock where I spent over a year. Both Corcoran and Pelican Bay State Prison were modeled after the Bedrock units. My second return to Bedrock was under the false allegation that I was involved in a conspiracy to assault prison staff. In response to this fabricated charge, I was physically assaulted and Tasers were placed on my testicles while I was handcuffed behind my back.

The above experiences represented the traditional methods of both psychological and physical torture, each challenging the resilience of my mental health, which I admit was beginning to succumb to the seduction of dementia.

Then in 1989, I entered the gladiator yards of Corcoran State Prison, where fights were staged daily for the pleasure of sadistic pigs. Though I received only two disciplinary reports, I was involved in at least 14 staged fights – another experience that took a toll on my already exhausted sanity.

Then 22 years ago, I entered the cold corridors of Pelican Bay State Prison that have exposed me to a new form of mental torture, a more subtle but sophisticated and systematic assault on one’s senses, a deprivation so complete that it leaves one drowning within the depths of one’s own emptiness. This was (and is) a sanctioned assault of attrition being waged upon our mental health, a constant probing of our undiagnosed psychoses. Dementia was beginning to look more enticing, as I watched hundreds of prisoners around me surrender to the temptation of insanity, an escape from the harsh reality of sensory deprivation.

Many have asked how I’ve survived 30 years of solitary confinement isolation under constant assault on my mental state? I tell them, first of all, my ordeal is far from being over, so I have yet to survive my isolation, but I’m surviving in spite of my (our) situation.

For me, I believe identifying the symptoms is essential in resisting the attraction of dementia. Many convicts, because of the stigma attached to dementia, deny any symptoms. I don’t care who you are; anybody who has spent 20 years or more in solitary such as the Security Housing Unit is going to have some symptoms. Though they may be subtle, they have the potential to mature into a full blown psychosis, if ignored. This is why I believe that embracing the symptoms helps us to subdue them. I recognized my symptoms 20 years ago and I refused to give into them, but it is a constant battle. Dementia is forever present, waiting to claim our sanity.

I entered the cold corridors of Pelican Bay State Prison that have exposed me to a new form of mental torture, a more subtle but sophisticated and systematic assault on one’s senses, a deprivation so complete that it leaves one drowning within the depths of one’s own emptiness.

Before I close, I would like to briefly touch on a hypothesis that I’ve yet to hear anyone speak on, which I believe is worthy of further examination, and that is the Stockholm Syndrome. Many people became aware of this syndrome during the Patty Hearst trial, when she was witnessed on camera robbing a bank with her alleged captors. Simply put, the Stockholm Syndrome is when a captive begins to emulate the characteristics and/or belief system of his/her captor(s).

Many prisoners don’t have a clue that they are emulating the same cowardly and immoral practices of their captors. I provide you with two brief examples:

1. First of all, the prison guard is an active participant within the CDCR-sanctioned torture scheme. Guards will identify a number of noises that they believe will serve to agitate and/or irritate prisoners. For example: loud whistling, slamming our food port, stomping up and down the stairs while we sleep, talking loud over the PA system, just to name a few. Once identified, staff would begin to incorporate these cowardly tactics in their daily routine.

2. The Security Housing Unit (SHU) is a deliberate construct, and sensory deprivation is the product of a sick mind. Anyone who manages and profits from such a destructive scheme is void of any sense of humanity, especially when she/he can work in this environment and completely ignore the impact it is having on its captives.

You often become a product of your environment. If it’s devoid of any sense of humanity and moral redemption, it is going to produce a product of like values. Many prisoners upon release are emulating the lack of humanity and redemption displayed daily by their captors; unfortunately, society suffers as a result via reoffending. That’s a deliberate ploy designed to guarantee their return and the survival of the prison industrial slave-complex.

Many have asked how I’ve survived 30 years of solitary confinement isolation under constant assault on my mental state? I tell them, first of all, my ordeal is far from being over, so I have yet to survive my isolation, but I’m surviving in spite of my (our) situation.

I ask, what can you produce from a depraved environment? I believe recidivism has a mental component that is directly linked to our captors.

Being in prison alone has an impact on our mental state. But within the control unit prisons, there exists a deliberate and systematic assault on our sanity with a clear purpose. If state departments of corrections and the federal Bureau of Prisons can weaken our mental stability, we then become more vulnerable to the trappings of recidivism.

A disciplined mind allows us to resist any temptations that can bring us back to prison, such as drugs and alcohol or even negative friends. The key to resolving this matter lies with us as prisoners.

The prison system and the SHU is not going to shut down anytime soon. So we will have to be more realistic and pragmatic in our approach to addressing the mental health of prisoners. We can start off as prisoners by pledging we’ll not become collaborators with the CDCR in their endeavor to assault our sanity!