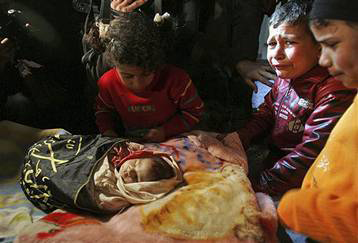 This morning Israel ended an effective truce with armed groups in Gaza and carried out the extrajudicial execution of Ahmed al-Jabari, the commander of the military wing of Hamas.

Aside from the fact that it almost always violates truces and ceasefires, seeking escalation where instead there could be calm, what motives might Israel have?

Israel’s “Minister of Home Front Defense” Avi Dichter says Gaza must be “reformatted” as if it were a computer hard drive, just like Israel did in the West Bank in 2002 during a series of massacres it called “Operation Defensive Shield.”

Israel’s Ynet reported in Hebrew that Dichter “said in a closed meeting, in the course of his visit in the South under the escalation, that ‘there is no other choice, Israel must carry out a formatting action in Gaza, actually format the system and clean it out, the way we did in Judea and Samaria during Operation Defensive Shield.’ Dichter added that it is only in this way that the military deterrence will return.”

Israel credits these attacks with turning the Palestinian Authority (PA) into an even more obedient partner of the Israeli army in suppressing Palestinian resistance. In the 2000s, under the supervision of U.S. Gen. Keith Dayton, PA forces were re-made into a more effective Israeli proxy force to suppress any resistance, particularly from Hamas.

Ron Ben-Yishai, a Ynet columnist with close ties to the “security” establishment, wrote that the attack on al-Jabari and other anticipated attacks “was planned a long time ago, but it was postponed due to the election campaign.”

Ben-Yishai did not specify whether he was referring to the U.S. election that saw President Barack Obama re-elected on Nov. 6 or the Israeli election scheduled for January.

The goal, claims Ben-Yishai, is to “restore [Israel’s] deterrence through a series of painful attacks on top military figures and assets belonging to all the terror organizations in Gaza, with an emphasis on Hamas.”

Dichter’s call for “Defensive Shield”-like devastation and killing has been echoed in the Israeli press. Reuven Berko, a commentator in Israel Hayom, wrote:

“Israel must not serve as a capricious victim of one or the other organization of bearded persons. It must bomb the [Gaza] Strip and cause unprecedented damage to activists and infrastructure, without exposing its soldiers to direct contact. Gaza is a chronicle of sisyphic combat, which will be decided in deterrence founded on damages [described] by orders of magnitude, so each individual soldier should be spared. Since the alternative for the Hamas leadership is already ready in Gaza, only a very few of the old timers should be retained as a ‘focus of knowledge,’ with [this knowledge] burnt into their consciousness, to retain the memory and the deterrence.”

Effectively, Berko is calling for mass elimination of existing leadership and its replacement with one more pliant to Israel’s wishes.

As Ben-Yishai acknowledged, Israel’s escalation of attacks on Gaza began not – as Israeli propaganda usually claims – after Palestinians fired rockets toward civilian areas, but after Palestinian resistance fighters targeted and hit Israeli forces enforcing the siege and occupation of Gaza.

It was Israel that “retaliated” by shelling civilian areas killing and injuring dozens of civilians in recent days. Before today’s additional victims, Israel’s attacks had claimed a high toll on Gaza. Between Nov. 8 and 13, Israel killed six Palestinian civilians in Gaza, including three children, and injured 52 others, including 12 children and six women, according to the Palestinian Centre for Human Rights. 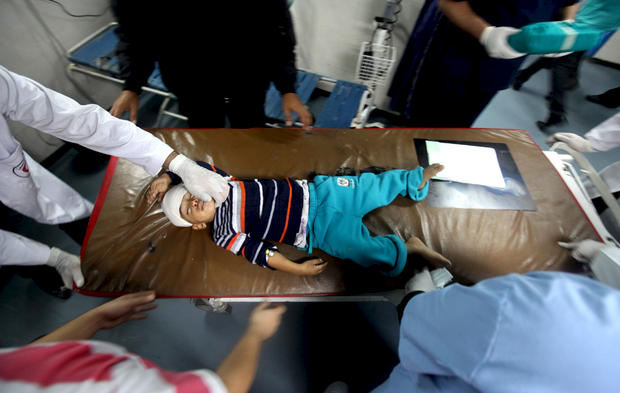 While today’s attacks are defined as “limited” and even “surgical” in Israeli terms, that is not how they are seen in Gaza.

“Gaza has been enduring Israeli policies of extermination and vandalism since 2006. We reiterate our condemnation of the international conspiracy of silence and Arab impotence in the face of these continuous Israeli crimes,” said the One Democratic State Group in a statement, also signed by the University Teachers Union and the Palestinian Students’ Campaign for the Academic Boycott of Israel.

“We note that not a single action against Israel has been taken by any Arab country. Will the Arab Spring stand aside and watch while we are being butchered? Empty rhetoric will no longer be accepted. Words of condemnation have to be translated into action.”

The statement called for an escalation of global campaigns of boycott, divestment and sanctions and other forms of protest against Israel.

With thanks to Dena Shunra for translation.

Ali Abunimah is the author of “One Country: A Bold Proposal to End the Israeli-Palestinian Impasse” and co-founder of The Electronic Intifada, where this story first appeared. He can be reached via info@electronicintifada.net.

Emergency protests in San Francisco against the Israeli invasion of Gaza

Protest rallies will be held on both Thursday and Friday, Nov. 15 and 16, at the Israeli Consulate, 456 Montgomery St., at California, San Francisco:

The Israeli military has just announced a large-scale ongoing invasion of Gaza. Many Palestinians have already been killed, with talks of a ground operation soon to come. This is the biggest escalation in Gaza since the massacres of 2008-2009.

STOP the war on Gaza! Stand against the U.S. support of Israel! Support the Palestinian people!

Stop the attacks on Gaza now!

Al-Awda, the Palestine Right to Return Coalition, calls on its members and all supporting organizations and individuals to organize demonstrations in front of Israeli embassies and consulates, federal and other locations to demand an end to the ongoing Israeli aggression and siege of the Gaza Strip.

On Nov. 9, Israel’s army killed a teenage child playing soccer in Gaza and then launched an unprovoked bombardment of the Gaza Strip which killed seven Palestinians and injured more than 40, and to which the resistance responded. Subsequent Israeli attacks led to more deaths and injuries and culminated today in the assassination of Ahmed Jabri, second in command of the Military Wing of Hamas, and nine other people throughout Gaza. Further, Israel formally announced that it has launched a ground invasion of the Gaza Strip, saying they’ll be in Tal Alhawa within 24 hours. This is an area in the middle of densely populated Gaza City.

We call on all people of conscience to organize emergency demonstrations and demand Israel immediately stop its attacks on Gaza. We also demand that the Israeli and Egyptian governments immediately END THE SIEGE OF THE GAZA STRIP and grant immediate access to all food, humanitarian and medical relief supplies without restriction.

The Strip is home to 1.5 million Palestinians, 80 percent of whom are refugees denied by the Zionist state the right to return to their homes and lands of origin from which they were expelled by the Zionist occupation in 1948 and thereafter. Nearly half of the Gaza population are children who, along with the elderly and ill, remain completely deprived of food, water, fuel, electricity, humanitarian relief and medical supplies or facilities.

In Cleveland, please join us Friday, Nov. 16, at 4 p.m. For further information or to endorse, contact Abbas Hamideh, resistance48@aol.com.

In South Florida, please join us Saturday, Nov. 17, at 2 p.m. For further information or to endorse, contact Anas Amireh, fuktheoccupation@yahoo.com.

In New York, please join us Thursday, Nov. 15, 5 p.m., in front of the Israeli Consulate, 42nd Street and Second Avenue.

For a comprehensive list of demonstrations around the world, click here for Emergency Global Actions for Gaza.

Voice your outrage at Israel’s attacks on Gaza

Please call the following officials and demand they stop the attack on Gaza NOW!

Al-Awda, the Palestine Right to Return Coalition, can be reached at P.O. Box 131352, Carlsbad CA 92013, (760) 918- 9441, info@al-awda.org, http://al-awda.org. Al-Awda is the largest network of grassroots activists and students dedicated to Palestinian human rights. We are a not for profit tax-exempt educational and charitable 501(c)(3) organization as defined by the Internal Revenue Service of the United States of America. Under IRS guidelines, your donations to PRRC are tax-deductible. Bay View staff contributed to this story.