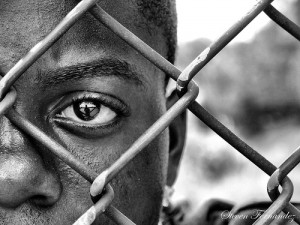 When Bobby Maywether was pardoned, he was suddenly released back into the free world from San Quentin’s Death Row, where he had been imprisoned for the previous 12 years. Considering his burden of terrible childhood abuse compounded by the violence and cruelty of prison life, it is no surprise that the horror of Death Row did not serve as a deterrent to his immediate return to drugs and crime.

Bobby left prison more wounded and traumatized than he was when he arrived. It would take several more years and suffering a serious stroke caused by his use of crack cocaine for him to begin his spiritual path of healing.

Bobby had been out of prison and free of drugs for several years when I first met him. He was managing a sober living facility not far from my nonprofit’s office and had heard about our work with incarcerated teens. Bobby was interested in what we were doing and went out to the probation camps with us to see the program in action. He soon became an important member of our team, courageously sharing his life experiences with the teens and serving as a clear and compassionate mentor.

Through his personal spirituality and recovery from drug addiction, Bobby had transformed himself into a kind, gentle and caring man, one who bore no resemblance to the drug-crazed killer who had been sentenced to death. Although he was an intensely private person, I was privileged to know him well and to consider myself his friend.

He rarely spoke about the details of his crime; however, his remorse was evident in his devotion to works of service and redemption. For the last five years of his life, Bobby was a beloved member of the Catalyst staff. During this time, he created hope and healing for thousands of traumatized teenagers, whose lives may have been very different had Bobby been executed.

Bobby Maywether created hope and healing for thousands of traumatized teenagers, whose lives may have been very different had he been executed.

Knowing Bobby crystallized my conviction that the death penalty is wrong. However, I continued to believe that life without the possibility of parole was a reasonable alternative to traditional forms of execution. I now know that could not be further from the truth.

In 2004, I began to work with adult prisoners, teaching a course called “Creating a Healing Society,” which focused on the role of childhood abuse and trauma in criminal behavior and empowered participants to address these issues as part of their personal path of rehabilitation. Since then, I have gotten to know many prisoners serving life without parole, and their stories are remarkably similar.

I have gotten to know many prisoners serving life without parole. The vast majority had committed their crimes between the ages of 18 and 25, and now, as middle aged men, are completely unlike the violent young people they once were. Yet, no matter what their efforts, only their deaths will release them from imprisonment.

The vast majority of these individuals had committed their crimes between the ages of 18 and 25, and now, as middle aged men, are completely unlike the violent young people they once were. I have met many good and decent men among the prisoners in my course, people who have accepted full responsibility for their actions and who have done all they can to make amends and give back to the communities from which they have taken.

These are people I would not hesitate to have as my neighbors. Yet, no matter what their efforts, only their deaths will release them from imprisonment. Witnessing the suffering of these human beings, who just as surely have been condemned to death as those sentenced to die by lethal injection, is every bit as painful as witnessing the grief and loss of those victimized by their crimes.

Recently, I read an extraordinary manuscript for a forthcoming book, “Too Cruel, Not Unusual Enough,” a unique collection of essays and poetry by life without parole prisoners. It is, quite simply, devastating. For those who have not had the privilege, as I have had, to be allowed a view into an aspect of humanity hidden away from public consciousness, reading this book will be a life-changing experience, after which it should be impossible to consider life without parole a “reasonable” alternative to anything.

Reading this book, “Too Cruel, Not Unusual Enough,” will be a life-changing experience, after which it should be impossible to consider life without parole a “reasonable” alternative to anything.

Which brings me to Proposition 34. Voting against it means I want the state to continue to actively kill people by shooting poison in their veins. Voting for it means I want the state to sentence more people to the slow, excruciating, grinding form of the death penalty that is life without parole. In the end, I really have no choice but to abstain and commit myself to working towards a truly restorative justice system, one in which the suffering of all involved can be healed and all forms of the death penalty have been abolished.

Susan E. Lawrence, M.D., is the founder and CEO of The Catalyst Foundation, a Southern California-based nonprofit organization whose mission it is to decrease the impact of childhood abuse and trauma on society and the world. She is a James Irvine Foundation Leadership Award prize-winning finalist for her work towards creating transformational change and healing within prisons. Susan can be contacted at catalyst@qnet.com, www.catalystfdn.org or by mail at Catalyst Foundation, 44758 Elm Ave., Lancaster CA  93534. For more information about “Too Cruel, Not Unusual Enough,” which will be released in early 2013, please visit www.theotherdeathpenalty.org.