by Lisa “Tiny” Gray-Garcia, daughter of Dee, mama of Tiburcio

Her UGG boots rested delicately against her matching leggings while her $800 dog sniffed a man who was sitting on the sidewalk near a planter in the skid row area of Los Angeles. He was accompanied by a shopping cart which contained several neatly layered black hefty bags piled on top of each other. 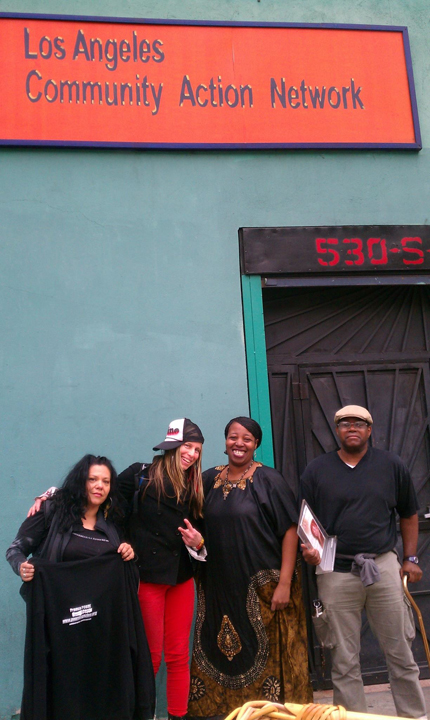 It had been over 20 years since me and my mama were houseless on the streets of LA, sleeping in our car and facing police harassment for the sole act of being poor and without a roof in the U.S. The only place we could go to get a break was skid row because it was the one place the police seemed to leave us alone.

Now I was back, with my fellow Po’ Poets/Poetas POBRE’s of POOR Magazine to speak with, be with and share with sisters and brothers at LA Community Action Network for the Voices in Poverty Resist Series. But something was bizarrely wrong.

Now the streets of skid row, where so many of us poor people go because we can’t go anywhere else, were filled with high-end stores called Pussy Pooch and Bark Park, selling personalized dog portraits and hand-made cat sweaters, rich people restaurants, ladies with designer dogs living in elevated gated communities and “artist lofts” built on the top of single room occupancy hotels (aka poor people hotels) and the final irony, street after street colonized by movie industry companies for movie sets, using this poor people enclave because it leant “authenticity” to their “crime dramas.”

“We are constantly police harassed down here,” said Mary X, an African descendent mother of three who lives in a single room occupancy hotel off of Sixth Street in Skid Row. “The cops ride up on you for no reason and ask you where you are going or what you are doing. I no longer stay in a shelter because every time I did they would threaten to take my children away.” Mary’s voice trailed off as she spoke the last sentence.

“I am a good parent. My children go to school on time and are fed, clothed and loved. Isn’t that enough?” Mary concluded our conversation because she had to pick up her 6-year-old son from his after-school program.

Mary and her little family were just a few of many people we spoke with living in the now deeply gentrified skid row area of Los Angeles, struggling with poverty, meager welfare or Social Security payments, overpriced rent or, like Mary, holding down two or three low-paying jobs just to survive. But notwithstanding all of those challenges, one of their biggest foes was the increasing gentrification, subsequent displacement and never-ending police harassment of skid row, which is similar to so many of our poor peoples of color neighborhoods across California and the nation.

“We are constantly police harassed down here,” said Mary X, an African descendent mother of three who lives in a single room occupancy hotel off of Sixth Street in Skid Row. “The cops ride up on you for no reason and ask you where you are going or what you are doing. I no longer stay in a shelter because every time I did they would threaten to take my children away.” Mary’s voice trailed off as she spoke the last sentence.

The position of poor families, houseless families, elders, adults and youth is always under attack – mostly to perpetrate the myth that so-called “real poverty” doesn’t exist in the U.S. – and so if we appear on the streets with our belongings, in shelters with our children, in our cars with our blankets, or in doorways or empty lots with the jacket on our backs, we are constantly under scrutiny, police supervision and/or forced to be engaged in social work provision whether we want it or not. The intensity of this scrutiny seems to rise and fall and be at the mercy of where rich people want to dwell.

In this way our stories as poor people in urban areas across the nation and arguably the world are tragically connected. And for our rural brothers and sisters in poverty, our stability hangs in the balance depending on if we happen to be living on or near a natural resource like water, precious metals, natural gas or a potential waste dump location.

According to the mainstream society, there is no “space” for us. Real estate and so-called “market forces” take priority over human beings, especially those of us poor human beings who don’t fit into the myth of the bootstraps used by media and legislators to rationalize the hate and criminalization we constantly face.

No, it doesn’t matter about institutional racism, classism, white supremacy or corporate theft of land and lives, how hard our lives are, how many times we have tried to make it like me or my mama, or how hard we work like Mary X – we are still “lazy,” stupid or “the homeless people” who only deserve to be sniffed by dogs. This is why it is urgent for us to be writing, investigating and documenting our own self-determined stories in our own voices, asserting our own solutions and actively fighting for our civil and human rights.

Write them like folks are doing with the Equal Voice Project, like we do at Prensa POBRE/POOR Magazine and the Bay View newspaper, and fight for them like our brothers and sisters at LA Community Action Network. They have been fighting the business improvement districts and the private security forces and the police harassment by launching their own “security force,” which they call CommunityWatch, as an alternative private security presence in the community as well as working in tandem with Western Regional Advocacy Project (WRAP) to fight for a much needed Homeless Bill of Rights.

To create this important document, WRAP members created a Without Housing Organizers Toolkit, which connects the dots of the deep and violent cuts in housing budgets, the police enforcement of streets for business interests and the ways in which poor and houseless people end up being targeted as criminals for the sole act of being poor.

Later that day we drove out of the now oddly bourgeois skid row, which in addition to all the designer pet stores and gated condos was covered in police patrols. I saw the man who’d been subjected to the dog sniffing earlier. This time the police were issuing him a citation and throwing his belongings in a dump truck.

It is urgent for us to be writing, investigating and documenting our own self-determined stories in our own voices, asserting our own solutions and actively fighting for our civil and human rights.

by Steve Richardson aka General Dogon

My name is General D, and I was born and raised on skid row, got into my addiction on skid row, was arrested for bank robbery (feeding my serious addiction) and sentenced to 18 years in state prison. I entered state prison as a brain-dead Christian and leader of Denver Lanes Blood gang in South Central. I was sent to Corcoran SHU program where I did five years in the hole.

There I met George Jackson’s comrade who had been in the hole since 1972. He re-educated me about who I am as a Black Hue-man, about God, and the principles of revolution. Basically I did the Malcolm X transformation: came into prison a mis-educated gang member and paroled as a member of the Black Guerilla Family in 2004. 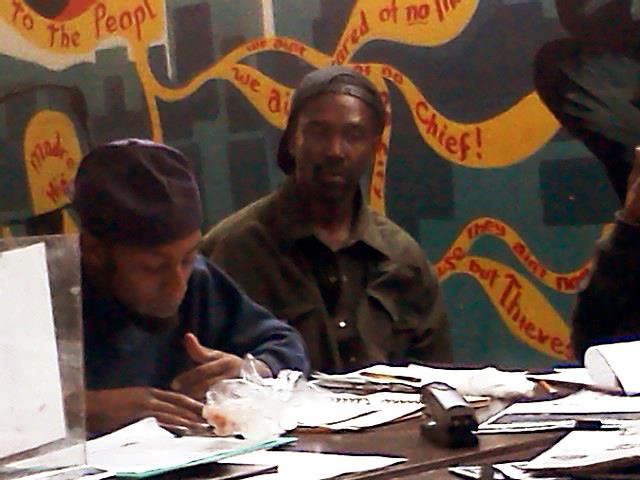 After 11 years I didn’t know what I wanted to do, but I knew I wanted to fight for social justice. I came to LA because I had a complaint about the police and private security guards. I was told by Bilal Ali, a Black Panther, “We don’t talk about it; we be about it.”

He gave me a camera and clipboard and said go get some evidence and come back. I went, got evidence of police and private security guards racial profiling and targeting low-income Blacks during gentrification. I came back to LA CAN. Bilal, Pete White, the director of LA CAN, and I talked. We decided to create a community watch program to monitor LAPD and private security to ensure no biased policing was going on.

In 2006, LA Mayor Villaraigosa and Police Chief Bratton released a Safer Cities Initiative on skid row which brought 110 extra pigs to skid row, making it the most policed community in America. Their goal was to gentrify skid row.

They had a six-month plan to wipe out poor folks so that the yuppies can walk their $5,000 French poodles down Main Street without seeing Ed the wino and Ted the panhandler. For the last six years since then we’ve been at war fighting for the land, and LA CAN has led the charge.

I was told by Bilal Ali, a Black Panther, “We don’t talk about it; we be about it.”

I’m the point man on our community watch team. I was sitting in meetings with Mayor Villaraigosa, meeting with Chiefs Blatter and Beck. I’ve been to the LAPD training camps giving them information on how not to participate in racial profiling. I’ve been to LAPD 4K trainings on policing people with mental disabilities. I’ve helped ACLU bring lawsuits against the city for violating rights of homeless people. I’ve worked with UCLA to document police brutality. I’ve been in many newspapers, books and movies.

I’ve been arrested for felony and facing 25 years to life twice for doing this work. The United Nations has requested information about me because of a report they got saying the government is targeting me.

And the story goes on because I’m still fighting daily. As a three-striker my biggest fear is being struck out with 25 to life before I can finish my mission. Can’t stop, won’t stop. All power to the people.