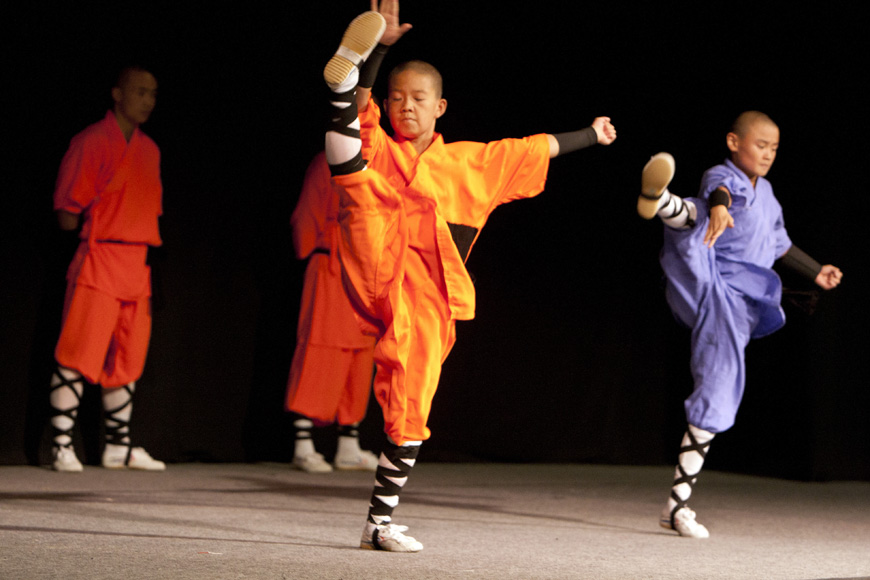 Recently I went to the Marin Veterans’ Memorial Center in San Rafael, where the famed Shaolin Warriors of China were to give a performance in display of their hand-to-hand and weapons martial skills. The troupe of 20 Shaolin monks were on the second leg of their fall 2012 North American Tour, and the performance, produced and owned by China Performing Arts Agency Productions, Ltd., was designed to be a dazzling display of gung-fu couched in a “theatrical display” of a “sacred and deadly art.”

Additionally, the Academy of Tae Kwon Do in San Francisco, where I am a student, was accorded a rare, once in a lifetime 15-minute special performance, a quarter hour prior to the show.

I was excited, and both the pre-show performance and the two hour show went without a hitch to a nearly full to capacity auditorium audience, who were so impressed with the monks, their performance, and the short gung-fu lesson given to a crowd of small children from the audience that the ensuing three standing ovations lasted from two to three minutes each.

Nigel BFG, in his article, “Short History: The Nuba and the African Origin of ALL Martial Arts,” published in the Black Karate Federation Magazine in 1999 and revised in 2000, states:

“As popular as the martial arts was and continues to be, less than one percent of Africans in diaspora and only a slightly higher percentage of Asians and Europeans are aware that the true origins of these magnificent arts are in fact African! Many African teens who fantasized themselves becoming the powerful Karnak (a superhero of comic legend), will be surprised to learn that Karnak was actually named after an ancient African temple in Egypt, and that the very name of his ancient discipline bespoke its origin. It is only recently that modern science and anthropology has agreed to admit that all human life shares a common point of origin in Africa. It was a watershed day, therefore, when the untold origins of the oldest martial arts on Earth were explored and documented in my 1990 book titled ‘Nuba Wrestling: The Original Art.’

“While not in general circulation, it is heralded as a landmark publication because it was the first global acknowledgement of Africa as the birthplace of the martial arts and sciences.”

Documentation of the earliest records of the martial arts can be found in Wesley Snipes’ documentary, “Masters of the Martial Arts,” as well as in Kalindi Iyi’s “African Roots in Asian Martial Arts” (Journal of African Civilizations, 7, 1:138-143).

With specific reference to Shaolin gung-fu, the Black Karate Federation article goes on to state:

“Buddha’s background and principles of thought can be traced to the Black people in India known as Dravidians,” as inherited from India’s older Black civilization known as Harappan, which is in turn the progenitor of the monk Bodhidharma, who left southern India for China in 520 A.D. to found and spread the teachings of Buddhism.

Within the Shaolin monastery, the disciplined spiritualism of Buddhism was based upon the teachings of Siddharta Gautama, to which Bodhidharma added a “prescribed set of exercises and movements to keep the monks healthy and awake during meditation.” Based upon the attack and defense movements of “seven sacred animals” that lived near the monastery, “these movements, and breathing exercises became known as the 18 Hands of Lo Han, and formed the basis of Chinese Shaolin Kung-Fu and, later, Japanese karate (although it must be noted that the indigenous Ainu on the island of present day Hokkaido, Japan, contributed significantly in the transmission of the martial arts to those islands).”

Obviously, the exercises were designed to preserve the physical and spiritual body, as a means to the unlocking of the soul. 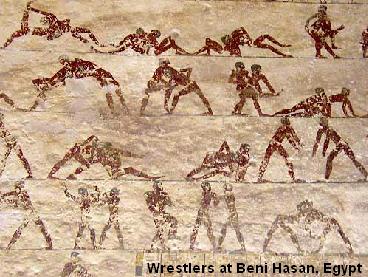 Hence it is always incorrect to interpret martial arts fighting techniques as having been designed to commit acts of naked aggression, as opposed to being employed as methods of self-defense.

The martial arts, while deadly in the hands of skilled practitioners, when practiced correctly, are done so in accordance with the philosophies of non-violence and non-aggression.

And through intense physical and mental preparedness and meditation, the unity of mind, body, spirit and soul produces a strong, focused and serene mind, and the “stillness” in movement that promotes growth and mental acuity. The arts are used in self-defense, only when necessary, thus making it extremely unwise to provoke a true practitioner.

This is a very brief look into the foundations of the gift of martial arts, given by their true originators in earliest Africa.

Photographic documentation of the African origins of martial arts can be found within Shaolin temples in the forms of statues and paintings and as hieroglyphics within paintings and stone tablets and upon the walls of Egyptian tombs.

With these firm principles in mind, I observed the Shaolin Warriors of China, as I have watched other demonstrations of Shaolin monks in other times and at other venues. Though media recording was only allowed during the pre-performance demonstration in Marin, my mind’s eye recorded the seriousness of the practitioners and the precision and crispness of very advanced techniques that could only have been performed within the context of a unity of physical will and training and of spiritual purpose.

We would all be wise to fully look beyond the merely commercial and the popular sport aspects of martial arts to their true origins and the depth of spirituality from which we may learn and grow.