At its Wednesday, Nov. 14, meeting, the San Francisco Mental Health Board welcomed public comment before voting 9 to 2 to pass its resolution against putting Conducted Energy Devices, or tasers, in the hands of San Francisco police Crisis Intervention Team (CIT) officers.

The board invited San Franciscans with family or friends touched by mental illness, cardiac problems or police brutality or who fear for vulnerable children, plus diabetes sufferers, pregnant women, thin people or at-risk elders and anyone or who has observations on the wisdom or efficacy of SFPD taser deployment to speak at public comment during this hearing.

All the resolution’s points were supported by a large group of public commenters, including Eduardo Vega, executive director of the San Francisco Mental Health Association. Commenters uniformly opposed arming Crisis Intervention Team officers with tasers, pressing the illogic of an armed police officer using a weapon to talk down a person in crisis. Some described personal experiences of police brutality against them. Bruce Allison, a veteran with post-traumatic stress disorder, said a cop threatened to beat him if he didn’t “relax.”

In July 2012, cops fatally shot Pralith Pralourng, a young man with schizophrenia, after he allegedly sliced a co-worker with a box-cutter. SFPD Chief Greg Suhr used this cop killing as a reason to reintroduce at the Aug. 1, 2012, Police Commission hearing the taser option as a supposedly “non-lethal weapon.”

In his remarks to the Mental Health Board, Commander Mikael Ali, the SFPD officer coordinating the Crisis Intervention Team Program, again seconded Chief Suhr’s use of Pralourng’s shooting as a justification for arming police with tasers, saying the victim would be alive today if cops had these weapons available. When the Idriss Stelly Foundation’s Jeremy Miller objected, reminding Ali that Pralith’s sister begged Suhr not to use his death to promote tasers, Commander Ali ordered Miller to be quiet. 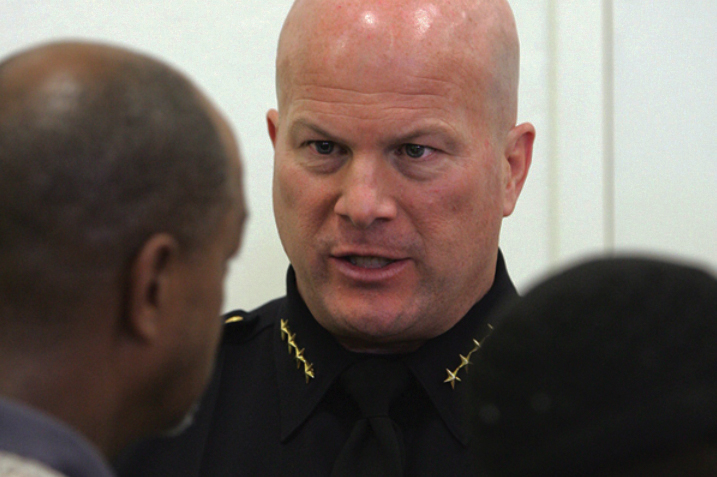 The Mental Health Board’s resolution, MHB – 2012-06, “urges the San Francisco Police Commission and the SFPD to oppose the adoption of Tasers to SFPD CIT officers.”

A key concern is that “the risk of Taser injuries and/or death is heightened for the mentally and emotionally ill who, in a crisis, may be potentially unable to connect actions to consequences and may resist police even in the face of stepped-up force.”

Marykate Connor, Caduceus Outreach Services director, observes that adrenaline surges from internal pain or fear often overpower the ability of a person in crisis to hear police commands, much less follow them. Catapulted into a flight response by terror, the person simply runs, as did Kenneth Harding Jr., who was then shot in the back and killed by Bayview police on July 16, 2011, after they demanded proof he’d paid his $2 Muni fare.

The resolution notes the association of unexplained deaths in custody of “people in states of acute agitation resulting from mental illness.”

It cites research findings that “patients taking prescribed antipsychotic medications” are “at increased risk of sudden cardiac death if tasered.”

In fact, if a taser shock interrupts a person’s heartbeat at a vulnerable point, ventricular fibrillation or heart failure can result. In 2008, Taser International, the Arizona company most favored by SFPD, paid over $5 million in punitive damages for wrongful death when a Salinas, California, man suffered fatal cardiac arrest after being tased for a prolonged 75 seconds.

Certain categories of people may be at high risk of death by taser: those whose physiology is altered by heart conditions, some medications, illegal drugs or metabolic disorders like diabetic ketoacidosis.

The Mental Health Board resolution opposes tasers because “the disproportionate use of Tasers against minorities has been well documented by the ACLU and also in a performance audit of the City of Houston in 2008 resulting in a Department of Justice Civil Rights Division investigation which sustained the findings.”

The Idriss Stelley Foundation’s Mesha Irizarry provided data on Black and Brown elders killed by tasers pulled from a list of all taser deaths in the U.S. since 2009:

And there are many more.

Tasers do cause injury and death. Andrew Washington died in the Bay Area after being tased 17 times in three minutes. Falling taser victims’ bones and teeth can shatter; some can die plunging from balconies or into water where they drown.

The Mental Health Board resolution states “the American Civil Liberties Union raised concerns about (taser) use” in 2010.

The Mental Health Board resolution supports the Memphis, Tennessee, PD’s CIT training model for de-escalation without taser use.

The board invites San Franciscans with family or friends touched by mental illness, cardiac problems or police brutality; those who fear for vulnerable children, diabetes sufferers, pregnant women, thin people or at-risk elders; and anyone who has observations on the wisdom or efficacy of SFPD taser deployment to make public comment during this hearing.