by Lisa Tiny Gray-Garcia, daughter of Dee, mama of Tiburcio

“The police have issued over 12 citations to us in this month alone, just for parking on this empty Bayview street overnight. We are not sure where else to go,” explained Janize El, a slight, weary-eyed mother of three who lives in her van with her children and parks in the Bayview Hunters Point neighborhood close to where she used to be housed.

“I lived in the same apartment for years and then they converted it to a condo and kicked us out. I tried to find another affordable place in the Bayview, but every landlord said my credit wasn’t good enough or charged so much I could never afford to pay the rent on my meager income,” Janize concluded in a tired voice. Janize is a hard-working mama, holding down two low-wage jobs, taking care of her children and now also caregiving for an elder parent while navigating the endlessly criminalizing world of houselessness. To be specific, vehicular houselessness, aka living in yo’ car.

Reporting and supporting as a revolutionary poverty journalist, I have done multiple stories on the increasing criminalization suffered by houseless peoples in the U.S. As a daughter raised in a houseless family, I was personally cited, arrested and eventually incarcerated for the act of being houseless and living in the car with my mama. 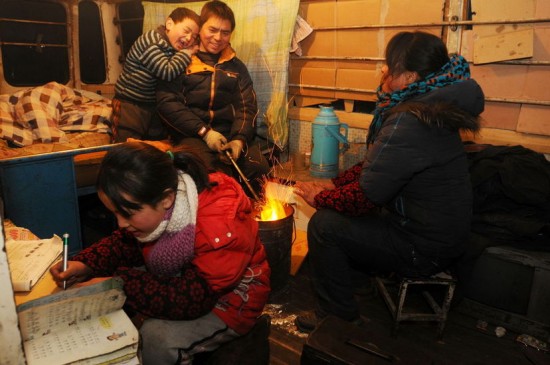 One of the main points of my book, “Criminal of Poverty; Growing Up Homeless in America,” was to raise awareness about the fact that it is illegal to be houseless in the U.S. – and that this criminality of poverty is very much race- and class-based. Cities and police forces treat new and shiny recreation vehicles – RVs – driven by elder Caucasion people markedly differently than people of color or poor whites driving older campers, vans, station wagons or straight-up broke-down hoopties like me and my mama used to sleep in.

Across the U.S., families and elders have been suffering a rise in foreclosures and evictions due to poverty and gentrification, as I reported in “From foreclosure to homelessness” in this series. Concurrently, 21st century pauper laws like sit-lie and stop and frisk have been created and just plain police harassment has been stepped up to criminalize our poor bodies of color with even greater velocity.

In Los Angeles the worst onslaught of police harassment of houseless peoples occurs in the Santa Monica-Venice Beach neighborhood, which up to the 1990s used to be a place that poor people could dwell, undisturbed, in their cars. Now with the insane rise in home prices due out of control gentrification, anyone caught sleeping or parking overnight faces fines and their vehicles, aka their homes, are being towed. 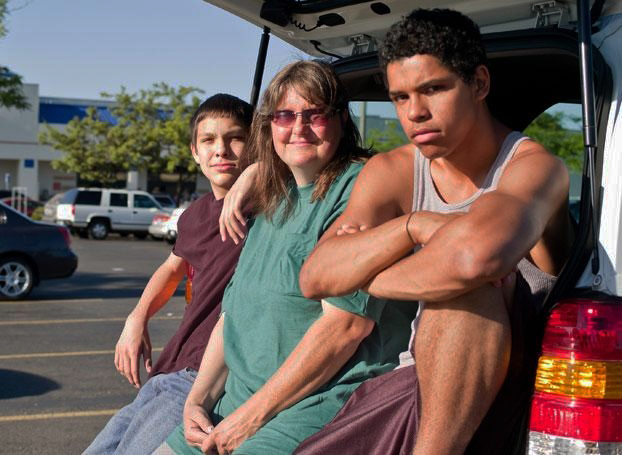 In the case of San Francisco, there has been a herstory of laws and harassment against poor people living in their cars. One last bastion of safety where poor people could park without being harassed was the Sunset District near Golden Gate Park. But recently a member of the Board of Supervisors, responding to nimbyistic residents of a neighborhood near the park crafted an ordinance specifically targeting the houseless homeowners, aka people who are sleeping in their campers, making it more illegal than it already is to sleep or park there.

“They have been citing us, ticketing us and continually harassing us for months. The intensity of their harassment rises and falls depending on what’s going on that week in the city,” Janeze told me through tears. She went on to explain that when the Giants won their second World Series, their exciting win wasn’t so exciting for houseless families trying to live under the radar in struggle. “They (police) began circling the area citing multiple times and telling us we were a blight and had to ‘move on.’”

“We used to park down near the Giants stadium until the pressure was too much,” Janize concluded. “We don’t want to live like this. It’s just that there are no places we can get into.” Janize is right. The already insane affordable housing shortage in San Francisco and the whole Bay Area has actually gotten worse. And families, children and elders are the ones who suffer the most. 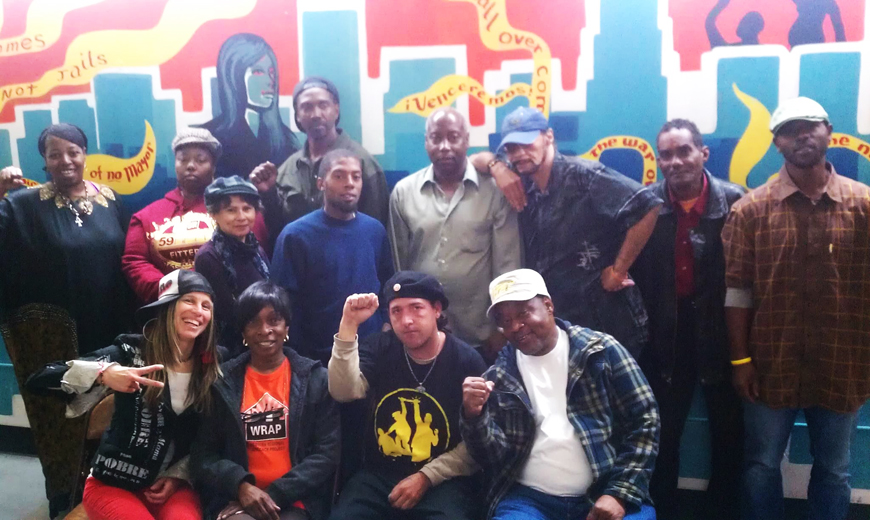 The Coalition on Homelessness, Housing Rights Committee, Homeless Action Center and Building Opportunities for Self-Sufficiency, to name a few, have been tirelessly fighting to decrease the criminalization and to increase the availability of affordable housing for poor families. As well, an affordable housing measure was passed in the recent election, which is promising, but will it really make a dent in the housing lockout of very poor families? Meanwhile the harassment continues if we are caught “homeless” in America.

“The funny thing to me is the police say they are there to ensure our safety, but since I became homeless, every time I see the police I am overcome with fear. If they tow our van, we will have nowhere to be at all,” Janize said, then paused and added, “except on the sidewalk.”

The following stories were two of several written for the Voices of Poverty Resist series in workshops led by Lisa “Tiny” Gray-Garcia. The workshops were held at LA CAN and CADRE in LA, HOMEFULNESS in Oakland and POOR Magazine in San Francisco. The series was launched by Lisa when she received the Marguerite Casey Foundation Equal Voice Journalism Fellowship Award focused on the criminalization of families and communities in poverty. Because Lisa leads with her indigenous values of inter-dependence and collaboration and has struggled with poverty and houselessness for most of her childhood with her disabled single mother of color and the grant allowed for looking at the way that language, culture and race influence public attitudes about peoples in poverty, she created this collective journalism process where all of our voices in poverty are speaking for ourselves to achieve a collective and truly inclusive challenge to the “otherizing” that usually happens by corporate and independent media producers when “covering” poverty issues or speaking for all of us poor peoples of color.

Struggles are categorized by suffering, ignoring the self,
an ignoring, a drowning.
Shifting soil beneath life’s constructs
deconstruct and I was left floating.
Feet beneath me couldn’t sustain me.
Quicksands when all you know is obliterated.
But you hold on. Reach out for the elusive vines that remain of a
structure you emerged from triumphant? Or at least with honors.
But something changed.
May have been the greed factor
outside of self in a social structure or
a delusional paradigm I no longer knew.

The day I entered a shelter I had little clue how I got there. It was a series of mishaps and false hopes as I look at it now. I worked freelance, and people stopped paying on time after my jobs were completed, until this little circus took a toll.

Coupled with bad relationships, I can’t say what event caused me to become homeless, other than a series of shady employers who took advantage of the delusions of a person who believed in principles. I still give freely and receive little in the way of financial recompense.

I have a head full of ideas that have little to do with this economic monster set up to consume everything and everyone. Ultimately whom or what can I blame but my own poor choices? What was it that I really wanted? And when did I stop believing?

Yes, we live in a white world and I’m brown. My mixed heritage café con leche would color me, but I couldn’t begin to state the many moments when my goals and dreams were hindered by external forces I felt stopped my breath when I tried to reach higher. So where do I begin?

To be homeless is a state of mind and physical being to endure the greatest violation of all human rights. Sleeping on pavements, doorways and benches are all violations of city ordinances, yet this is all that is left to you and me. To be homeless is to be a pawn for greed, as corporations gentrify whole communities from the houses of our extended community, near and far. City politicians, police and businesses have all written a ticket to pursue and to grasp power off the backs of the poor and homeless: we, the Black and Brown.

Everyone deserves a roof, a pot to pee in and a bed to sleep in. The city and state’s answer is incarceration: Labor for the state in exchange for tenancy through tax dollars. By now, everyone knows that like anything else, homelessness is a business constructed for the rich.

Living in the streets, I know that resources don’t exist because 52 percent of our budget goes to those who incarcerate and violate us to no end. I know that missions do not house, and transitional housing means a temporary stay and a return to the streets. Because of who I am, there is no employment, and they humiliate us in their justifiable way of issuing us $221 per month for six months: “a solution to all our problems.”

Because of city, county and state we now have insurmountable health issues. We have no nutrients, clothing and in other cases no care for the children. Through homelessness, we now have become soldiers on the war on poverty.

Service procedures, mentors, stats and so-called self-help programs do not at any time challenge the prevalence of homelessness. I am homeless, so I can say how to provide for those who currently find no alternative but to sleep in our parks and streets.

Everyone deserves a roof, a pot to pee in and a bed to sleep in. The city and state’s answer is incarceration: Labor for the state in exchange for tenancy through tax dollars. By now, everyone knows that like anything else, homelessness is a business constructed for the rich.

Increasing inequality is a driving force for homelessness. In California the disconnected seek and need aid. Deteriorating incomes coupled with rapidly rising rent forces low income families into the streets!

What do people of color have? Do we have more opportunities for housing, education, employment, finance, scholarship or even respect from what you say your programs offer? Your programs do not give us hope but only despair.

One of your peers just one week ago said that the poor can handle themselves because they will always have a safety net! Is this what you think of me? You who represent the state, the nation, are blowing smoke because the structure that you and this nation planted never intended us to survive in the first place.

Years ago a life in the struggle was the draft and a ticket to Vietnam. Now I come to realize, from where we sit or stand, that was just a futuristic preface of things to come as we live lives of homelessness right now.

So in conclusion, our so-called city writes our ticket, but we choose our destiny. Which is it? Homes not jails – or “not,” to say the least! Stand up and fight! And city and greed, get back!