The Marcus Garvey Building, also known as Liberty Hall, is an A-1+ rated national historic landmark that has fallen victim to the mortgage crisis and has been taken from the community through a foreclosure bulk purchase by Citi Property Holdings, Inc., a Florida-based hedge fund, along with more than 20 other properties. Citi Property Holdings, Inc., a subsidiary of the giant CitiGroup, which also owns CitiBank, refused to honor the 10-year lease held by the current lessee, Overcomers With Hope (OWH), resulting in OWH losing $170,000 worth of grant funding to repair Liberty Hall and continue to run their programs.

This national historical landmark, located at 1485 Eighth Street in West Oakland, has been servicing the community for over 100 years, operated by and for the people. Formerly Post 188 of Marcus Garvey’s Universal Negro Improvement Association (UNIA), the building was also the home to the Black Pullman Porters, Father Divine and Jubilee West, and it was the first dollar store in West Oakland.

This national historical landmark, located at 1485 Eighth Street in West Oakland, has been servicing the community for over 100 years, operated by and for the people.

Currently, it is the home of Overcomers With Hope (OWH), a non-profit organization that trains at risk youth in television and digital arts media production, Jack London Square Church of God in Christ, the West Oakland Community Information and Resource Center and the new headquarters for Pitch Mixer Entrepreneur Forum and Intuitive Interactive outreach programs for developing STEM and entrepreneurial skills in this underserved community.

Overcomers With Hope, founded by Bishop J. E. Watkins, a 2010 Jefferson awardee recognized for his work in providing outreach to at risk youth, also uses the building as a community center that makes referrals for jobs and training, food, utilities restoration, housing search and financial assistance. 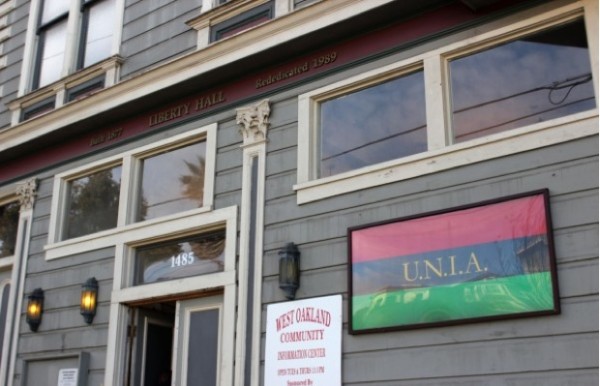 Citi Property Holdings is demanding that Overcomers With Hope vacate the premises and find a new home by Feb. 2, 2013, for over $1 million worth of donated media equipment, and find a new place to render services to the community, putting their constituents in West Oakland at further risk.

The community has organized and participated in town hall meetings to save this Marcus Garvey building, Liberty Hall, to keep this historic building and the services it provides alive in West Oakland. Overcomers With Hope made a fair offer to purchase the property based on the current condition of the building and were denied by Citi Property Holdings. They have also put together 30-, 60- and 90-day plans that include upgrading the building with seismic retrofitting, installation of solar panels to provide electricity, and a ramp up of the information center that will help give this underserved community access to job information towards the 5,000 new positions that will be made available through the redevelopment of the Oakland Army Base.

Join the fight to keep Liberty Hall, the Marcus Garvey Building, in the hands of the West Oakland community that it has cared for, loved and served for more than 100 years.

We are looking for supporters in the area of community, media and press outreach as well as finance and fundraising support to help us meet our aggressive goals to save this building. If you can help in any of these areas, we need you there. If you are not sure how you can help but want to help anyway, we will train you.

See you there! Together we can save the Marcus Garvey Building and #SaveLibertyHall!

Deadline to save the Marcus Garvey Building: Feb. 2, the start of Black History Month

Interview with Will Hammons by People’s Minister of Information JR Valrey, broadcast on the Block Report Dec. 19, 8 a.m., on KPFA 94.1FM

M.O.I. JR: Our next guest is fellow broadcaster and one of my colleagues, Mr. Will Hammons. He is a broadcaster at KPOO, one of the sister stations of KPFA. But right now I am talking to him about one of his programs that is held at the Marcus Garvey Building in West Oakland. Can you tell us a little bit about what it is that you do in the Marcus Garvey Building in West Oakland?

Will Hammons: Sure, JR. Thank you for having me on this morning. It’s always a pleasure to hang out with you and I enjoyed the Black Media Awards a couple of weeks ago. It was real nice.

I’m the executive director for Overcomers With Hope, which is a digital training program for at-risk youth in Oakland. We’ve been there for probably three and a half years or better, and we have a complete television studio in there and we train young people how to operate the equipment, how to produce programming, how to be young upstanding adults, to respect themselves and all that goes along with the cycle of life learning that a lot of them are not getting exposed to.

Within our program, you’re getting into areas of life and interviewing doctors, lawyers, police or whomever is necessary to get information. We’re the only youth organization that’s been contacted by the Oprah Winfrey Show to get some exposure, so we’re quite proud of that.

M.O.I. JR: This show is very much in the legacy of Marcus Garvey, who you know was a revolutionary as well as an economic pioneer in our community, and he was also a journalist. He had a newspaper called The Negro World, which actually reached over 1 million people. He had four different languages featured in the newspaper.

What is the history of Liberty Hall, the building in which you are housed as a program? What is its history and what is its relationship to the late great Marcus Garvey?

Will Hammons: Well, the building, as I said, is more than 140 years old, one of the oldest buildings in Oakland. It’s a national landmark with an A1+ rating, which is the equivalent of the White House and the Washington Monument and other buildings of such stature, so it’s highly valuable in terms of historic value.

In the early 1920s, Marcus Garvey purchased the building and opened Post 188 of the Universal Negro Improvement Association, and they were there for several years before they moved on. After Marcus Garvey and his organization had it, Father Divine had it and his peace movement was operating out of that headquarters.

Then years later Jubilee West came in and operated several programs. Then, Ayinde re-invented, if you will, the UNIA as the Universal Neighborhood Improvement Association, and they continued to carry on services for the community, youth programs, programs for the previously incarcerated.

Folks in the community have been served in so many areas, and it’s been that way for more than 100 years. Our organization came in there in about 2009. I started there working with the young folk, and we started producing television programming and radio programming since that particular time.

So again it’s always been a community building and it lapsed into foreclosure and was scooped up amongst 24 other properties by Citi Property Holdings, which is a subsidiary of CitiBank, and they have no affinity to the community whatsoever. They just want to sell it to the highest bidder.

Our claim is that we want them to give it to us and give it back to the hands of the people. We don’t want to pay a dime for it.

M.O.I. JR: How can they do that if it was a historic site?

Will Hammons: Well, historic properties can be owned by private parties. It’s just you have a limit to what you can do based on the fact that it’s a national historic landmark so you have to go to the National Historic Registry and notify them of any changes you want to make. It’s a big convoluted process to do anything with that building. See you can’t come in there and change walls or anything like you would your regular home. 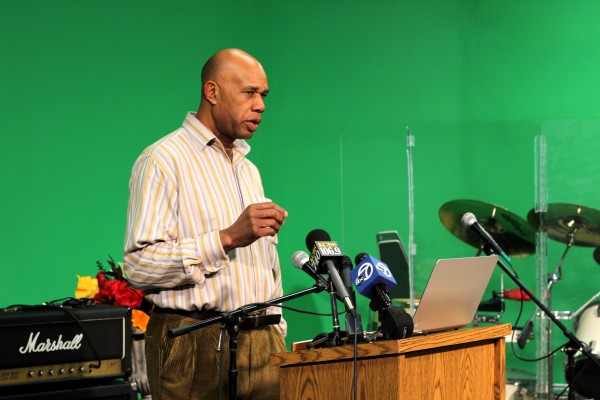 But they (Citi Property Holdings) don’t care about that. Obviously, their portfolio is quite large in terms of properties and buildings. Our request is that they turn over the building and give it to us, we don’t want to pay anything for it. We were entitled to reparations at the end of slavery and we still haven’t received our 40 acres and a mule and we’re claiming this as a part of the 40 acres and a mule payoff, so that’s it and that’s all.

M.O.I. JR: So what is it that the community can do to support you?

Will Hammons: Well, we have a petition. You can go on our Facebook page, Save the Marcus Garvey Building. SaveLibertyHall on Twitter as well. Join our campaign. We’ll be delivering additional information on Saturday at 4 p.m. at a town hall meeting – we’ve been doing that for the past few weeks – at 1485 Eighth St., right at the corner of Chester; that’s one block from the West Oakland BART Station.

We’re asking for folks to come and join us, and we’re going to continue to put pressure on the powers that be to give up the building, give us the deed, turn it over to us and go on about your business in a friendly way or else we’re going to raise quite an issue about it. In particular, they’re going to empty the building, leave it to anybody to do anything. They’ve already let it go into disarray: The roof is leaking.

If we hadn’t been in that building, we don’t know how damaged it may have become. In fact, we were awarded $170,000 worth of repair money to fix the building, but the people who owned it refused to sign the document and thus we lost $170,000, which we would have put into repairs on the building. They worried about paying it back – nobody had to pay it back – and yet they stood back and did nothing and we ended up losing $170,000 to repair that historic building.

M.O.I. JR: Well, we’re running out of time, Mr. Will Hammons. When can people catch you on the air every week?