Davis countered, “Had the department moved more quickly to implement CIT training [in talking down the person in crisis rather than shooting him], the incident … this summer may well have been avoided.”

Supervisor Avalos noted Davis’ contention that, once CIT officers get tasers, they proliferate through jurisdictions. No-taser activists speculate SFPD’S plans for Crisis Intervention Team tasers for the mentally ill is a pretext to arm the whole department.

In an interview, Davis stated, “We think [Pralourng’s shooting] was a tragic incident for them,” but “that catches the attention of the City.

“I think they are looking for an easy fix to problems that are very complex,” requiring “a complex and committed institutional response.”

Alatorre introduced well-coordinated public commenters highlighting national and state “lawsuits and respected studies” exposing the “harms of trigger-happy police officers who rely on excessive force instead of decent, culturally-competent de-escalation tactics that could have saved lives.”

Public commenters proceeded one by one to address the five central issues raised in the letter: costs, injury and death risks, disproportionate impacts on mentally ill people and people of color, and police misuse and abuse.

In its letter, praised by Avalos as “well-documented” – with 72 citations – the ACLU reminded Suhr that, on Feb. 23, 2011, the Police Commission passed a resolution giving the department 90 days to finalize a less lethal weapon study, including implementation costs, and requiring SFPD to consult with communities of color, mental health professionals, LGBT and community groups.

“Unless and until the department fulfills this obligation,” the letter insists, “it is premature to consider a pilot program for tasers.”

Public commenter, Lydia Heather Blumberg, noted, “Tasers only have a useful life of five years or so, after which they need to be scrapped,” and each patrol car’s external automated defibrillator, required for heart stoppage, “costs twice the money of the tasers.”

“Lawsuits will happen!” attested Jeremy Miller. “In Portland, just a few weeks ago a settlement was reached after a September Department of Justice decision against Portland police for the misuse of tasers, specifically against people with mental health issues. The plea bargain will cost $3.5 million to $5.4 million annually.”

Davis addressed soft costs. “I have no doubt that some of the populations here … disproportionately impacted would probably have a problem and file suit,” Davis said.

Risk of death and serious injury

“Tasers are as lethal as any gun,” asserted Drug Users Union’s Gerald West.

Miller reported his research unearthed a higher death count than the ACLU’s 500: “755 people dead in the United States since 1983, 170 in California.”

Miller reported, “In 2010, the United Nation’s Committee on Torture declared tasers, including the X26, a legitimate torture weapon.”

Coalition on Homelessness Executive Director Jennifer Friedenbach said visualizing the SFPD “inserting probes into the muscles of people experiencing psychiatric crisis and shooting them with 50,000 volts of electricity at 3 amps” makes her “sick!”

Growing numbers of anti-taser protestors throng public comment at hearings agreeing with the ACLU that the most pressing reason to block conductive energy device use is their serious fatality risk to agitated people with mental illness.

The ACLU letter underscores Miller’s testimony that “approximately 20 percent of taser-related deaths in the U.S. are through mental health conditions.”

In an interview, Davis emphasized the ACLU’s study documented “massive numbers” of SFPD encounters with mentally ill San Franciscans, “something very unique to this City.

Though people may not know that tasers pose fatality risks to multiple groups – people on drugs or medications, those with diabetes or cardiac problems, epilepsy and autism sufferers, pregnant women and small body mass humans, such as thin people, children and elders – the other biggest danger is to people with disabilities.

Describing her 2004 “experimental” tasering, Mesha Irizarry raised her cane as “my living proof of the long-term damage of tasering to my sciatic nerve and the conjunctive tissue between the femur and the pelvic bone.”

Tammy Alpers was tearful. If her autistic child “had an altercation with the police, he would not know what was going on. I’m sure he would be tased.”

Benefits of de-escalation and CIT

Hospitality House’ Joe Wilson addressed SFPD “having another tool in our toolkit. A sledge hammer is a tool, but the heart is also a tool. People in crisis need an appeal to the heart. The easy thing is to react and reach for a tool when you are actually ignoring what you already have – eye contact, the tone of your voice, the power of human touch.”

Rev. Glenda Hope, Tenderloin Network Ministries, has “dealt with many people in crisis on the street, in our several facilities and our safe house for homeless addicted, prostituted women trying to change their lives.”

Hope described successful de-escalations of a client twice her size who “suffered ritual abuse and pimping by her parents from an early age.”

“I’ve had to interpose my tiny body between her and others more than once. Always we’ve been able to bring her down.”

“If SFPD has made CIT a priority, why doesn’t 911 know what the heck I’m talking about when I ask for a CIT-trained officer?” asked Blumberg. “Why doesn’t the beat cop on my street know anything about the program?”

For years, Friedenbach has seen no funding and little development or implementation of SFPD’s “team response to people experiencing psychiatric crisis,” including,

She insisted a team development program costs a pittance compared to tasers, cartridges and defibrillators. 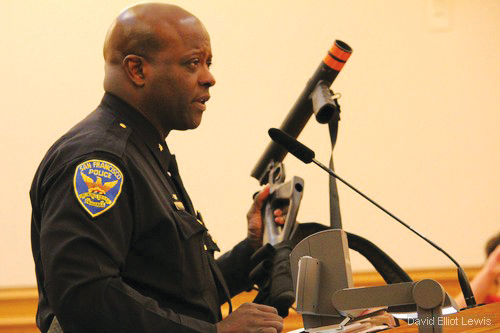 Mental Health Association Deputy Director Michael Gause, who opposes tasers, volunteers with mental health professional groups developing unfunded trainings. “We’ve had three trainings in CIT so far,” he said. “It is not yet a team.”

Disproportionate impact on people of color

Miller’s insistence that “the police assassination of Idriss Stelley, Vinh Bui and Pralith Pralourng were nothing other than [SFPD] assassinations” suggests why roughly 30 percent of protestors are people of color: 20 percent Latino and 10 percent Black.

Irizarry agrees with Miller, however, that “in California, the largest group targeted – victims of taser-related deaths at 245 percent – are Latinos or Hispanics.”

The ACLU letter documents that police taser overuse and abuse nationally “has disproportionately impacted African-American communities over others, a worrisome trend SFPD cannot afford to replicate.”

Risk of overuse and abuse by police

Mental Health Board Secretary David Elliott Lewis helped draft the no-taser resolution. Olague encouraged Elliott’s concerns that, though CIT officers should be trained to use verbal de-escalation techniques to defuse stressful mental health crisis encounters, they may be tempted to circumvent talking someone down with a quick taser button click.

Davis especially stressed the letter’s warning that “most deaths associated with [Taser] use involve multiple or prolonged discharges.”

Friedenbach cautioned, “Independent studies not funded by people profiting off these weapons” show “that fatal shootings by the police more than doubled in the first year after the police departments got tasers.” She stressed that, as interest in the new toy leveled out, shooting numbers did not decrease.

The ACLU letter advises SFPD to “weigh the [limited] benefits of Tasers against both hard and soft costs, which include high probability of increased misuse against those with mental illnesses and people of color.”

“SFPD should encourage its officers to use weapons it already employs … especially including de-escalation tactics, to address situations in which either the officer or suspect may be in harm’s way.”