Robert Allen Saulson of San Francisco passed away quietly in his home due to complications of liver cancer. He spent his final days on earth surrounded by loved ones and died in the arms of his only son, Scott Saulson, on the night of Thursday, Jan. 3, 2013. Robert was 70 years of age at the time of his death. 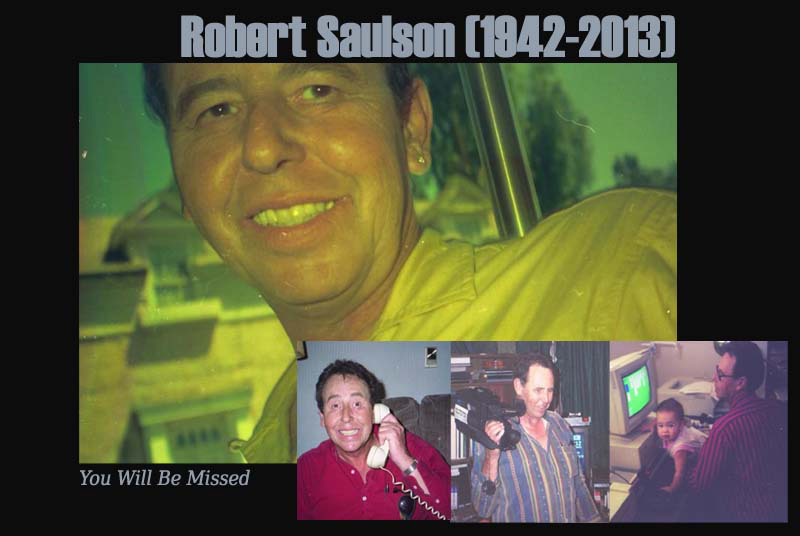 Many community members in the Fillmore, Bayview and Tenderloin knew Bob from his volunteer work as a camera man with Iconoclast Productions for nearly 20 years, during which time he videotaped many local community, music, political and church events. Although most people recognized him best when he was holding a camera, many didn’t see him behind the scenes, fixing equipment and supplying other technical services for the organization and other non-profits it served.

Born in Chicago on July 2, 1942, Robert was the second oldest and last surviving child of Ruth Lucille Ward nee Saulson. His father, Roy St. John, was an identical twin who met his mother in vaudeville. The couple retired from show business within a year of his birth when his older brother, Donald, turned 5 and started his schooling.

After the St. Johns divorced, Ruth remarried and had two more children: Robert’s younger brother, James, and sister, Charlene. All four of the children took Ruth’s maiden name, Saulson, and grew up first in Florida, then California, and graduated from Venice Beach High School in Southern California.

A retired telecommunication systems technician, Robert, who was known to most of his friends as Bob, was a U.S. Navy veteran who served as a radio technician while stationed in Keflavik, Iceland. He was also stationed at Treasure Island while it was still an active base. He served in the Navy from 1960 to 1964. He met his wife at Harbor Community College in Wilmington, California. They married in 1967, and divorced in 1974. The Saulsons had two children: daughter Sumiko Saulson and son Scott Saulson.

The Saulson family needs your help

In the nearly 20 years Robert Saulson was a volunteer for Iconoclast Productions (www.iconoclastproductions.org), you probably saw him with a camera in his hand as he videotaped for public access shows “Stagefright” and “Greater Faith” and for BAPAC or worked behind the scenes with audio and video production equipment for various community functions around town.

He was a U.S. Navy veteran and as such the Veteran’s Administration is providing a plot and a headstone and internment services, but the family needs to raise money for other expenses related to his funeral and memorial services in advance. Can you help?