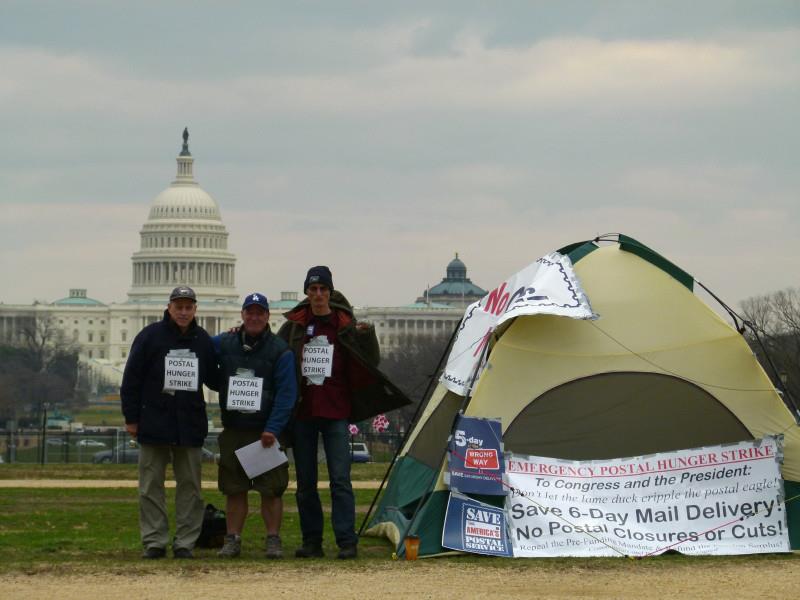 A half dozen postal hunger strikers completed a six-day fast for six-day delivery and declared a “people’s victory” in late December. The strikers established an “emergency” tent encampment in the shadow of the Capitol, demanding that Congress and the president halt closures and cuts to the U.S. Postal Service.

They set up their tent on the National Mall after outgoing Sen. Joe Lieberman announced that he and California Rep. Darrell Issa would hold “secret” postal reform talks in December to eliminate six-day delivery of the mail. Lieberman and Issa proposed taking advantage of the “lame duck” session of Congress to do away with Saturday delivery, reportedly by attaching it to a budget bill.

Hunger striker Jamie Partridge, a retired Oregon mail carrier, said: “Along with thousands of postal workers and community allies who are battling to save America’s postal service, we were able to raise awareness and increase pressure on the decision-makers as they attempted to wrangle back-room deals.” Though the Lieberman-Issa scheme did not succeed this time, the threat to axe six-day mail service remains a live one in 2013.

The hunger strikers, members of a national network called Communities and Postal Workers United (CPWU), used their week in the nation’s capital to do the following:

Last June, 10 CPWU activists staged an earlier hunger strike in Washington, D.C., declaring that Congress was starving the postal service – and broke into the national media big-time. They said that a 2006 congressional mandate, forcing the USPS to pre-fund retiree health benefits 75 years in advance, is bankrupting the service. The Postal Regulatory Commission released a report in November stating that not only would the postal service have been profitable without the mandate, the USPS has also overpaid tens of billions into two pension funds.

“Not the internet, not private competition, not labor costs, not the recession – Congress is responsible for the postal mess,” said Kevin Cole, a returned hunger striker and postal maintenance worker from California. “Corporate interests, working through their friends in Congress and the presidency, want to undermine the USPS, bust the unions, then privatize it.”

A half dozen postal hunger strikers completed a six-day fast for six-day delivery demanding that Congress and the president halt closures and cuts to the U.S. Postal Service.

Postal unions are calling on the postmaster general to suspend cuts and closures and allow Congress to fix the finances by repealing the pre-funding mandate and refunding the pension surplus.

And in this time of high unemployment, why the rush to eliminate livable-wage postal jobs? As Victoria Panell of New York, youth leader of the National Action Network, told the first group of postal hunger strikers in Washington, D.C., last June: “Take away a parent’s job, take away a child’s future.” Victoria Panell is a member of Community Labor United for Postal Jobs and Services, a CPWU affiliate in New York City.

Dave Welsh, a retired letter carrier and delegate to the San Francisco Labor Council, is an organizer with the Community-Labor Coalition to Save the People’s Post Office. He can be reached at sub@sonic.net.