I was at Oakland City Hall until almost 3 a.m. on Wednesday morning, Jan. 23, 2013, until the City Council voted 7-1 to hire global “Super-Cop” William Bratton as a consultant to solve its soaring homicide and violent crime rates. Only District 6 City Councilwoman Desley Brooks dissented.

I wasn’t among the hundreds who spoke, because I ceded my time to West Oakland Bikes4Life bike shop owner and community builder Tony Coleman after the Council cut speaking time to one minute because of the crowd.

This is what I would have said if I’d had my own two minutes and what I’d still like to say, here in the Bay View:

My name is Ann Garrison. I’m a journalist and I live in West Oakland’s District 3.

According to Businessweek, William Bratton, in 2009, became chairman of Altegrity Risk International, a new division of Altegrity, a billion dollar company owned by the private equity firm Providence Equity Partners.

Altegrity Risk International was created to bid on highly lucrative State Department contracts to help train police forces in 14 “post-conflict” nations, including East Timor, Haiti and Afghanistan. Obviously U.S. taxpayers should not be paying to create and manipulate conflicts all over the planet and then to train “post-conflict police forces,” but William Bratton likened this to “the Peace Corps but better paying.” 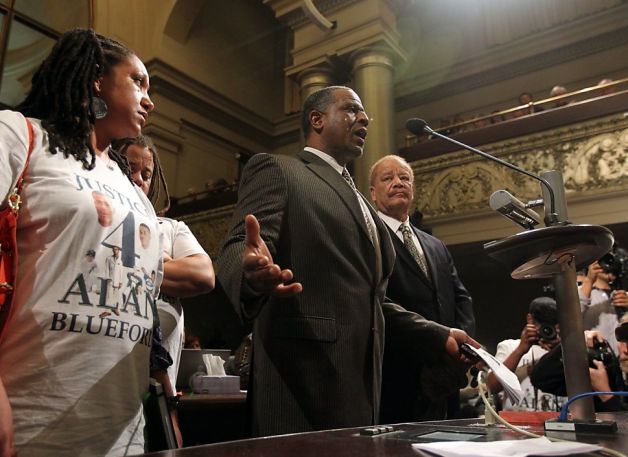 Bratton went on to become the CEO of Kroll Associates, a similar business since acquired by Altegrity. He later stepped down as Kroll’s CEO but was retained as its senior advisor. He also serves as vice chair of the Advisory Council of the Homeland Security Department.

I hate to see Oakland become a market for this or any police mercenary corporation, whether traded on Wall Street or otherwise privately held.

And I think all of you know that the Bratton contract is a gimmick that might generate short term political capital but that it’s not going to work.

The City of Oakland doesn’t have the resources to do everything that needs done about the poverty, unemployment and despair that cause violent street crime, but that’s all the more reason not to throw another quarter million dollars away on a gimmick.

Oakland should turn instead to its own Bay Area neighbors in Richmond to see what they’re doing right and why their homicide and violent crime rates have so radically dropped. I imagine that Richmond’s crime fighting team would consult with Oakland’s at little or no cost, considering the mutual benefit of reducing crime in the San Francisco Bay Area.