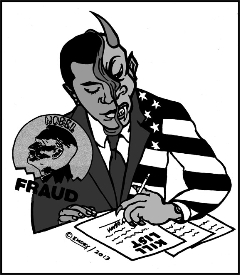 There’s a lot of talk about President Obama and his use of drones as well as his kill list, asserting he can kill American citizens he deems to be working against America and somehow down with al-Qaeda. This is indeed very scary and something all of us should seriously reflect on, because whatever steps Obama takes will not be limited to him. Whoever sits in the Oval Office next will be able to pick up where Obama leaves off.

Seems like quite a few are giving the President a pass on his policies. Would we be comfortable with those policies if we had President Romney as opposed to Obama? What if it was former President George Bush saying he has a kill list and has a right to list American citizens? Many of us took to the streets and raised a ruckus for far less.

Thursday in Washington, there were confirmation hearings for John Brennan, who is said to be the brains behind Obama’s insidious drone policy. Brennan is shooting to be director of the CIA. Are people really comfortable with his policies?

Are we comfortable with the U.S. setting up drone bases in Niger, knowing that during the Bush administration Bush had Colin Powell lie before the United Nations about that African country providing uranium for terrorists? His testimony was briefly interrupted by folks upset with the drone policies he later defended.

Are we comfortable with Obama having a secret drone base in Saudi Arabia and mainstream news outlets like the Washington Post agreeing not to report this to the American people?

I want people to be aware of a tactic that is being used in support of White House policies around the discussion on drones. There is a set of talking points and particular phrasing being used by stealth surrogates and “supporters” of the President designed to frame the conversation in a way that moves one away from talk about diplomacy and de-escalation and into the arena of “we all must fight terrorism at every opportunity.”

Inevitably someone will try to put the onus on you for objecting. Pay close attention when someone responds or inserts themselves into a conversation and asks questions or makes statements along these lines:

1) If we don’t use drones, what better ideas do you have to eliminate top terror operatives? Instead of complaining about the president fighting the war on terror, perhaps you should help him. This is difficult work.

2) Troops on the ground are not as effective. Drones are the only way to fight back. Do you have another way for us to take out top terrorists without troops? 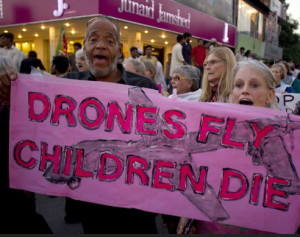 3) There are bigger threats that you can’t see. Bush started something that Obama unfortunately must finish to protect us all. It took us over a decade to find Bin Laden.

4) Those so-called innocents who have been killed by drones hide or aid terrorists. The terrorists use kids to fight us and then claim innocence. We haven’t killed that many innocent people. They killed innocent people during 9-11. Our drones are doing the job of fighting terror more effectively.

5) The terrorists plan there and then come here or against our interests around the world. They started it: Remember 9-11. It’s better for us to fight them over there than at home.

6) We must use drones because we have no other options. Our allies like Pakistan hid Osama for years and lied to us.

7) Diplomacy doesn’t work. They want to kill us. They have an advantage on their land. They know it better than anyone. I don’t condone killing innocent people, but we must use drones to level the playing field. They must be stopped!

Basically the tactic used is to situate the discussion as if we have no other choice but to fight the war on terror. It’s designed to make you forget that the war on terror was a manufactured war with the goal of keeping it open-ended and perpetual so we could expand it as necessary.

Obama is depicted as a reluctant participant who would rather have peace but is “forced to clean up the mess” that George Bush started. 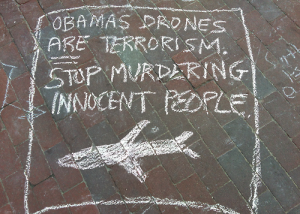 There are Black and Brown faces increasingly being used to push these arguments. Some are literally paid pundits and operatives. Others in a misguided sense of Black pride and unity have sold their souls and turned a blind eye to actions and policies that they know are dead wrong. Others who once upon a time were excluded have been made to feel “special” because they were put on some sort of White House mailing list, got a phone call from someone important asking for their help or been invited to informal White House briefings.

The end result is a misguided sense of loyalty at all costs. As fellow journalist JR Valrey of the Block Report once famously noted, many are not interested in justice or preserving life. They just want their turn to hold and crack the whip.

Bottom line: Be wary of the attempts to get folks to buy into a concept that we once railed against called “preemptive strikes.” When Bush kicked this off, we hit the streets by the thousands.

Obama doesn’t use that term, instead he invokes the image of us being in a life and death struggle against “evil terrorists.” As a result, many have checked their conscience at the door to pick up a sword to join in saber rattling, while simultaneously bemoaning the fact that youth in our community have turned to violence as a solution to problems vs. de-escalation and diplomacy.