Urgent! SFUSD is making a shocking move: They plan to ask the School Board at the meeting Tuesday, Feb. 12, 6 p.m., at 555 Franklin, First Floor, to AWARD THE $44.6 MILLION CONTRACT FOR WILLIE BROWN SCHOOL TO A MAJOR WHITE CONTRACTOR without competitive bidding. We must convince the School Board members to vote NO! Pack the meeting! Protest economic racism!

It has been five short months since dozens of unemployed Black workers and contractors organized a major protest at the site of a $40 million proposed rebuild of Bayview’s Willie Brown Middle School. At the time, the San Francisco Unified School District was considering whether or not to require local hiring and contracting on the project before it goes out to bid this year. The community’s action at Willie Brown sent a clear signal of high expectations for Black participation on the project and made it clear that a “good faith efforts” approach is not an option for the district.

In the months that followed, members of the San Francisco School Board held hearings on the importance of local hiring and contracting policies such as those in place for public works construction funded by the City and County of San Francisco as the district embarks on a plan to spend a voter-approved $531 million bond to improve school facilities throughout the city. Commissioners Norman Yee and Sandra Lee Fewer even introduced a community and labor-backed resolution in December to develop these policies and develop a process to negotiate directly with Black contractors to ensure opportunities for business owners and workers of color.

Our Black builders coalition, Rising Sun Developers, came together to engage the district and show the decades of experience among our members make us fully capable of building Willie Brown Middle School on time and on budget with over 50 percent local hire while working with the local building trade unions.

As of today, however, the San Francisco Unified School District has refused to guarantee opportunities for local residents, particularly for Blacks in Bayview Hunters Point, on Willie Brown or any other school district construction. The deadlock came to a head at the Jan. 29 School Board meeting, as heart wrenching testimony from a young Black man who lives near the Willie Brown campus told of his despair, sadness and anger at being denied access to a job at a school in his own neighborhood. He told of his struggle to support his daughter financially and the tragedy of losing his young son to gun violence, all the while seeing the decline of his community during an economic boom period in San Francisco. His five minutes of impassioned testimony prompted the School Board to recess in order to regroup before continuing its regular order of business. 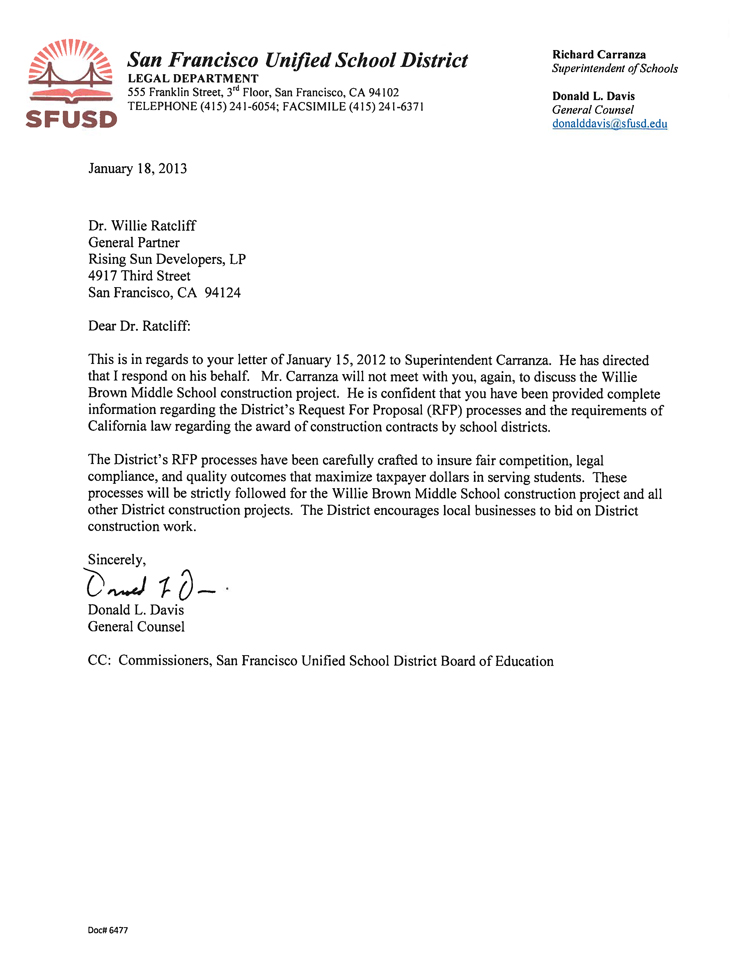 Despite support from the School Board and School Superintendent Richard Carranza to move local hiring and contracting beyond “good faith,” Chief Facilities Officer David Goldin has stalled every action to establish new policies for School Board construction by insisting that “it would take too long” to develop such language. Instead, Goldin has insisted on the usage of a “good faith” project labor agreement that he negotiated with San Francisco Building Trades Council Michael Theriault, who himself has been widely criticized by African American leaders for his opposition to local hire and derogatory statements about Blacks, back in 2008.

Sources have even indicated that Goldin has privately sought to poison School Board members and SFUSD staff by suggesting that community members who joined Bayview-based Aboriginal Blackman United for the Willie Brown Middle School protest last August “threatened people with bats and guns.”

The 14th Amendment on contracts supersedes state law, which Mr. Goldin has stated prohibits local hiring and contracting requirements on their projects. If the Board of Education cannot stand up and meet our request to stop the lockout of Blacks from school construction, we are prepared to use all legal means to block any bond funds from being used by the district unless it guarantees opportunities for public school graduates and their families and will shut down any construction site that attempts to placate the good ol’ boys club by requiring nothing but “good faith efforts” to hire Black contractors and workers. “Good faith efforts” mean we continue to be locked out as we have been for generations. 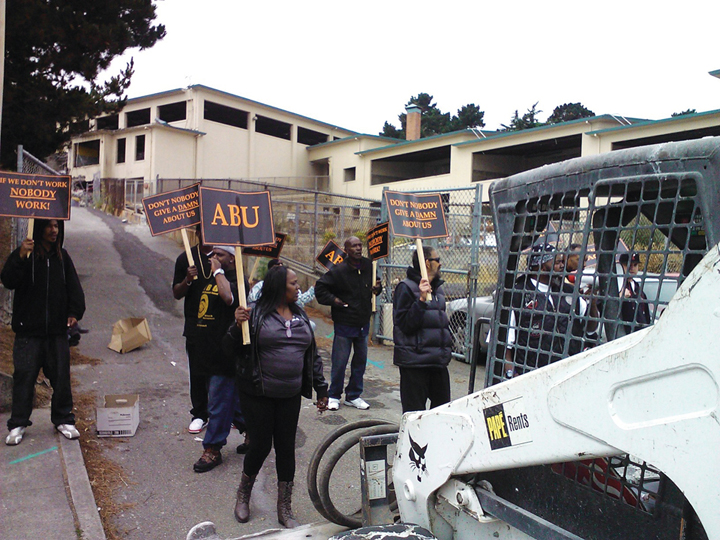 We refuse to let the School District devastate the lives of our children and families by discriminating against Rising Sun’s demand for jobs for the community’s workers and contractors. Rising Sun Developers, a limited partnership of contractors and workers in which my firm Liberty Builders is a general partner, will lead the development of the Willie Brown Middle School and other projects in the community. We need the community to come together and demand that projects in our community are developed by Black developers so they control who gets the jobs that can turn our community from devastation to peace and prosperity.

Time has nearly expired to avoid future community unrest at being shut out of the opportunity for our community to rebuild our institutions of public learning. Community members have asked School District policy makers, “How can you ask us to believe in our schools again if you won’t give us a chance to build them from the ground up?”

Scores of public school graduates in Bayview Hunters Point and nearby neighborhoods have participated in training programs designed for success in construction, and many have already joined local construction trade unions. Southeast San Francisco is rife with local contractors who are eager to have a leg up to continue their career in the business side of construction by revitalizing the dwindling minority contractor base in San Francisco. 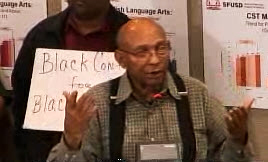 “For nearly 30 years, ABU has fought for opportunities for Blacks on local construction jobs and inclusion in the local building trade unions. I am a member of the Electricians Union, have performed construction as a worker and a contractor my entire adult life, and know firsthand what good-paying union construction jobs can do to support families and rebuild communities.

“The City made a promise to our community 40 years ago: When the Hunters Point Shipyard was phased out, all of the talented Black workers that built weapons of war for this country would have the opportunity to instead build San Francisco and ensure that the southeast sector’s strong Black middle class would not go into decline.

“But that promise was based on the ‘good faith efforts’ of the Building Trades Council and Contractors Association. As a result, our community has been forced to fight for every job that we receive. On projects such as the Third Street Rail, we literally had to shut down work in order to get Blacks onto the jobsite.

“Forty years later we fought for mandatory local hiring on City-funded construction and we will do the same at San Francisco Unified School District. This is a call for the community to come together around this issue, to unify, and to fight this fight together.”

The community is mobilizing. Every Wesnesday, the Black Human Rights Leadership Council meetings are drawing larger and larger crowds. Everyone who’s sick and tired of being denied the human right to earn a legal living is welcome. Meetings are at noon in the Alex Pitcher Community Room on the lower level of the City College Southeast Campus at 1800 Oakdale in Bayview Hunters Point. 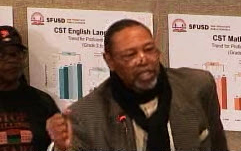 The School Board will take up the issue again this month, and community leaders have encouraged maximum participation by families of public school students, workers seeking to get a foothold into the construction industry, participants in SFUSD’s vocational skills program at John O’Connell High School, contractors seeking to work on projects funded by the school bond they voted for, and those seeking to position local trade unions as the district’s lead partner for local hiring and contracting.

The stakes are a reinvigorated belief in the importance of our public schools to change lives and the power of jobs to stop bullets that have tragically taken far too many lives from our communities. Our hunger for justice and equity cannot be denied.

There is a high rate of violence in our community – violence against each other and violence and murder by those who are supposed to protect us. This suffering in our community is caused by discrimination in the distribution of our tax dollars. The exclusion of our Black businesses that prevents them from hiring Black people is the primary cause of our young people’s despair and the resulting high dropout rates in our school system and violence on our streets. Only Black businesses can stop the lockout of our people from the economy by hiring Black workers, but they can’t survive if they too are locked out by racism.

We are the only ones who can stop what’s happening to the Black community and other people of color. We have to use our own resources to demand our fair share of tax funds.

Liberty Builders has set up a legal defense fund. We are requesting contributions from $1 up to finance our demands to benefit from our tax dollars. We need support from everybody. You can skip that bag of chips or that movie to contribute to your future.

Send donations to Liberty Builders, 4917 Third St., San Francisco CA 94124. Make checks payable to Liberty Builders Legal Defense Fund. We all need to get involved, economically and politically. The whole community will benefit from jobs created and controlled by local developers and contractors. 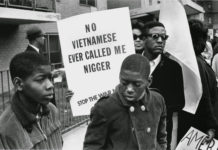