Grahamstown Unemployed People’s Union spokesperson Ayanda Kota had much more to say about this tragedy and its post-apartheid South African context than we were able to report on the KPFA Evening News on Sunday, March 3, 2013.

He said that the Black Consciousness Movement founded by Steve Biko, with his call for the restoration of humanity shattered by apartheid, offers the best hope of healing. He also said that restoration would come from below, from those still experiencing the pain in their communities, not from the wealthy political elites, both Black and white, now sheltering in suburbs and behind gates. We didn’t have time to include that in KPFA’s broadcast news transcribed and audio archived here, so I’m adding it, albeit briefly for now. 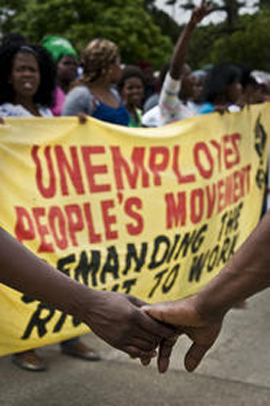 No image of Thandiswa Qubuda has been shared with the press. A memorial service for her will be held in Grahamstown on Thursday, March 7.

The only other report of Thandiswa’s death that was visible on the web as of March 4 was Mandy Dewall’s in South Africa’s The Daily Maverick: “Thandiswa Qubuda – another dead brick in the wall of rape imprisoning South Africa.”

De Wall also quoted Ayanda Kota: “Thandiswa Qubuda’s passing is horrifying. She met her death in the most savage and brutal way. If Thandiswa were from a wealthy family, her story would have been in all the newspapers, the police would have rounded up the perpetrators and they would be in jail. But because she is unemployed, she is the wretched of the earth. She does not appear in the headlines and her rapists walk free.”

KPFA Evening News Anchor Anthony Fest: Turning now to news from South Africa, Thandiswa Qubuda died in a Grahamstown, South Africa, hospital on Thursday night of injuries sustained six weeks earlier in a brutal gang rape. The South African Unemployed People’s Movement of Grahamstown said that it took the police three hours to arrive at the scene of the crime after it was reported, even though there is a police station only about a half mile away.

The Unemployed People’s Movement also issued a release saying that poor people in South Africa cannot expect protection, only violence and oppression, from the South African police. Earlier in the week in Johannesburg, in a notorious case around the world, police tied a Mozambican cab driver to the back of a police van and dragged him along the ground, then left him to die of his injuries. KPFA’s Ann Garrison spoke to Unemployed People’s Movement spokesman Ayanda Kota and filed this report.

KPFA/Ann Garrison: Ayanda Kota summarized what is known of Thandisa’s case by phone from Grahamstown for KPFA. On Jan. 19, he said, she was dragged into a yard in Grahamstown, where she was publicly beaten and gang raped. One of the key witnesses testified that the gang rapists had called him and said that he must also rape her, but that he refused, ran away and called neighbors, who rushed to the scene.

By the time the neighbors got there, the perpetrators had run away and Thandiswa lay on her back, unconscious and half naked in pouring rain, with her pants down and her arms crossed over her breasts, as though to protect herself, and one of her ears cut off. He said that it took police three hours to respond despite a police station barely a half mile away. 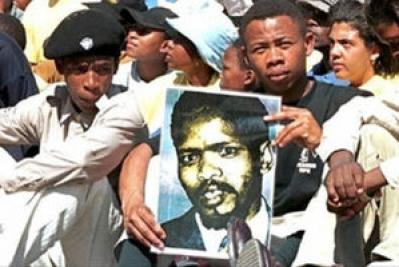 Now that Thandiswa Qubuda has died, a murder case has been opened, but the witness who called neighbors has gone into hiding in fear for his life.

Ayanda said that this tragedy is an example of patriarchy, of the epidemic of rape and violence in South African society, and of the incompetence, negligence, violence and/or militarization of the South Africa police.

KPFA: He listed other examples of police negligence or violence, including the police execution of unarmed schoolteacher and writer Andrés Tatane, during a street protest, the police massacre of more than 40 striking miners at the Lonmin Corp.’s Marikana Platinum Mine, the brutal police beating of protestors, and the death, earlier this week, of a Mozambican taxi driver whom police dragged down Johannesburg streets tied to the back of a police van. The taxi driver died of his injuries unattended in a police cell, but bystanders captured cell phone videos of the event, and eight police officers in that case have been arrested.