And he wasn’t the only one: Presidents of Tanzania and Haiti have also benefited from making women central to progress

by Selma James and Nina López

The funeral of President Hugo Chávez of Venezuela took place on International Women’s Day – a fitting day of departure for “the president of the poor” who was loved by millions, especially by women, the poorest. 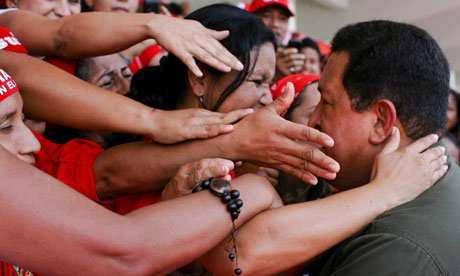 When Chávez was elected in 1998, the grassroots movement took a leap in power, and women in particular were empowered. Women were the first into the streets against the 2002 U.S.-backed coup; their mobilization saved the revolution. When asked why, woman after woman said: “Chávez is us; he is our son.” He was an extension of who they were as strugglers for survival.

Chávez soon learned that the revolution he led depended on women, and said so: “Only women have the passion and the love to make the revolution.” He acknowledged that the “missions” – the new social services which were at the heart of his popularity and which the state funded but did not run – were mainly created and run by grassroots neighborhood women.

In 2006, when announcing the partial implementation of Article 88 of the new constitution recognizing caring work as productive – a breakthrough worldwide – Chávez said: “[Women] work so hard raising their children, ironing, washing, preparing food … giving [their children] an orientation … This was never recognized as work yet it is such hard work! … Now the revolution puts you first. You too are workers, you housewives, workers in the home.”

Chávez was not the first movement leader who went on to head the government, to have understood women’s centrality to creating the new society they were striving to build.

Half a century ago, Julius Nyerere, leader of Tanzania’s independence struggle and its first president, aimed his program for development at the elimination of two ills: women’s inequality and poverty. He said: “Women who live in villages work harder than anyone in Tanzania,” working “in the fields and in the homes.”

“The truth is that in the villages the women work very hard. At times they work for 12 or 14 hours a day. They even work on Sundays and public holidays.” Whereas the village men “are on leave half their lives.” 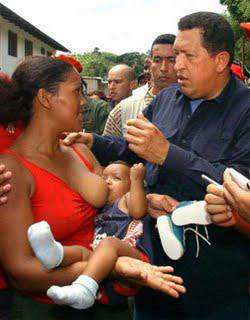 Nyerere’s ujamaa or “African socialism” – self-reliance and co-operation – was to keep Tanzania independent, by enabling it to refuse foreign loans. He insisted men must do their share. Equity was a question not only of justice but of economic necessity and political independence.

Encouraged by Nyerere, in one region, 17 ujamaa villages created a communal society based on equity among women and men, children and adults – all contributed what they could and all shared equally in the wealth produced. Their extraordinary society was destroyed by Nyerere’s power-hungry colleagues against his will, but it showed us what is possible.

Closer to Venezuela, women gained recognition under Jean-Bertrand Aristide, Haiti’s first democratically elected president (1990 and 2000). Determined to tackle extreme poverty and injustice, Aristide created a Ministry of Women’s Affairs, appointed women to ministerial posts, supported girl domestic workers, and survivors of military rape. As in Venezuela, women were the main organizers and beneficiaries of literacy and health programs; the rise in the minimum wage benefited them especially – sweatshop workers are mainly women.

Young people’s love for Aristide is legendary, but women’s devotion has been as constant. Two months after the devastating 2010 earthquake, women collected 20,000 signatures in three days demanding President Aristide’s return from exile – they needed him for reconstruction. A year later he was back, not as president but as educator, reopening the medical school he had founded for poor students, which the coup had closed.

In Bolivia, indigenous women were recognized as central to the mass mobilizations which propelled Evo Morales into the presidency. These included the “water wars,” which drove the multinational Bechtel out of Bolivia. Bechtel had privatised the water and criminalized people who collected rain water.

In 2008 the women were prominent in surrounding Congress for several days while the new constitution was debated; the white parliamentary elite intended to absent themselves to prevent a vote. The blockade forced them to sleep in the building ‘til the vote was taken. That constitution heralded a new level of power for women – from pay equity to recognition for the economic value of caring work.

As the president of the poor is laid to rest, the historic Operation Condor trial opens in Argentina, tackling the co-ordinated campaign of state terror of former Latin American dictatorships. We must recall a little-known aspect of Chávez’s legacy. Venezuela’s oil revenue supported Argentina’s Presidents Nestor and Cristina Kirchner, enabling them to pass laws removing the military’s immunity from prosecution.

The Mothers and Grandmothers of the Plaza de Mayo, who led the 1983 overthrow of the dictatorship and who had long campaigned for justice for the thousands the dictatorships raped, murdered and disappeared, have long paid tribute to Chávez – a most unusual military man.

They, like women all over South America and beyond, will be watching anxiously to see that the gains of the Bolivarian revolution are not undermined.

Selma James is founder of the International Wages for Housework Campaign, international coordinator of the Global Women’s Strike, a network of grassroots women and author of “The Power of Women and the Subversion of the Community.” She is the widow of C.L.R. James, author of the classic history of the Haitian revolution, “The Black Jacobins.” Nina López, from Argentina, founded Legal Action for Women and is joint co-ordinator of the Global Women’s Strike. This story first appeared in the Guardian of London.