San Francisco Mayor Ed Lee has made the announcement that clean energy and green job advocates in the Bay Area and beyond have waited nearly 12 months to hear: He supports full funding for the landmark GoSolarSF incentive program. 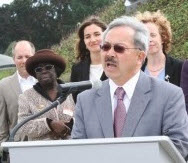 At the recent swearing-in of new California Energy Commissioner David Hochschild, Mayor Lee highlighted recent calls to “get back to the full funding” of GoSolarSF, which has helped over 2,000 homeowners, tenants, businesses and nonprofits install solar panels since 2008. Hochschild helped lead efforts to establish GoSolarSF as a San Francisco Public Utilities Commissioner from 2007 to 2008.

Mayor Lee’s announcement that the program has “lived through too many years of cuts” and that “it’s time to restore; we’re getting back, and it’s the right thing to do” was greeted with widespread applause among nearly 200 renewable energy, environmental justice and jobs supporters gathered for the occasion. Lee noted that he will be working with the SFPUC and “we are going to get that done.”

GoSolarSF, the solar rebate that pays for itself, has fueled a massive growth in the local solar industry since 2008 and put San Francisco on the map as a global cleantech leader. Nonetheless, the program was slashed from $5 million to $2 million last year, leading to funding shortfalls on the first day of availability, ratepayer backlash and pending layoffs at local solar companies.

SFPUC General Manager Harlan Kelly, the visionary engineer who guided the $4.6 billion overhaul of the Hetch Hetchy Water System before taking the agency’s helm late last year, is seen as the key to working with Mayor Lee to fully fund GoSolarSF for both the short and long term.

The mayor’s announcement was met with enthusiasm by Espanola Jackson, the longtime Bayview Hunters Point community icon who was saluted at Hochschild’s swearing-in and who was among the first low-income ratepayers to apply for the program. “I have seen solar panels go up throughout my community, a place where we lived for years and years with dirty power plants in our neighborhood,” said Jackson. “We should be helping every San Franciscan go solar.”

The Sierra Club has been a longtime supporter of the program, and helped provide the public push to both get GoSolarSF started and make it sustainable. “The program is making San Francisco a center of the renewable energy industry, bringing solar companies to the City and putting local residents to work,” said Sierra Club political director John Rizzo.

“While dirty fossil fuels have enjoyed subsidies and tax breaks for decades, San Francisco has found a way to help its ratepayers, particularly in low-income communities, to lower their energy bill down to nearly zero in many cases while supporting the environment and creating jobs along the way,” said Brightline executive director Joshua Arce, who has worked to support the GoSolarSF program through recent years of cuts.

As the state struggles with funding for its own solar incentive, San Francisco’s leadership locally and through well-positioned officials in Sacramento such as GoSolarSF co-founder and current Assemblymember Phil Ting demonstrates how government can create sustainable funding for renewables, ensure inclusion of low- and moderate-income ratepayers and target job creation in underserved communities.