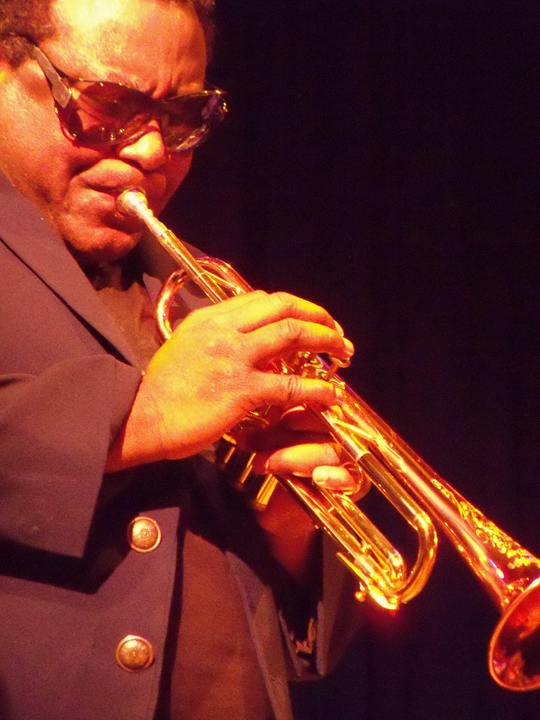 Opening night in Jack London Square, Miles smiled on us. The evening temperate, soft breeze and a new moon above – perfect. The club was full, so full the line snaked down the hallway into the kitchen – well, not quite, but use your imagination.

My friend had reserved seats, center stage second table from the front – perfect. I knew Joey DeFrancesco was performing with the super group, but I hadn’t realized Wallace Roney was Miles incarnate. The man breathes Miles, channels his chops, yet stays in his body. Stockier than when I last saw him, his face, however, still sweet, Roney would lay down the lines and then slip off stage or to the side while the other constellations did their orbit-thing – the rhythm section featuring Omar Hakim (drums) and Darryl Jones (bass) understated, yet present until it was time to lift the shades and shine.

I didn’t know the drummer or bassist, and while I knew guitarist Larry Coryell’s name, I don’t think I’d ever heard him perform before. Perhaps it wasn’t time, but the stars were aligned tonight and everyone felt it on and off the stage.

Unlike the original recording, which featured Davis’s second quintet – with saxophonist Wayne Shorter, pianist Herbie Hancock, bassist Ron Carter and drummer Tony Williams – recorded at Columbia’s 30th Street Studio in New York City on Oct. 24-25, 1966, this Miles Smiles featured Joey DeFrancesco on organ, so you know the place was smoking hot – ouch! The groove was so thick it had to find a seat. I’d catch a familiar line and then the men would take us on an extended trip; finally Roney called in to bring us back (smile).

Listening to Miles Smiles, the original now, I kind of like the Roney Super Group Special better – it’s more funky and rocking. Should I admit this, say this out loud? Listen for yourself:

Tonight’s show opening night looked sold out, and the men played four or five long songs – the kind of musical journey where you have time to get somewhere, have a meal or something before coming back. The only song I could hum all the way through was Wayne Shorter’s “Footprints.”

I read that this album is the first documented use by a straight ahead jazz ensemble of African rhythms. Who knew? Another note said that the men were a cohesive unit, pushing, inspiring, challenging one another. This was also true of the Miles Smiles ensemble. From Darryl Jones’s quiet presence, smiles and rock steady beat to Coryell’s great solos that stretched the space even more sometimes than DeFrancesco, who would, pressing on organ pedals, open his mouth and music would pour from his lips. It was kind of amazing. I never located the wires. Hmm.

It was that kind of night. 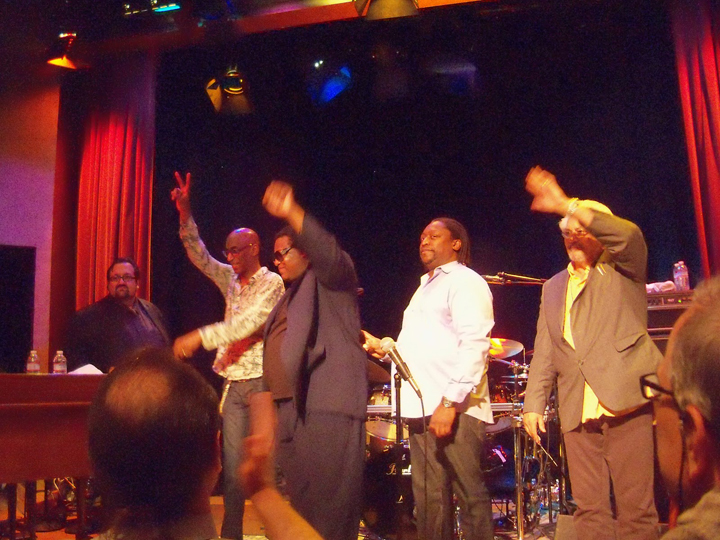 After the bows and waves, the men came back for an encore. Roney teased us with name that tune, not even a Miles, rather Cyndi Lauper’s “Time after Time.”

What a fitting metaphor.

The men move on after tomorrow’s two shows: 8 and 10 at Yoshis in Oakland.