Three weeks ago, I wrote an article entitled “A Huge Hunger Strike at Guantánamo,” in which I reported the stories emerging from Guantánamo of a prison-wide hunger strike, the most severe since George W. Bush was president, and the gulf between what was being reported by the prisoners, via their attorneys, and what the U.S. authorities were saying. 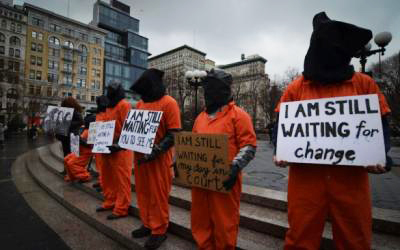 At the time, the authorities stated that just six of the 166 men still held were classified as hunger strikers and that five were being force-fed, through tubes inserted up their nose and into their stomachs – these men all being long-term hunger strikers, at least one of whom has, alarmingly, been on a hunger strike since 2005.

It was, to be frank, inconceivable that the hunger strike had been invented by the prisoners, when attorneys reported visiting their clients, and seeing that they had lost 20 to 30 pounds in weight. However, it took until March 15, as Carol Rosenberg reported for the Miami Herald, for “the first admission of a protest” to be made by the authorities.

Navy Capt. Robert Durand, a spokesman for the prison authorities, denied “a widespread phenomenon, as alleged,” but conceded, “for the first time after weeks of denial,” as Rosenberg put it, “that the number had surged to 14 from the five or six detainees who had for years been considered hunger strikers among the 166 captives at Guantánamo.”

Since the blanket denials were dropped and the media began to take an interest in the story, focusing the world’s attention on the problems at Guantánamo to a greater degree than has happened for many years, the authorities have steadily acknowledged that more and more prisoners are on a hunger strike. Last week, the numbers went up to 21 and ended the week at 26, and this week the latest tally is 31 [Note: Since writing this article, the figure has been revised up to 37].

That, however, is still a far cry from the claims made by the prisoners and their attorneys, who state that the majority of the prisoners in Camp 6 – 130 men in total – are involved in the hunger strike.

Whatever the exact figures, transparency and honesty are not attributes that the U.S. government can claim when it comes to Guantánamo, and it is difficult to see why the authorities should be trusted. As well as disputing the figures, the government also claims that the main reason given for the hunger strike is a lie.

Fifty-one attorneys wrote to defense secretary Chuck Hagel on March 14, explaining that the hunger strike “was precipitated by widespread searches of detainees’ Qur’ans – perceived as religious desecration – as well as searches and confiscation of other personal items, including family letters and photographs, and legal mail, seemingly without provocation or cause. We also understand that these searches occurred against a background of increasingly regressive practices at the prison taking place in recent months, which our clients have described as a return to an older regime at Guantánamo that was widely identified with the mistreatment of detainees.”

Chuck Hagel has not responded, but the authorities deny the prisoners’ claims.

However, there is another reason for the hunger strike that is rather harder to deny; namely, that the prisoners despair of ever being released – over four years after President Obama promised to close Guantánamo, and despite 86 of the remaining prisoners being cleared for release by an interagency Guantánamo Review Task Force that the president established in 2009.

The president himself is to blame for imposing a blanket ban on the release of two-thirds of these men – all Yemenis – after a Nigerian man, Umar Farouk Abdulmutallab, tried and failed to blow up a plane bound for the U.S. on Christmas Day 2009. Abdulmutallab was recruited in Yemen, but the president’s ban imposes an unjustifiable life sentence on the Yemenis on the basis of their nationality alone.

Also to blame is Congress, where lawmakers introduced legislation designed to block the release of prisoners, including an obligation on the defense secretary to certify that any released prisoner would not subsequently be able to engage in anti-American activities – a certification that seems to me to be impossible to make.

As a result, only four prisoners have been released in the last two years, and during that same time period three prisoners have died. The prisoners also understand these statistics: At present there is a 43 percent probability that if they manage to leave Guantánamo, which is unlikely, it will be in a coffin. 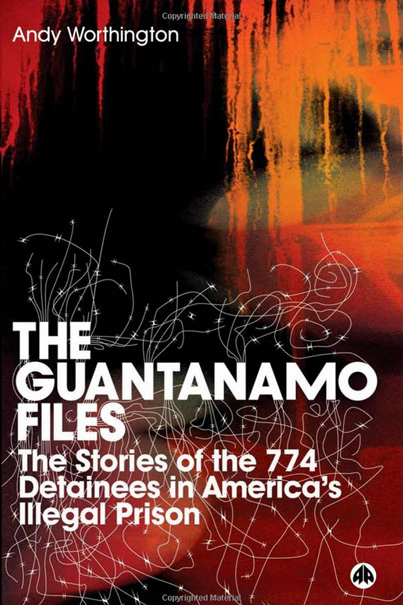 The authorities have not spoken officially about the prisoners’ despair, although in Congressional testimony last week, Gen. John F. Kelly, the naval commander at Guantánamo, acknowledged the reality of it when he said: “They [the prisoners] had great optimism that Guantánamo would be closed. They were devastated, apparently … when the president backed off – at least their perception – of closing the facility. He said nothing about it in his inauguration speech. He said nothing about it in his State of the Union speech. He has said nothing about it. He’s not – he’s not restaffing the office that … looks at closing the facility.”

What happens next is unclear. People will die unless action is taken to bring the hunger strike to an end, and President Obama needs to stir himself from his torpor and act to bring to an end the disgraceful situation whereby prisoners cleared for release by the government may be imprisoned for the rest of their lives because it has proven to be politically inconvenient to release them. One of these men, Adnan Latif, a Yemeni, died at Guantánamo last September, and there are now understandable fears that others will die.

Instead of responding, however, President Obama is doing nothing – or rather, just watching as officials establish that nearly $200 million is required to renovate the facilities at Guantánamo, including, as Gen. Kelly let slip, $50 million to replace Camp 7, the secretive camp where the 16 “high-value detainees,” including Khalid Sheikh Mohammed, are held.

The president, I’m sorry to note, escaped the scrutiny he deserved when these figures emerged, because the cost, of course, includes the figures for the cleared prisoners. It was established in November 2011 that it costs $72 million a year to hold the cleared prisoners; and to that can be added half of the $150 million that is not being spent on the “high-value detainees.” With the annual cost, that is $150 million that will be spent this year on holding men that the U.S. government decided three to four years ago it no longer wished to hold.

When asked about the reasons for the hunger strike, Capt. Durand stated that it was an “orchestrated event intended to garner media attention.” That is marginally less insulting than when, in 2006, the death of three prisoners, reportedly by suicide, was greeted by the prison’s commander as “an act of asymmetrical warfare,” but only just. If prisoners die as a result of this hunger strike, their deaths will be real, and not a ploy to “garner media attention.”

Capt. Durand is just a mouthpiece, of course, but the powerful institutions he represents – the Obama administration and the Pentagon – have no excuse to criticize those who, after over 11 years in an abominable experimental prison that should never have existed, and should not still be open, are starving themselves to protest the injustice of their imprisonment and their dashed hopes that they will ever be released.

In response to the ongoing hunger strike, the International Committee of the Red Cross announced on Wednesday that it was bringing forward a planned prison visit by a week. Its representatives need to not only see the prisoners; they also need to see that plans are underway to free some of those 86 men who were cleared for release at least three years ago but are still held.

Andy Worthington, author of “The Guantánamo Files: The Stories of the 774 Detainees in America’s Illegal Prison” and “The Complete Guantánamo Files,” a 70-part, million-word series drawing on files released by WikiLeaks in April 2011, and co-director of the documentary “Outside the Law: Stories from Guantánamo,” can be reached on Facebook, Twitter, Flickr and YouTube. Consider joining the new “Close Guantánamo campaign.”

The season of death at Guantánamo