TriceEdneyWire.com – It is a story that has unfolded all too often. The owner of a small business finds it simply impossible to pull through the torturous economy. The doors shut or the website shuts down and another business venture comes to a close.

Without incubation and support, the nation’s small businesses – including Black-owned businesses which are doubly vulnerable due to a history of racism and discrimination – would go under at alarming rates. In short, they need an advocate.

This is the reason that when the leaders of the National Bankers Association, an organization of 37 mostly Black-owned banks, began pondering prospective recipients of their annual “Beyond the Call of Duty Award,” its president says they did not have to look very far. No question, it was Marie Johns, deputy administrator of the U. S. Small Business Administration, he said. 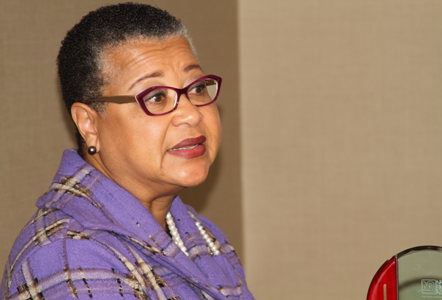 “I think Marie Johns has an extraordinary record of serving the small business community in our country. She has shown a genuine interest in working with all small businesses. She’s been fair and inclusive, she believes in diversity, she’s shown a great sensitivity to the struggle of small businesses,” says Michael Grant, president of the National Bankers Association, after bestowing Johns with the award during the NBA’s Annual Legislative/Regulatory Conference last week.

In prepared remarks, he said, “Ms. Johns has developed a reputation for being a good listener. She not only listened to community bankers and small business owners, she acted,” he said. In fact, Grant says, Johns has served so well in the position that he believes she should be promoted to the top of the agency. “I think she would be an excellent candidate to be SBA administrator,” he said in an interview, noting that the agency has even greater potential.

An article by Claudio E. Cabrera, originally posted last fall on business website The Street.com and re-published this month on BlackEnterprise.com, is headlined, “Minority Businesses a Big Driver in the U.S. Small Business Economy.”

The article reports that “the number of black-owned businesses rose a noteworthy 60.5 percent to 1.9 million from 2002 to 2007, more than triple the 18 percent rate for businesses established nationally, according to the U.S. Census Bureau’s Survey of Business Owners.”

It continues, “During the most recent period for which there is Census data, black-owned businesses generated $137.5 billion in receipts, up 55.1 percent.”

Johns agrees that as Black and other minority businesses grow, the economy grows.

“In 2013, minority-owned small businesses are one of the fastest-growing segments of our economy and an engine of opportunity for millions of hard-working men and women in our communities,” Johns said in a prepared statement issued after last week’s award. “Empowering these businesses, and embracing an inclusive view of entrepreneurship, is essential to our long-term economic growth and global competitiveness.”

She also agrees with Grant that more must be done. “We must ensure that more people across the country have access to the capital, technical assistance and support networks they need to help them start businesses, create jobs and grow our economy.”

Suring up Black banks in order to serve their communities is a part of that mission, she says. “Over the past four years, the U.S. Small Business Administration has been working hard to create more access for entrepreneurs and more opportunities for lenders to work with the small businesses in their communities. The NBA and our network of lending partners are on the front lines of these efforts to revitalize our economy and communities.”

In her statement, Johns ticked off a list of services available to strengthen small businesses and “undeserved communities.” They include the Small Loan Advantage (SLA) program and Community Advantage lenders, she listed.

Deputy administrator Johns is already a presidential appointee, nominated by President Obama on Dec. 17, 2009, and confirmed by unanimous consent in the Senate. Her bio on sba.gov boasts more than $30 billion in lending to more than 60,000 small businesses across the country.

“That is the most capital going to small businesses in the history of the SBA,” it states. She doesn’t have to convince Grant: “At a White House news briefing three years ago, President Barack Obama announced a number of new initiatives designed to streamline SBA guidelines and render the agency more user-friendly. Working in tandem with the administration, Ms. Johns used her business savvy and exceptional executive skills to bring a more modern and less cumbersome SBA to community banks and small businesses, in general, and minority banks and minority-owned business enterprises in particular.”

Trice Edney News Wire – provocative, empowering, unapologetically Black – provides news stories, investigative reports and opinion columns to more than 1,000 newspapers, radio stations and websites around the nation and can be reached at fatima@nationalnewsreleases.com.