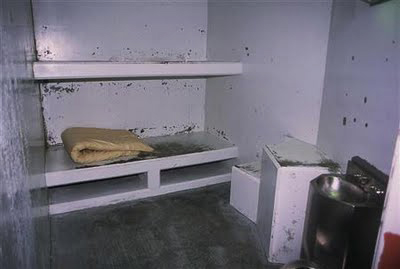 The ruling comes following months of campaigning and litigating by Gov. Brown and the California Department of Corrections and Rehabilitation (CDCR) to end federal oversight of the California prison system. Friday’s ruling is the latest enforcement of the 1995 case Coleman v. Wilson, a federal class action suit filed against then-California Gov. Pete Wilson, which resulted in federal oversight over CDCR’s mental health and medical treatment that continues under the jurisdiction of Judge Karlton.

An additional federal class action lawsuit, Plata v. Schwarzenegger, was merged with the Coleman lawsuit and in 2009, California was ordered to reduce its prison population to 137 percent capacity, as it was determined that constitutionally acceptable medical and mental health delivery was hindered by the beyond-capacity prison population, which was deemed an Eighth Amendment violation.

Gov. Jerry Brown has gone on the record to claim that California has “one of the finest prison systems in the United States” and no longer requires federal oversight. In a January 2013 press release, Gov. Brown stated: “After decades of judicial intervention in our correctional system and the expenditure of billions of taxpayer dollars, the time has come to restore California’s rightful control of its prison system.” In February, CDCR announced the completion of a new mental health treatment building at the California Medical Facility, and declared that the facility “reinforces CDCR’s ongoing commitment to provide a constitutional level of mental health treatment in California’s prisons.”

Judge Karlton’s ruling, however, strongly rebukes these claims by Brown and CDCR, saying “based on defendants’ conduct to date, the court cannot rely on their averments of good faith as a basis for granting termination. There is overwhelming evidence in the record that much of defendants’ progress to date is due to the pressure of this and other litigation.”

A major factor in Judge Karlton’s ruling was the significant rate of suicides in the California prison system, which has previously been reported to be well above the national prison average.

Friday’s ruling might force CDCR to undertake more serious efforts to prevent more people in their custody from taking their own lives.

“In summary, for over a decade a disproportionately high number of inmates have committed suicide in California’s prison system. Review of those suicides shows a pattern of identifiable and describable inadequacies in suicide prevention in the CDCR,” Judge Karlton writes. “Defendants have a constitutional obligation to take and adequately implement all reasonable steps to remedy those inadequacies. The evidence shows they have not yet done so. In addition, while defendants represent that they have fully implemented their suicide prevention program, they have not. An ongoing constitutional violation therefore remains.”

Judge Karlton cited the overuse of solitary confinement, particularly among individuals with severe mental health problems, as a continuing problem in the California prison system. The ruling states that such individuals “face substantial risk of serious harm, including exacerbation of mental illness and potential increase in suicide risk.”

A major factor in Judge Karlton’s ruling was the significant rate of suicides in the California prison system, which has previously been reported to be well above the national prison average.

The state of California argued before the court that they have “developed and implemented procedures for placing and retaining inmates with mental health needs in any administrative segregation or security housing unit.” Further, the state of California argued that while individuals diagnosed as “mentally ill” are placed in segregation units, their needs are “being appropriately met.”

Judge Karlton dismisses this claim, stating that “this contention is not supported by defendants’ own experts.” He goes on to write that the state of California’s experts “describe the ‘environment of administrative segregation’ as ‘generally non-therapeutic.’ They recommend that housing inmates with serious mental disorders be ‘as brief as possible and as rare as possible.’”

Judge Karlton notes that this does not appear to be the case and notes that California’s own experts have commented that these prisoners should be at the top of the list for receiving transfers to mental health facilities. “These issues, until remedied, mean that seriously mentally ill inmates placed in administrative segregation units continued to face a substantial risk of harm,” Judge Karlton writes.

Judge Karlton cited the overuse of solitary confinement, particularly among individuals with severe mental health problems, as a continuing problem in the California prison system.

The high rate of suicides in California’s segregation units, where most individuals are held in solitary confinement, has been heavily documented by Dr. Raymond Patterson, a court appointed consultant to CDCR.

In a 255-page report filed in March of this year, Dr. Patterson blasted CDCR for its repeated failures to instate any of the suicide prevention measures he has suggested over many years. Dr. Patterson announced in his 14th annual review of prison suicides that he was quitting, as “it has become apparent that continued repetition of these recommendations would be a further waste of time and effort.”

In brief, the report found that:

Below is a chart presented in the report indicating the date and location of the suicides. Notable is the high number of suicides committed in segregation units. 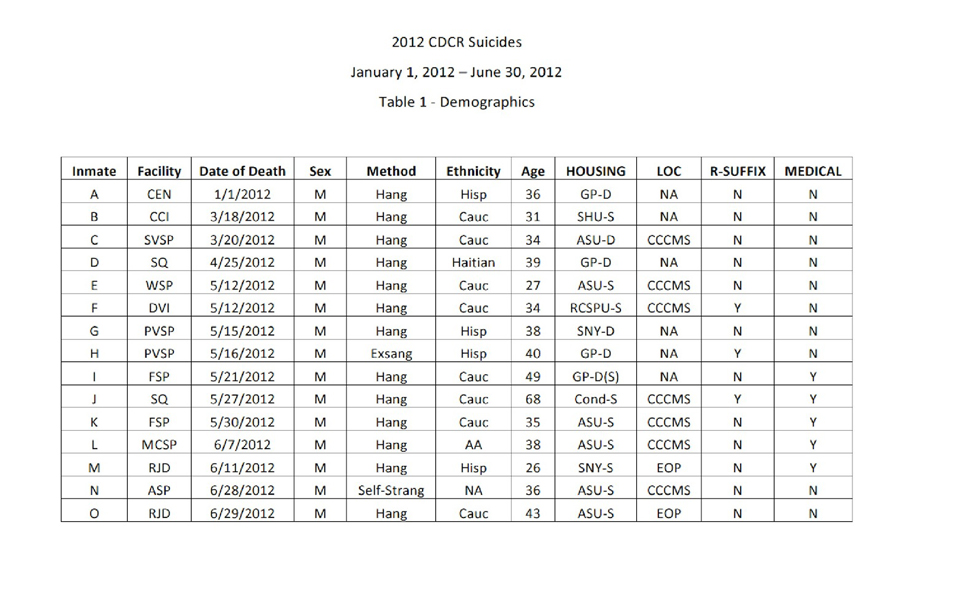 The 2012 report notes that people in solitary confinement have a 33 times higher likelihood of committing suicide in the California prison system.

The report of Dr. Patterson on the 34 suicides in the California prison system in 2011 provides a similarly bleak picture.

In brief, the report shows that:

In the report, Dr. Patterson reported that “the high rate of inadequacy in assessment, treatment or intervention is generally consistent with previous years and remains unacceptably high.” 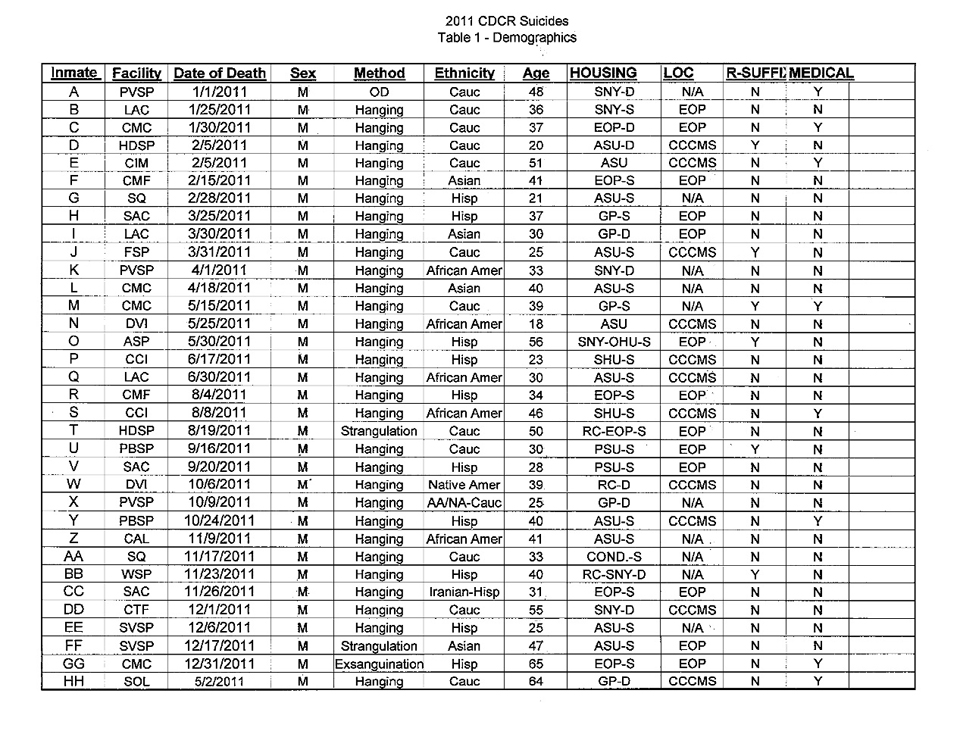 The report also adds further – and disturbing – details to cases of suicides previously reported by Solitary Watch. Pages 211 to 217 document the case of Armando Cruz, who committed suicide on Sept. 20, 2011, in California State Prison, Sacramento’s Psychiatric Services Unit. Cruz, who was incarcerated at the age of 17 for an attack on a police officer, entered the prison system in 2003 with a highly documented history of schizophrenia. Cruz was repeatedly placed in isolation units for behaviors that were largely committed during hallucinations and bouts of psychosis over the course of eight years. Cruz repeatedly engaged in self-harm, including self-strangulation and self-castration, yet was determined to have a low chance of suicide.

Solitary Watch obtained Cruz’s CDCR documents in late 2012. Documentation of Cruz’s final months, however, were missing from the documents CDCR sent. In April and May, Cruz was noted in the documents to have invented an imaginary family living with him in his isolation cell; he was also noted to have been placed on suicide watch between April 29 and May 10, 2011. Documentation available to Solitary Watch runs out after July. The Patterson report fills in this gap and reports previously unknown information:

“However, at the end of August 2011, he head-butted and pushed a correctional officer during escort. Subsequently, the inmate received an RVR, a mental health assessment, and was seen by a psychiatrist and by his primary clinician. The last mental health contact was by the primary clinician on 9/09/11. However, according to the suicide report, the inmate did not see a clinician as per guidelines the following week because his primary clinician was away from the institution and there was an emergency absence by the backup clinician. The inmate committed suicide on 9/20/11.”

The Patterson report states that when Cruz was found hanging in his cell, he was not given CPR for 10 minutes following his discovery, a violation of the prison’s own policy.

Dr. Patterson reported that “the high rate of inadequacy in assessment, treatment or intervention is generally consistent with previous years and remains unacceptably high.”

The report also sheds light on the final day of Alex Machado, who was incarcerated at Pelican Bay State Prison’s Administrative Segregation Unit. Pages 228 to 237 discuss his suicide. Dr. Patterson found that Machado’s death “appears to have been both foreseeable and preventable. The inmate quite clearly had a history of suicidal ideation and at least one suicide attempt. He was noted to have been decompensating, particularly during the month of October 2011 and especially in the 24 hours prior to his death.”

Dr. Patterson also describes the extent to which Machado had been agitated on his final day:

“During the early afternoon at 12:05 p.m., the psych tech checked the inmate’s blood pressure at his request and the inmate said that he would take a PRN medication if it would help …. The inmate was again reported as having chest pains at 11:40 p.m. and 11:50 p.m. The log book indicated that the RN was on the unit to see the inmate and the inmate ‘seems very confused.’ The inmate was returned to his cell at 12:15 a.m. Welfare checks were completed between 12:05 a.m. and 12:15 a.m. and again at 12:45 a.m., when the inmate was discovered hanging in his cell.”

Dr. Patterson found that Machado’s death “appears to have been both foreseeable and preventable.”

Friday’s ruling might force CDCR to undertake more serious efforts to prevent more people in their custody from taking their own lives.