Black people have largely been locked out of construction work in San Francisco since 1998. That’s a shame, because construction work is a solution to many of the ills in the Black community. Construction wages are high, and when Black contractors have work, they are generally eager to train Black workers regardless of their school, police or prison records. 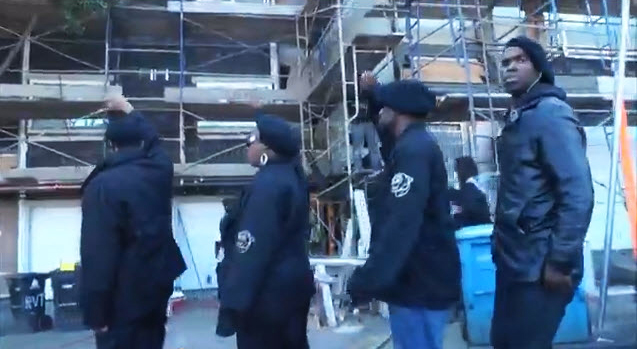 And there’s plenty of construction work going on in San Francisco – $5 billion worth, with 38 cranes raised across the City’s skyline. The San Francisco African American Chamber of Commerce is holding a symposium on the state of Black construction-related business opportunities in San Francisco on Thursday, June 20, 6-8 p.m., at the Southeast Campus of City College, 1800 Oakdale Ave., in Bayview Hunters Point.

One of the largest construction projects currently underway in Bayview Hunters Point, San Francisco’s Black heartland, is the rehabilitation of Ridgeview Terrace, a large apartment complex headquartered at 140 Cashmere at the top of Hunters Point Hill. Few local Black residents can be seen at work there.

The contractor for the Ridgeview makeover is KCK Builders, a white-owned company based in San Rafael that completed construction on the new Bayview Library earlier this year. KCK Builders had been the second low bidder on the library and was awarded the contract after it was taken from Hunters Point-based Liberty Builders, owned by Willie Ratcliff, who is also the publisher of the San Francisco Bay View newspaper and had planned to build the library with local Black subcontractors and workers.

Records show that Black contractors and workers are master builders who consistently bring their work in on time and under budget.

KCK Builders ran up the cost of the library by $2 million over the price bid by Liberty Builders when KCK owner Mike Hannegan was pressed to use Black subcontractors, who didn’t trust him to treat them or pay them properly and, to compensate, raised their prices. Their suspicions were later confirmed when at least some of those subcontractors were not fully paid for their work.

Ironically, the increased cost of the library construction, caused by legitimate distrust of the white contractor who had in effect taken the project away from a Black contractor, was used in a June 13 article in the San Francisco Chronicle to argue that local hire policies like the one passed unanimously by the San Francisco School Board on Tuesday, June 11, “push up construction costs.”

Records show, however, that Black contractors and workers are master builders who consistently bring their work in on time and under budget. Prior to the 1998 lockout, Blacks successfully completed millions of dollars in construction work in San Francisco, and construction wages supported hundreds of Black families. The purpose of the lockout was to eliminate Black competition.

Many of these issues are addressed in the following video, taken by Earl Black as part of an upcoming documentary, showing the Carpenters and the Black Riders leading a protest and temporary shutdown of the Ridgeview Terrace construction project to hold KCK Builders accountable.

Fly Benzo (in the KCK Builders jobsite office): You guys are running construction in our community and discriminating on the hires. And they say if we want 50 percent of the jobs, there’s going to be problems.

Fly Benzo (speaking to a Black assistant manager in the management office): We want to work with you, not against you. I’m one of the only people taking a stand for our youth, making sure we get a chance and an opportunity to make a living in this community, ‘cause that’s the only thing that’s going to change our circumstances and what we’re going through, like the violence.

We wouldn’t have the violence if everybody had a job paying $30 an hour. So I just want you to work with us and not against us and we also want to set up a meeting with Mr. Hollingsworth …

In order for us to make it work, our people have to have jobs. My attitude about it is that fair exchange is no robbery. If we’re going to develop this community, we need an opportunity to upgrade the economic standards while we’re circulating the dollars – to do the building, to do the streets, to take the wires underground so it’s a nice neighborhood where you don’t see wires everywhere.