The Feb. 29, 2004, kidnapping and coup d’état began a brutal ongoing U.S.-U.N. occupation that aimed to suppress Haiti’s people’s movement and roll back the hard-won democratic gains since the ouster of Baby Doc Duvalier in 1986. The elimination of the traditional repressive and coup-fomenting Haitian military during the democratic period in 1995, one of the most popular actions of Jean-Bertrand Aristide’s presidency, forced the direct and overt involvement of U.S., French and Canadian troops in the destruction of Haiti’s democracy. Soldiers from other nations, including Ecuador and Brazil, later joined this occupation army, named MINUSTAH, which currently numbers 9,357 uniformed personnel. 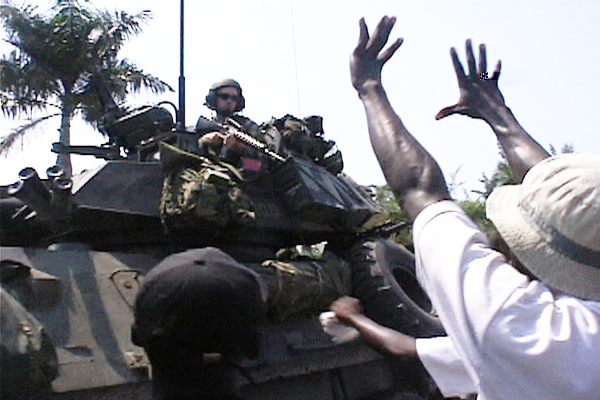 In July 2012, the illegitimately (s)elected president of Haiti, Michel Martelly, signed a cooperation agreement with Ecuador to train a new Haitian army. Later that month Brazil’s Defense Ministry confirmed it is prepared also to help Haiti restore its army. Martelly, who became president in a vote in which fewer than 20 percent of eligible Haitians participated, has made the reconstitution of the hated Haitian army one of his campaign commitments. The Haitian majority bitterly opposes a new army, because historically the army has been used as a tool of internal repression. As with MINUSTAH, many fear a new army will be used primarily to suppress the grassroots movement for democracy.

According to Jeb Sprague in “Paramilitarism and the Assault on Democracy in Haiti,” the history of Ecuador training Haiti’s military personnel goes back to the period of the first coup against President Aristide from 1991 to 1994, when a number of Haitian Armed Forces cadets from wealthy backgrounds trained in Ecuador. Upon their return, they were first integrated into presidential palace security, then transferred into important positions in the police. They became known as “The Ecuadorians” and “quickly gained a reputation for brutal tactics.” Included in this group was coup plotter Guy Philippe.

Since the United States traditionally maintained its influence in Haiti through the Army, control of the police became increasingly important with the army disbanded. In 1999, the director of the U.S. Justice Department’s ICITAP (International Criminal Investigation Training Assistance Program) – which was in charge of choosing and training members of the newly-formed PNH (Haitian National Police) – was fired for protesting the recruitment of PNH trainees by the CIA. During the presidency of Rene Preval from 1996 to 2000, Preval’s security chief, Bob Manuel, who was close to the U.S., began to stack the leadership of the Haitian police with “The Ecuadorians.” They became involved in ongoing coup plotting after President Aristide won his second term in 2000.

After a planned coup attempt failed in 2000, several plotters from inside the police escaped to the Dominican Republic. Haitian Foreign Minister Fritz Longchamp requested their extradition, but Dominican authorities refused to hand them over, then announced they had been “‘given asylum in Ecuador,’ a destination likely facilitated by U.S. officials who had helped train the Haitian military and were now operating an air base in the Ecuadorian port city of Manta.” By early 2001 they were back in the DR, along with other former members of the disbanded Haitian army, including death squad leader Louis Jodel Chamblain, getting tactical advice and “plotting new attacks against the Lavalas government and its supporters.”

Many of these same plotters participated in the paramilitary insurgency that led to the U.S. coup d’état and kidnapping of Aristide on Feb. 29, 2004, the date the United Nations Security Council adopted Resolution 1529 authorizing the Multinational Interim Force (MIF) of U.S., French and Canadian troops to occupy Haiti, which has been under U.N. occupation ever since.

They were joined and later replaced by other MINUSTAH countries, still under the banner of the United Nations. This force has been led by Brazil and includes many participant armies from South and Central America who have undergone U.S. military training at the infamous School of the Americas. Their main and ongoing effort has been to suppress the popular movement for justice and democracy that wants an end to the plunder of Haiti’s resources and has consistently supported Aristide. In the efforts to fully restore the institutionalized repressive apparatus, the Martelly occupation government has been working to re-establish the brutal Haitian military.

Former U.S. ambassador to Haiti Kenneth Merten said that Washington had no plans to help fund the army but would not interfere with Haiti’s right to set it up, but many remain skeptical. Martelly acknowledged that some countries have been reluctant to contribute but maintained that a military force was necessary to replace U.N. troops when they leave. He claims he wants to create a force that will help with development, natural disasters, protecting borders and supporting the police in security issues, but Haitians who have been victimized historically and by his recent attempts at army restoration do not believe him, fear continued repression and oppose a new army.

Some U.S. and U.N. officials seem concerned that restoring the army could undermine international efforts to train and equip a new civilian police force, a key goal of the U.N. mission in Haiti, but Haiti’s Defense Minister Rodolphe Joazile said Haiti’s plan did not signify any sidelining of international efforts to reinforce its civilian police. Due to financial constraints, the army would be relaunched with only about 1,500 troops, Joazile said. That’s 1,500 too many, according to the majority of Haitians.

Charlie Hinton is a member of the Haiti Action Committee; visit http://www.haitisolidarity.net/. He may be reached at ch_lifewish@yahoo.com.