One hundred and fifty years ago, on June 2, 1863, Union forces led by Harriet Tubman and Col. James Montgomery engaged in a daring and wildly successful raid up the Combahee River in South Carolina.

Tubman and Montgomery had set out the night before from Beaufort in three U.S. Navy gunboats. Montgomery commanded a detachment of soldiers from the 2nd South Carolina Volunteers, an all-Black infantry regiment, while a company from the 3rd Rhode Island Heavy Artillery manned the ships’ guns. Tubman, who had scouted the area and received widespread credit for planning the raid, accompanied Montgomery and was widely seen as jointly leading the operation.

The two Union gunboats which reached the Combahee on the morning of June 2, 1863, proceeded up the river, landing troops as they went. One gunboat, the Harriet A. Weed, anchored near a plantation, while the other, the John Adams, continued upriver, eventually destroying a pontoon bridge and shelling Confederate troops.

The Commonwealth, a Boston newspaper, reported on July 10 that the expedition’s successes included “destroying millions of dollars worth of commissary stores, cotton, and lordly dwellings, and striking terror into the heart of rebeldom,” all “without losing a man or receiving a scratch.” The raid was also intended to remove mines (“torpedoes”) placed by Confederate forces along the river and, thanks to Tubman’s intelligence efforts, this, too, was accomplished.

The raid had one final objective: to confiscate valuable Confederate property, what Union forces still tended to refer to as “contraband.”

This goal proved rather simple for Tubman and Montgomery. As word spread of the operation moving along the river, slaves began leaving their work in the fields and rushing to the riverbanks to board the gunboats, overwhelming overseers and soldiers trying to stop them.

“I nebber see such a sight … we laughed, an’ laughed, an’ laughed. Here you’d see a woman wid a pail on her head, rice a smokin’ in it jus as she’d taken it from de fire, young one hangin’ on behind, one han’ roun’ her forehead to hold on, ‘tother han’ diggin’ into de rice-pot, eatin’ wid all its might; hold of her dress two or three more; down her back a bag wid a pig in it. One woman brought two pigs, a white one, an’ a black one; we took ‘em all on board; named de white pig Beauregard, an’ de black pig Jeff Davis. Sometimes de women would come wid twins hangin’ roun’ der necks; ‘pears like I nebber see so many twins in my life; bags on der shoulders, baskets on der heads, and young ones taggin’ behin’, all loaded; pigs squealin’, chickens screamin’, young ones squallin’.” – from Sarah H. Bradford’s “Scenes in the Life of Harriet Tubman” (1869), Pages 40-41 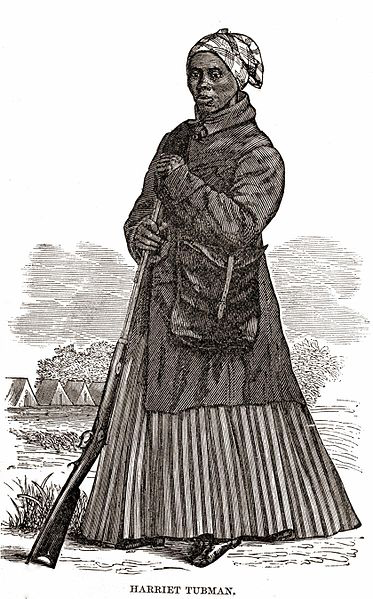 In all, Tubman reported that the raid liberated 756 enslaved Blacks along the Combahee – or, perhaps more precisely, gave them the opportunity to liberate themselves – and that nearly all of the able-bodied male slaves promptly joined the Union’s colored regiments.

The lasting impact of the raid

The raid’s success, and the role of Blacks in leading and conducting it, as well as the hundreds of slaves who rose up at the first sight of Union troops, made a deep impact on the Union public. At the same time, it was frightening and demoralizing for the Confederate side, all the more so because of what the raid implied about what the South’s enslaved population wanted, and was capable of.

In fact, in an effort to minimize the impact on morale and ideology, the official Confederate report was forced to lay the blame for the raid on “a parcel of negro wretches, calling themselves soldiers, with a few degraded whites.”

The broader significance of the Combahee River Raid, I think, is that it shattered two persistent myths which had long impeded the arrival of emancipation for Black Americans. First, the raid demonstrated very publicly that Black troops were not merely fit as laborers or cannon fodder but were every bit as capable as their white brethren at executing complex military operations under the most challenging circumstances.

Second, the raid’s success in liberating hundreds of Blacks – or, in allowing them to liberate themselves – electrified the Northern and Southern publics and defied the Confederacy’s insistence on the quiet loyalty of its enslaved population. The raid showed convincingly that enslaved Blacks were, in fact, eager for freedom and willing to rise up on a moment’s notice, if given the opportunity, and to then join Union forces in droves and fight back.

Together, these two powerful truths helped to show the necessity and rightness of emancipation, at a time when the Northern public, in particular, was only beginning to wrestle with that very issue.

James DeWolf Perry is the executive director of the Tracing Center. He received an Emmy nomination as the principal historical consultant for the PBS documentary “Traces of the Trade: A Story from the Deep North,” in which he also appears as a descendant of the DeWolf slave-trading family of Bristol, R.I. Since the film’s premiere, James has spoken about his family’s, and the nation’s, historic role in slavery, and has facilitated discussions about the nation’s legacy of slavery and race across the country and abroad. He can be reached through his blog, The Living Consequences.