The literary work of Robert Beck, aka Iceberg Slim, has captivated the imaginations of ghetto-dwellers for decades. Much different from the writings of Ralph Ellison, Toni Morrison and Richard Wright, who all hold up a piece of the American pantheon of legendary Black writers, the work of Iceberg Slim was a chronicle into what was going on in the underbelly of capitalism, America’s ghettos.

Without pulling punches, the street language and vivid imagery of Beck, like that of Donald Goines and others provided a window into a world that most people were only barely aware of. Before there was gangsta reality rap to talk unapologetically about the ghetto Black experience, there was Robert Beck writing under the pseudonym of Iceberg Slim.

Finally, there is a documentary, by Ice-T and Jorge Hinojosa, to talk about the life and lessons of this literary giant as well as talk to some of the many people we see as greats who were influenced by Beck’s work. You could see the captivating “Iceberg Slim: Portrait of a Pimp” at the San Francisco Black Film Fest this year. It screens Friday, June 14, 4 p.m., at the African American Arts and Culture Complex, 762 Fulton, San Francisco. Here is director Jorge Hinojosa in his own words.

M.O.I. JR: What prompted you to do a documentary about the prolific writer Iceberg Slim? Did you grow up reading his work?

Jorge Hinojosa: I was introduced to Iceberg Slim’s book by Ice-T almost 30 years ago just when I started managing Ice. He told me he got his name as a result of reading Iceberg Slim. The idea came up because I thought there was going to be a SAG strike and wanted to figure out something Ice could do if that happened. As it goes, SAG made a deal the next week and Ice said I should direct it. I also financed it 100 percent.

M.O.I. JR: After completing the film, why do you think that Iceberg Slim aka Robert Beck had such a profound impact on America’s Black communities?

Jorge Hinojosa: Because he gave a voice to the voiceless – Black inner city men and women. It’s the same reason rap became so huge. Because it spoke of a world, in an authentic way, that many people knew about but had never creatively been expressed. He was able to articulate in a profound way what was happening in the Black inner city. The politics, pain, conflicts and contradictions were eloquently laid out in a transcendent way.

M.O.I. JR: How long did it take for you to complete this film? How did you get Beck’s whole family in the film, including two wives and four children, as well as comedian Chris Rock to be interviewed?

Jorge Hinojosa: Three years, because my work schedule managing Ice-T and his projects keep me very busy. I originally reached out to the publisher, who put me in touch with Misty, who then introduced me to the family. The family knew Ice-T was the exec producer and a massive fan, so that gave me a lot of credibility to get them to say yes as well as the rest of the whole cast. Ice is such a power house in the hood that his name is like a skeleton key to getting people to say yes.

M.O.I. JR: What contribution did Robert Beck make to American literature? How do you believe Beck sizes up to other legendary Black writers in America, including James Baldwin, Toni Morrison, Donald Goines, Alice Walker, Richard Wright, Maya Angelou and others?

Jorge Hinojosa: He was the first to tell stories from the Black underworld that no one had done before. His books told stories that had huge range that were the first of their kind, like being a pimp (“Pimp”), Black homosexuality (“Mama Black Widow”) and being interracial (“Trick Baby”) etc. His writing was also extremely poetic, lyrical, and vivid when describing scenes that are abominable. He also has an emotional transparence that is magnetic. 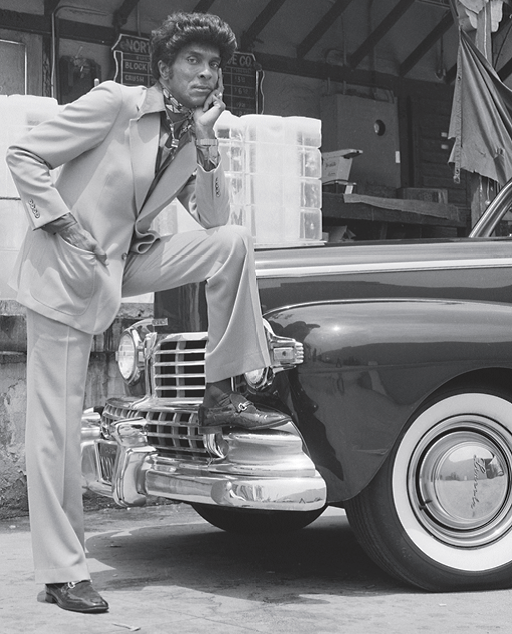 Those reasons and more are why his books are so gripping and addicting. He is a large figure because he was a pioneer and lived the life he wrote about – something that many authors cannot say. I don’t compare him to Baldwin and the like but to Mark Twain etc. Like Twain, he showed the reader a hidden culture that was peppered with a vernacular and social situations that were exclusive to that world.

M.O.I. JR: Will this film have a theatrical release in the U.S.? When?

M.O.I. JR: Do you think that the literature of Robert Beck contributed to the beginnings of gangsta reality rap? How?

Jorge Hinojosa: Absolutely, Ice-T is recognized as the father of gansta rap and has said he emulated what Iceberg did in his books. Ice-T’s music spawned many followers, so there is no doubt that Iceberg had a massive influence. Even still today, Jay-Z calls himself Iceberg Slim.

M.O.I. JR: How can people keep up with what is going on with this monumental documentary?