California Code of Regulations Title 15, as well as the Departmental Operations Manual, CDCR’s rules – or self-governing laws – states: “These regulations are made in recognition and consideration of the value of inmate visitation as a means of increasing safety in prisons, maintaining family and community connections, and preparing inmates for successful release and rehabilitation (Section 3170(a)).” 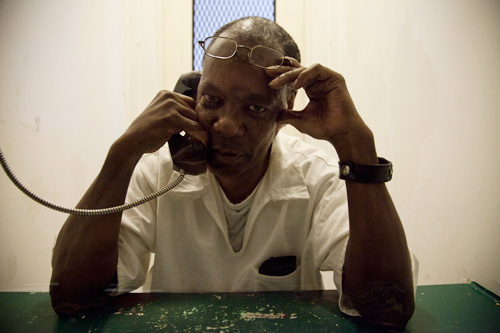 But yet CDCR’s reputed abuse of its own discretion is discouraging visits from family members, friends and, moreover, potential wives and girlfriends. This abuse is practiced throughout California’s Department of Corrections and Rehabilitation. They deliberately send you to a prison a great distance away from your home. My family lives in Oakland and the greater Bay Area. Yet I have been housed as far away as Centinela State Prison in Imperial, Calif. For those who don’t know, let’s just say it’s 30 minutes from both the Arizona border and the Mexican border.

Imagine having to travel 10 hours just to go see loved ones locked away. After your first 20 hour round trip, you can’t help but to be discouraged. Nevertheless, CDCR and its classification staff representative (CSR) continue to transfer inmates to these far away prisons.

I submit you have prisons located near every urban community, such as San Quentin for those living in the greater Bay Area, or Vacaville or Solano. These facilities are for lower level prisoners but housed high security prisoners at one time. Prisons in Central and Southern California would more than accommodate the, let’s say, 80-year-old grandparent or parent. Kids are forced to suffer harsh long journeys only for the prudent parent to acknowledge that is too far to travel with a child or an elderly visitor, and they never make the trek again.

Another practice of CDCR is what I call the “intermediation” process. You have a young lady coming to visit you and she meets the so-called “profile.” The prison’s visiting administration uses aggravating tactics to discourage her. For example, your visitor comes to the visitor processing department, and the guard says, “That’s the wrong color,” “That’s too revealing” or “That’s too tight.”

Your visitor is then asked to change, which is discouraging enough. But the more degrading part is that they have an assortment of used and worn clothing, and they give you an option of changing into these deplorable clothes or leaving. Nine times out of 10 she’ll change clothes. But now, dressed in less-appealing clothing, she’s humiliated and discouraged.

“These regulations are made in recognition and consideration of the value of inmate visitation as a means of increasing safety in prisons, maintaining family and community connections, and preparing inmates for successful release and rehabilitation (Section 3170(a)).”

Last, but definitely not least are the pressure tactics of the ISU (Investigations Services Unit). This is the most heinous of all tactics – tactics I’ve not only seen but experienced. These goons harass visitors by asking them to submit to unclothed body searches. Yes, a citizen guilty of no crime, not a ward of the state, and not under the jurisdiction thereof is asked to utterly strip down “buck-ass” naked and instructed to do things such as bend at the waist and spread their buttocks apart! If that isn’t an abuse of authority, what is?

My wife-to-be was not too long ago asked to do these things. She complied but not WILLfully. Who would want to be nude and asked to spread their cheeks in front of two strangers? Moreover, all of this when I am restricted to non-contact visits! Yes, that’s right. I am behind a glass – 6-inch-thick glass separates my fiancée from me, yet she was asked to “strip search.”

I can’t begin to explain how I felt when I saw the tears well up in my fiancée’s magnificent eyes as she quivered from what she just experienced – all just to see the man she loves, a man she can’t even touch. She traveled hundreds of miles just to see me from behind a glass and was still subjected to such a thing. I was devastated, but what could I say? All I could think of to say, as she cried uncontrollably, is sorry. I’m sorry not for what I did but for what she had to go through just to see me.

Throughout California’s prisons, it’s common for family members to encounter these egregious practices performed by CDCR pro-forma. If a survey were taken of inmates who’ve had the good fortune of being visited by their family members, nearly all, I believe, would report at least one of these egregious practices by CDCR’s administrators. These practices are inferred to be tactics of discouragement, with intimidation at the forefront!

Visitors should not be punished and/or humiliated just to come to see their loved one locked away. Many good men suffer depression and some even commit suicide from the unbearable reality that no one cares. We all are human and we all make mistakes. But who is more guilty, those who break the law or those who make the laws then break them? You be the judge.

Prisoners like me, who have life sentences, are deemed forbidden fruit. Who wants a man with life when he can’t even have the equal protection right to family visits? Hebrews 13:3 reads, “Remember them that are in prison, as being bound with them, and them which suffer adversity, as yourself being in prison with them.”

Prisoners and family should not be intimidated by Goliath. Who is the bound man’s David? Who will fight for those who choose not to fight for themselves? Through the United Kage Brothers’ peaceful movement, the Band of Brothers must compound! Black, Brown, Yellow, White must unite! One must stand for something to keep from falling for anything.

We all are human and we all make mistakes. But who is more guilty, those who break the law or those who make the laws then break them? You be the judge.

Locked up or free, we all are affected by injustice. An injustice here is an injustice everywhere. We are the people and the people must be heard. We’re tired of violence and its cesspool. It’s time for a united front for both free and incarcerated! Speak for those who can’t speak for themselves!

These practices are an atrocity to justice. All men and women have a right to the due process of law and to be free of threat to life and limb.

CDCR’s new framework is to encourage a prisoner to develop a social network to offer him familiarity with the outside social arena. Thus, although CDCR’s goal according to its regulations is to recognize the necessity for prisoners to have access to visits and other communications with family and to enhance “community connections,” these regulations are in vain.

Family and friends are being discouraged through great distances and intimidation tactics. These practices are designed to instill mental degradation causing prisoners’ spirits to be broken. Mental disorders are at an all-time high. More and more mental disorders are being diagnosed throughout California’s prison system. With no family, no hope, a broken man can’t stand.

Locked up or free, we all are affected by injustice.

To the conscious mind, these practices must be seen as atrocities to be abolished! Outside “watchdog” organizations need to be formed. Referees instead of correctional officers should be given the authority to hear rule violations as well as review Form 602 inmate and parolee appeals.

Legislators must take heed to the necessity of revising Penal Code Section 5058, which gives jurisdiction over all rulemaking to the CDCR. A fair hearing or trial must be insured through an outside impartial judicial system.

The family of one prisoner is family to all prisoners. You are enduring the same deliberate hardships we all are enduring. And just as the people pay taxes, they have a voice. Freedom is an ongoing fight.