“It wasn’t always like this. The wide-scale use of isolation is, almost exclusively, a phenomenon of the past 20 years. In 1890 the United States Supreme Court came close to declaring the punishment to be unconstitutional. Writing for the majority in the case of a Colorado murderer who had been held in isolation for a month, Justice Samuel Miller noted that experience had revealed ‘serious objections’ to solitary confinement:

“‘A considerable number of the prisoners fell, after even a short confinement, into a semi-fatuous condition, from which it was next to impossible to arouse them, and others became violently insane; others, still, committed suicide; while those who stood the ordeal better were not generally reformed, and in most cases did not recover sufficient mental activity to be of any subsequent service to the community.’” – Atul Gawande in “Hellhole: The United States holds tens of thousands of inmates in long-term solitary confinement. Is this torture?” The New Yorker, March 30, 2009 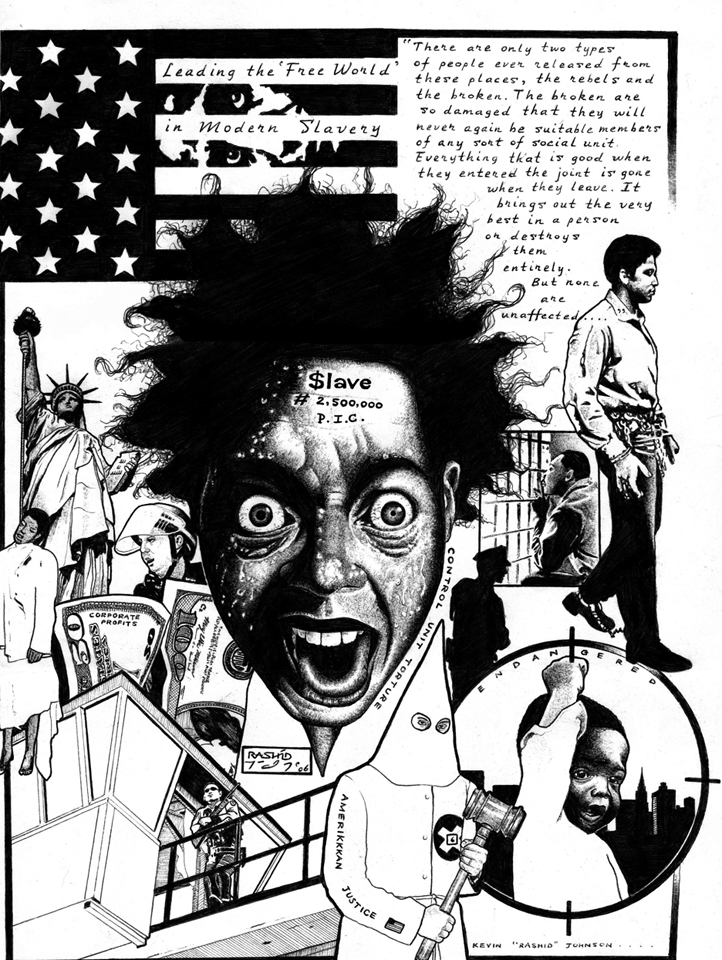 In December of 1999, the American Medical Association published their protocol as to how physicians are supposed to treat and deal with the issue of torture. It states: “Physicians must oppose and must not participate in torture for any reason. Participation in torture includes, but is not limited to, providing or withholding any services, substances, or knowledge to facilitate the practice of torture. Physicians must not be present when torture is used or threatened.

But in spite of the American Medical Association protocol on torture, published over 13 years ago, the California Department of Corrections and Rehabilitation’s medical and mental health physicians have yet to offer California prisoners any qualitative medical or mental health treatment, intervention or service. And they have been present and dead silent on the issue of how we prisoners have been tortured in CDCR’s Security Housing Unit and Communications Management Unit, where social deprivation – torture – has been the norm for the past 10 to 40-plus years.

For the past 20 consecutive years, we have been consigned to indefinite solitary confinement status in Pelican Bay’s SHU/CMU units for the sole reasons of our New Afrikan Revolutionary Nationalist (NARN) political beliefs and activities within these slave kamps – prisons – and our adamant refusal to become informants for the state! Over this period we have unfortunately been able to empirically observe the futility of CDCR’s medical and mental health staff interventions and evaluations of prisoners housed in the SHU/CMU units.

When we were first assigned to the SHU/CMU units, we were subjected to a rote and cursory screening process by CDCR’s medical and mental health staff at Pelican Bay State Prison (PBSP) to supposedly determine if we were psychologically competent to endure indefinite housing in the SHU/CMU torture unit. This screening process is required to be administered to every prisoner entering these torture chambers.

However, the screening that they put each prisoner through amounts to a surface level evaluation. The process literally takes about two to five minutes, with questions like: 1) What’s your name? 2) How old are you? 3) Have you been to prison before? 4) Are you feeling suicidal, or have you ever been treated for any mental health problems? 5) Do you have a history of drug or alcohol use?

This is all that is typically asked of us in determining if we’re suitable for enduring the prolonged psychological torture of solitary confinement. It is virtually impossible for any person to make a qualitative assessment of any individual’s character regarding his psychological makeup based upon the five basic questions that we’ve just identified.

For the past 20 consecutive years we have empirically observed the futility of CDCR’s medical and mental health staff interventions and evaluations of prisoners housed in the SHU/CMU units.

In the years that followed our initial medical and mental health care evaluations, it soon became quite clear that this rote and cursory process of so-called intervention was the norm. Such practices are systemically rooted in the historical materialism of CDCR’s prisons, as was revealed in a book called “The Melancholy History of Soledad Prison,” where Min. S. Yee was analyzing and recording the various human rights abuses that became manifest in the late 1960s and early 1970s at Soledad State Prison.

A bench trial was held in Jordan v. Fitzharris, 257 F.Supp. 674, 682 (N.D.Cal. 1966), the Federal District Court in San Francisco concluding that conditions in O-Wing at Soledad State Prison were cruel and unusual. As a result of these negative contradictions being exposed, three issues immediately became apparent: 1) mental health staff being poorly trained on how to intervene with and evaluate prisoners; 2) the lack of any qualitative oversight to ensure that mental health staff training is consistently updated with current standards of treatment; and 3) mental health staff’s disdainful attitude toward prisoners.

Min S. Yee stated in his book: “Dr. Edward Kunkel, the chief medical officer at Soledad, was a correspondent because Jordan had charged that he had been denied adequate medical care. Kunkel, a retired Navy captain, had been Soledad’s CMO for 11 years. He testified that his visits to inmates’ cells were a matter of routine. In fact, the doctor told the court, ‘When I’m not on vacation, I visit each and every cell every Monday morning.’ It wasn’t the length of Dr. Kunkel’s vacations that disturbed Jordan’s attorney. Cohler wanted to know how much time the doctor spent inspecting cells. The doctor said plenty of time, but Cohler produced O-Wing visiting logs which showed that the physician must have inspected 108 cells in a period of eight minutes.

“Judge Harris was more concerned about the doctor’s attitude about prisons in general. The judge was uneasy because Dr. Kunkel kept referring to ‘incorrigibles’ whenever he talked about inmates. Judge Harris took over the questioning himself, asking the doctor to define an ‘incorrigible.’ Kunkel answered, ‘An incorrigible is one that the psychiatrists have given up on, we have given up on and everybody else has, and there is not much more for him.’

“The judge continued: Dr. Kunkel said he read the books they gave him when he came in to work, about 11 years ago. Harris asked if he had ‘kept abreast of the current literature in penology.’ The doctor said ‘not completely.’ Harris asked Kunkel if he would state to the court what, if any, studies he had made recently in penology. Kunkel replied wanly that he hadn’t made any. And yet, snapped Harris, you assume to characterize an individual as an incorrigible. Isn’t that true? (Pages 19-20)”

The practice of medical and mental health staff doing routine visits at prisoner’s cells still continues to this day and in fact it is now worse than it was 40 years ago! For example, each SHU/CMU unit at Pelican Bay has a total of 48 cells and there is a total of 22 SHU/CMU units, meaning there are at least 1,056 prisoners who must be seen and evaluated when medical and mental health staff make their rounds once a month.

But it must be noted there is only one medical/mental health staff person who does these routine rounds, which are literally five-minute walk-throughs, as that is how long it takes for them to walk through from A-Pod to F-Pod. So in total, that is 1 hour and 10 minutes, give or take a few minutes, which is clearly not enough time to engage, analyze and/or inspect the living conditions of 1,056 prisoners!! My people, it is important to keep in mind that this is how CDCR-PBSP’s medical/mental health staff determine and then recommend to the Parole Board commissioners our lack of suitability for parole.

It is scientifically proven that prolonged solitary confinement – isolation – constitutes torture as it causes and creates the following symptoms: depression, despair, anxiety, rage, claustrophobia, hallucination, problems with impulse control and an impaired ability to think, concentrate or remember, according to “The Prison Inside the Prison: Control Units, Supermax Prisons, and Devices of Torture” by Rachael Kamel and Bonnie Kerness of the American Friends Service Committee.

Over the years our beloved brotha Kijana Tasiri Askari has developed a medical condition, an “anxiety disorder,” that causes him to hyperventilate and he also struggles to remember the simplest of things.

We’ve also noticed several prisoners struggle with impulse control. One prisoner in particular has been desperately pleading for help with the psychosis that he has been suffering from the afflictions of torture. Every day this prisoner gets on the tier yelling and screaming in an uncontrollable rage while custody and mental health staff sit idly by and offer no intervention. This makes a criminal conspiracy with CDCR’s state operatives by subjugating us to indefinite solitary confinement – torture.

It is scientifically proven that prolonged solitary confinement – isolation – constitutes torture as it causes and creates the following symptoms: depression, despair, anxiety, rage, claustrophobia, hallucination, problems with impulse control and an impaired ability to think, concentrate or remember.

Article 2 of the United Nations Geneva Convention on Genocide defines the crimes of genocide as meaning “any of the following acts when committed with intent to destroy, in whole or in part, a national, ethnical, racial or religious group as such: (a) Killing members of the group; (b) Causing serious bodily or mental harm to members of the group; (c) Deliberately inflicting on the group conditions of life calculated to bring about its physical destruction in whole or in part; (d) Imposing measures intended to prevent births within the group; and (e) Forcibly transferring children of the group to another group.”

The harsh reality of CDCR’s medical and mental health staff enabling prisoners to be tortured in solitary confinement via their collective silence on the issue was eloquently summed up when Janis Petzel of the Maine Association of Psychiatric Physicians stated, in “Are Doctors Complicit in Prison Torture”: “I do believe they should look at the big picture, talking specifically about doctors who do ‘peer reviews.’ Twenty years ahead, I don’t want to look back and say we were like the Nazi doctors. When physicians encounter solitary confinement, they have a duty to speak out.”

This negative contradiction of sham mental health interventions and evaluations must be met head-on with the power of the people! As it is, the health of our communities will ultimately suffer from this, when prisoners with release dates start re-entering our communities from these solitary confinement “torture chambers.”

Thus, it is in our community’s interest to begin petitioning and contacting California state legislators in Sacramento who are members of the Public Safety Committee – Chairman Tom Ammiano, Nancy Skinner, Holly J. Mitchell, Reginald Jones-Sawyer, Melissa Melendez, Marie Waldron and Bill Quirk – and demand that: 1) all solitary confinement units be immediately abolished and 2) the current pool of CDCR medical and mental health staff be immediately replaced with some professionally trained workers, psychologists etc. from the communities that we come from so that the health of our communities can be protected, along with putting an end to this criminal conspiracy of genocide and torture against us prisoners!

Note: To check out some of our work product, write to: So. Chicago ABC Zine Distro, c/o Anthony Rayson, P.O. Box 721, Homewood, IL 60430, and ask for a copy of Kijana Tashiri Askari’s pamphlets: The George Jackson Lives Series, Volumes 1-4, From Self-Destruction to the Reconstruction of Self. These pamphlets are free! For a copy of the Pelican Bay Human Rights Movement First Amendment Campaign mission statement, write to Attorney Carol Strickman, Legal Services for Prisoners With Children, 1540 Market St., Suite 490, San Francisco, CA 94102, or email azadeh@prisonerswithchildren.org.

We New Afrikans stand in solidarity with the end to hostilities agreement! Stop the torture. All power to the people.