WBAI AfrobeatRadio/Ann Garrison: On Wednesday, July 17, Nick Long reported for the Voice of America that the Congolese army’s recent successes at driving the M23 militia from their positions in eastern Congo have caused euphoria amongst Congolese, particularly in Goma, the capital city of North Kivu Province on Congo’s border with Rwanda. Here’s that Voice of America radio report:

“This was a government army position at mid-afternoon Wednesday, just after the M23 had started targeting some nearby tanks.

“’You men get forward,’ the sergeant is shouting. ‘Where are you retreating for? Get in front of the tanks.’

“For a moment, there was a brief panic as mortar bombs started falling, causing some casualties in this commando platoon.

“’Take that man and get him out of here,’ an officer shouts, pointing to a soldier who has just been hit.

“But the incoming fire seemed to be heavily outweighed by the army’s outgoing fire with tanks, artillery and helicopter gunships that pounded the rebel positions.

“After an hour or more of shelling on both sides, the commandos moved forward following the tanks.

“An intelligence officer said the unit had advanced 300 meters by mid-afternoon. That rate of progress may speed up if, as United Nations sources report, the rebels are running low on ammunition.

“The M23 is outmanned as well as outgunned, having only around 2,000 combatants against an army that on paper numbers 100,000. Although the army faces many other armed groups, few of them support M23.

“A civilian, Jules Akili, who traveled through the M23 zone on Wednesday before crossing over to the government side, told VOA he saw hardly any M23 soldiers.

“He says he traveled from Rutshuru Centre, a distance of about 40 kilometers, and saw only five M23 soldiers along the route, which was guarded by M23 police.

“Tens of thousands of people displaced by fighting who are living in camps around Goma are hoping the army can defeat all the rebels so they can return to their homes.

“These women at a displaced peoples camp say they would be very happy to see their villages liberated from the rebels and are hopeful the army can do it.

“A Congolese journalist told VOA five government soldiers were badly wounded on Wednesday, and a local journalist also was hurt.

“On Tuesday, the government said 120 rebels had been killed in the fighting since Sunday, a claim that could not be independently verified

“A United Nations source Wednesday evening said the army had pushed back an M23 counter attack and was still advancing.”

WBAI/AfrobeatRadio: And that was Nick Long, reporting from Goma for the Voice of America. Our only disagreement, here at AfrobeatRadio, is that we do not describe the M23 militia as rebels. The 2012 U.N. Group of Experts on the Democratic Republic of the Congo’s report documented that M23 is commanded by top officials of the Rwandan Army, who answer to Rwandan President Paul Kagame, and we consider a militia with the top of its command structure in a neighboring country to be invaders and occupiers, not rebels. 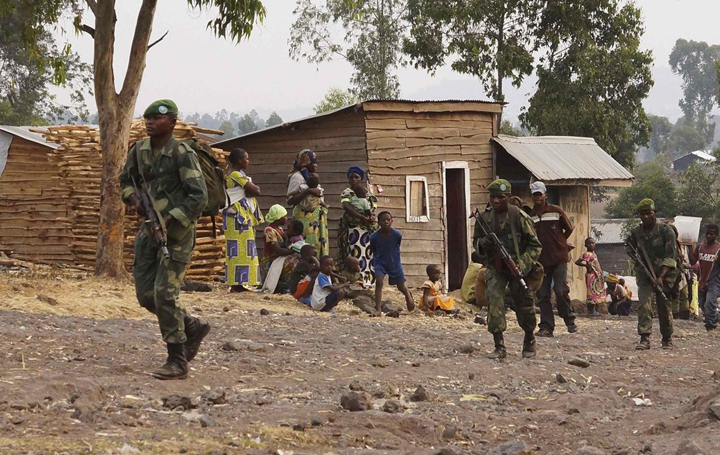 The past 13 years of U.N. investigations and other human rights reports have identified the M23 militia and its predecessor, the CNDP militia, as Rwandan and Ugandan allied forces with minerals smuggling networks that sustain the war in eastern Congo, which have operated with the blessing of the international community, including donor nations, the IMF and World Bank, and the U.N. Security Council.

Two days after his report that the Congolese army seemed so close to driving M23 from North Kivu, Nick Long reported, this time for the Associated Press, that 200 demonstrators had marched toward the United Nations base in Goma carrying placards that read, “The U.N. is mocking us” and “Let our armed forces do their job,” before being dispersed by police.

AfrobeatRadio spoke to Aimé Bomela, a native of eastern Congo now in Houston, who was born in Kisangani, speaks both Lingala and Swahili and remains in touch with extensive family and friends in Goma and elsewhere in eastern Congo. He said that Congolese people have every reason to believe that the U.N. has a history of preventing Congolese forces from repelling Rwandan and Ugandan invaders. He said the U.N. had intervened to prevent the M23’s previous incarnation, the CNDP militia, in 2007:

Aimé Bomela: So, here’s the thing: We do not have any evidence that we can prove that the United Nations is preventing Congolese army to attack the M23. But, in 2007, I went to Botembo – it’s between Beni and Lubero. I went to Botembo. I met with a soldier, a Congolese soldier. So he told me that when Laurent Nkunda’s CNDP attacked Rumangabo Camp, the United Nations was saying, “Congolese army, you have to stop. You have to stop, so that we can make a negotiation between you and the CNDP.”

WBAI AfrobeatRadio/Ann Garrison: AfrobeatRadio also spoke to Kambale Musavuli, Congolese native and mining researcher for Washington D.C.-based Friends of the Congo. Kambale was driving and on a cell phone, so we weren’t able to record his voice well enough for the radio, but he told us that Friends of the Congo’s on-the-ground sources in Goma, who did not want to risk being identified, confirmed that U.N. forces had actively blocked Congolese forces from advancing further on M23 positions.

Kambale also said to remind listeners that the U.N.’s history of stopping Congolese nationalist movements goes back as far as 1960 and ‘61, when they collaborated with Belgium and the U.S. in assassinating Patrice Lumumba, the hero of the country’s struggle for independence from Belgium and its first prime minister.

Title translation: The on the ground advance of our valiant FARDC [Congolese army] against the M23

Translation of the message at the end: “Our thoughts and prayers are with our valiant FARDC [Congolese army] and with our brothers and sisters in Kivu. May God protect them.”