Abolition Now! If no one else can persuade Jerry Brown to meet the hunger...
Facebook
Twitter
Email 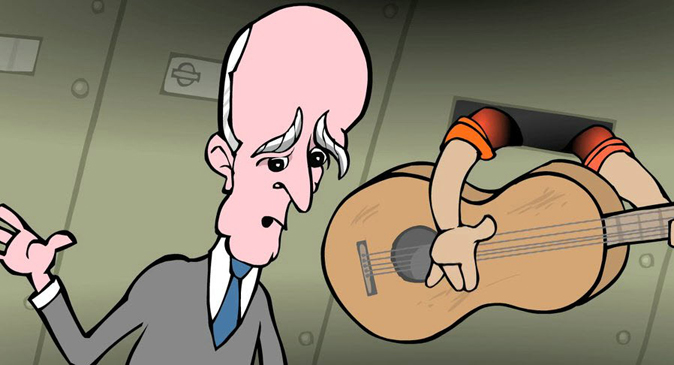 “Pulitzer Prize-winner Mark Fiore, who the Wall Street Journal has called ‘the undisputed guru of the form,’ creates animated political cartoons in San Francisco, where his work has been featured on the San Francisco Chronicle’s web site, SFGate.com, for over 10 years. His work also appears on Newsweek.com, Slate.com, CBSNews.com, MotherJones.com and NPR’s website. Fiore’s political animation has appeared on CNN, Frontline, Bill Moyers Journal, Salon.com and cable and broadcast outlets across the globe.”

That’s how world renowned political cartoonist Mark Fiore describes himself on his website. Now check out the cartoon he sent to the Chronicle today:

Cruel and Unusual Blues from MarkFiore on Vimeo.

Beneath the video, Mark Fiore wrote:

“I know it’s sacrilege to mess with this song, but the days of Johnny Cash playing concerts in California prisons are over, replaced by Gov. Jerry Brown whining about federal judges sticking their noses in our prisons. Never mind the deaths, sterilizations and lack of clean water, among other things.

“Prisoners are continuing the biggest inmate hunger strike in California history, sparked by the state’s excessive use of solitary confinement. Some pretty nasty things are being done in our name, so it’s time we paid more attention before the pressure cooker blows.

“For those of you who are just itching to say ‘lock ‘em up and throw away the key’ in the comments, just remember, we can’t give all prisoners life sentences in solitary confinement. The dysfunction and lack of rehabilitation in our prisons comes back to haunt us when inmates are released. So if the human compassion argument doesn’t win you over, think about how we’re all better off if prisoners return to the outside without being completely traumatized and dehumanized on the inside.”