“We present the video in which (Mexico City Mayor) Mancera sent over 1,000 cops to greet us with blows, trampling the displays where the picture of our brother Malcolm Latif appeared. It was terrible. Already Mancera has proven how fascist his type of government is, corrupt abuser.”

In the video, people are chanting: “Enough with the silence!” “End the corruption!” “We demand communication (with decision-makers)!”

Urgent alert! Police have attacked, beaten numerous protesters who are holding a peaceful vigil to call attention to the brutal death of Malcolm X’ grandson. Among those known to be physically and badly assaulted are Metelus Wilner and Jah Zakah from Haiti. We ask you to forward this and are looking for assistance in this matter urgently. 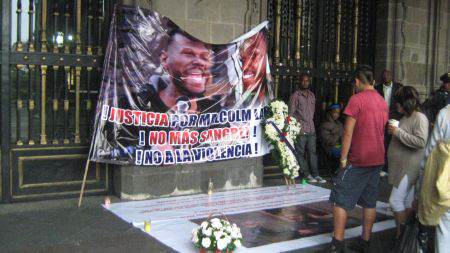 The vigil had been held for the past several days demanding answers as to why both the government of the United States and the government of Mexico are silent about 1) the death of a foreigner on their soil and a citizen in a foreign land, 2) the death of a grandson of a great leader in world history, 3) what motives caused a righteous man to meet such violent end and 4) whether we as persons of other origins are safe in Mexico?

To learn how this dire situation developed, read Mexico demands justice for Malcolm Latif Shabazz and the two more recent dispatches below.

After the ruthless murder of Malcolm Latif Shabazz in Mexico City on May 9, 2013, many people have expressed their rejection of this crime and their concerns regarding the official version. 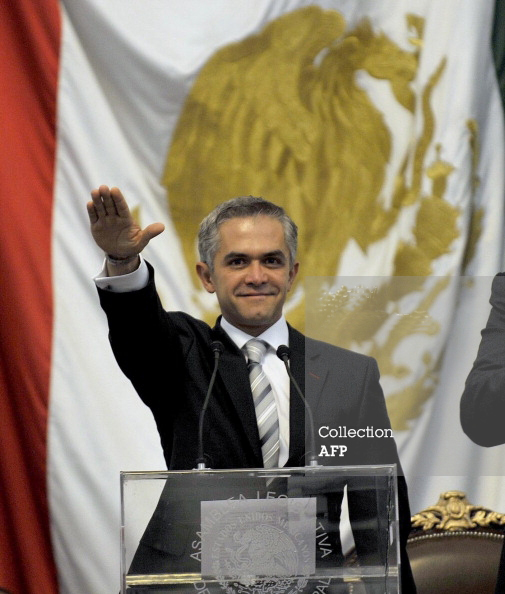 But across the country, only one organization has acted to demand justice. After demonstrating several times without any response from the head of Mexico City’s government, Mayor Miguel Mancera, the Committee for the Defense of Naturalized and Afro-Mexicans (CCDNAM) initiated a hunger strike yesterday, July 4, at the doors of the Federal District Government Building.

“Today we are beginning a hunger strike and we do so with conviction. We seek justice for the murder of Malcolm Latif Shabazz,” said Wilner Metelus, president of CCDNAM. “His grandfather, Malcolm X, did much for the benefit of humanity. He was one of the last century’s most important human rights defenders. We cannot accept that death of his grandson in silence. Although his blood family of is in the United States, we consider the young Malcolm as our brother.”

The strikers carried banners with images of the two Malcolms that invite us to reflect on their way of thinking and acting.

We recall a fragment of a speech that Malcolm X gave in Detroit on Feb. 14, 1965, the night his home was bombed in Harlem one week before his assassination. Speaking to the relatively newly formed Organization of Afro-American Unity, which was “designed to combat all the negative political, economic and social disparities in our neighborhoods,” he said: “One of our first programs is to bring our problem outside the context of civil rights at the international level and place it in the context of human rights so that the whole world can have a voice in our fight. If we keep to the level of civil rights, the only place we can seek allies is within the limits U.S. borders. But when we consider it a struggle for human rights, it is internationalized and we can open the door to all kinds of advice and support from our brothers in Africa, Latin America, Asia and other parts of the world.”

And to know a little more about who Malcolm Latif Shabazz was, listen to what his friend, the NBA basketball star Etan Thomas, said at a commemorative event held in Harlem: “Yes, he was my friend and I saw his passion and what he wanted do. The way he wanted to help our people was genuine. You could see it in his eyes when he spoke in forums in all parts of country.

“We did good work together, me and Malcolm – in Manhattan, in the Rikers Island prison and in Baltimore. In Rikers Island, we talked to around 500 young men, all under the age of 18 who are incarcerated in that infamous prison. (Many stars) participated, but one of the people who really connected with them the most was young Malcolm Shabazz. He was so honest with them. He talked about the mistakes he had made and how he used his time in prison to learn. He connected with them because they saw his sincerity. Youth can detect this immediately. Either they connect with you or they don’t. And he connected with them immediately. …

At the start of the hunger strike in Mexico City, Wilner Metelus answered some questions:

Q: Is this the first time that you have done a hunger strike?

A: No. We held a hunger strike two years ago for the Nigerian, Isaac Echinedu Nwachukwwu, who died when he was run over while trying to escape from two policemen who were beating him. We were here 12 days. And here we are again.

Q: What is your immediate demand?

A: That (Mayor) Miguel Mancera agree to dialogue with us. Nineteen days ago we gave him a letter, but he’s made no response. Today finally Government Secretary Héctor Serrano received us cordially and informed us that the case is in the hands of the attorney general for justice in the federal district.

We already knew this, but after they arrested two waiters a couple of days after the murder, there has been no breakthrough. The apparatus of justice in this country is not working well. So we will not move from here until we have a dialogue with the mayor. Malcolm Latif is giving us the strength to be able continue the strike.”

Q: Are there broader demands?

A: Let justice be done. And not only do we want justice for Malcolm Latif but for all Mexicans, and there are many who have suffered outrages. We also pledge our solidarity with them.

This story first appeared July 5 on amigosdemumiamx, a Mexican site dedicated to the liberation of Mumia Abu Jamal and the legacy of Malcolm X.

This video was posted July 10, on the sixth day of the hunger strike. 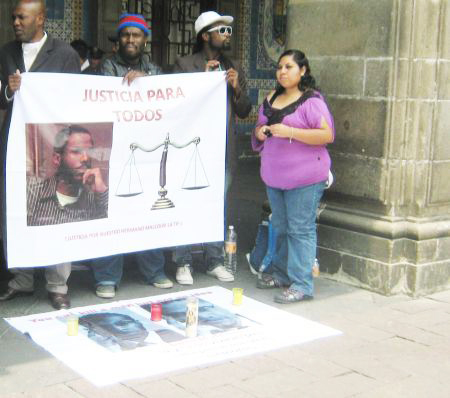 On Wednesday, July 10, two months after the murder of Malcolm Latif Shabazz in Mexico City and six days after the start of a hunger strike for justice in his case, the strikers laid a wreath outside the offices of the Federal District Government. That day, the grandson of Malcolm X would have turned 29.

On June 18, the Committee for the Defense of Naturalized and Afro-Mexicans (CCDNAM) delivered a letter requesting a meeting with the chief minister, Mayor Miguel Mancera, but so far he has not responded. When his secretary, Hector Serrano, received the strikers last week, we thought he might be a link, but now we think he’s just playing for time. He asks for more proposals, but we say our proposal is already clear. We want to meet with the mayor to explain that there are many flaws in the case. We also insist that he watch media videos showing how Malcolm Latif Shabazz died.

“The day I get out of here is the day that Mancera agrees to a meeting with us,” says Metelus. “He was elected by the citizens of the Federal District. He campaigned door to door. He has to respond to our letter to discuss this case with us. We are not criminals. We are Mexican citizens. 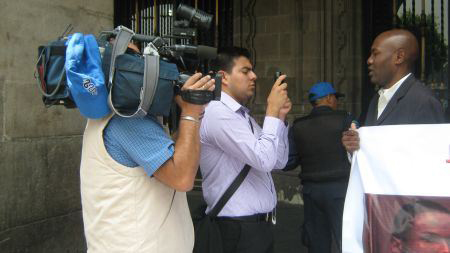 “We have the support of other brothers around the continent seeking justice for Malcolm Latif. We are now on a hunger strike for justice. We have gone six days without eating, without sleeping. But we still have strength. Yes, it is true: We might die, but this does not matter because we are doing something for a brother.”

“Mancera says his is a party of the left. He has received an international award. What a shame! He does not even have respect for human beings. I am returning my award. We have no relationship with the corrupt politicians of this country. They are supposed to be the people‘s representatives. Nor do we link to their parties.

“We asked everyone’s support but the media has responded with almost total silence of the media. Few journalists are coming to cover our events. Why? The same journalists are victims of abuse.

This story first appeared July 11 on amigosdemumiamx, a Mexican site dedicated to the liberation of Mumia Abu Jamal and the legacy of Malcolm X.