Oakland – With the historic California prisoner hunger strike in its 37th day, supporters are outraged that the California Department of Corrections and Rehabilitation (CDCR) continues to characterize the peaceful protest as a gang conspiracy, rather than negotiating with prisoners about their human rights demands. 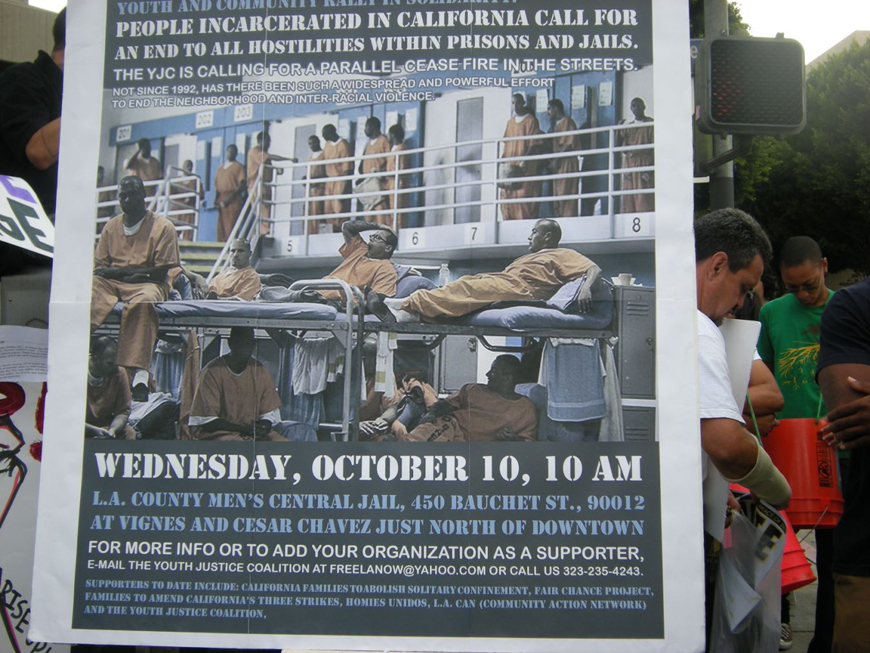 This week also marks the one-year anniversary of the writing of the “Agreement to End Hostilities” by Pelican Bay State Prison’s Security Housing Unit (SHU) prisoners, encouraging an end to violence among groups and individuals across California’s vast prison system. Not surprisingly, the CDCR refused to publicize or distribute the document.

“Rather than do the most humane and most simple thing—negotiate with hunger strikers – the CDCR is choosing to spend an incredible amount of time and taxpayer dollars continuing to dehumanize these prisoners,” said Azadeh Zohrabi, spokesperson for the Prisoner Hunger Strike Solidarity Coalition. “CDCR’s approach is hopeless and dangerous.

“It perpetuates a logic that says it is OK to torture someone based on their criminal convictions. It creates prison conditions that destroy people physically and mentally, and it arbitrarily metes out punishment that exceeds any sentences passed down by the courts. CDCR’s approach is out of sync with reality, human rights standards, and is causing harm to prisoners and their families.”

In a direct response to a salacious op-ed by CDCR boss Jeffrey Beard last week, Pelican Bay prisoner Alfred Sandoval questioned Beard’s historical memory and commitment to lessening violence in California’s prisons. “He [Beard] failed to mention the 39 inmates murdered between January 1987 and December 1995 in the guard-staged gladiator fights and the literally hundreds of seriously wounded and crippled survivors of those fights who were all shot by trigger happy correctional officers as entertainment,” wrote Sandoval.

“Even today here in the Administrative Segregation building or the SHU, an inmate can be beaten with impunity because there is a code of silence among the guards. This is part of the atmosphere in which we live out our lives. If Secretary Beard is concerned about violence in the prisons, he should look at the ‘Agreement to End Hostilities.’ We asked that this agreement be posted and circulated in the California prison system. With all his degrees in psychology, you would think he could figure out that would be a good idea.”

If Secretary Beard is concerned about violence in the prisons, he should look at the ‘Agreement to End Hostilities.’

The agreement calls for “an end to more than 20-30 years of hostilities between our racial groups” and encourages prisoners to deescalate potentially violent situations. “If personal issues arise between individuals, people need to do all they can to exhaust all diplomatic means to settle such disputes; do not allow personal, individual issues to escalate into racial group issues,” says the agreement, and it ends with a plea for a sustained peace effort among prisoners:

“We must all hold strong to our mutual agreement from this point on and focus our time, attention and energy on mutual causes beneficial to all of us and our best interests. We can no longer allow the CDCR to use us against each other for their benefit! Because the reality is that collectively, we are an empowered, mighty force that can positively change this entire corrupt system into a system that actually benefits prisoners and, thereby, the public as a whole.”