The Stop Mass Incarceration Network and Assemblymember Tom Ammiano, in support of the California prison hunger strikers and their five demands, invite the public to visit an installation of a life-sized mock Security Housing Unit (SHU) cell on the California State Capitol South Steps in Sacramento.

The cell will be on display – and you can walk right in to see how it feels – from 8 a.m. to 8 p.m. on Wednesday, Aug. 14. A press conference, featuring Assemblymember and Public Safety Committee Chair Tom Ammiano, the Stop Mass Incarceration Network, people formerly incarcerated in California Department of Corrections (CDCR) SHUs, SHU prisoners’ families, and other voices of support and conscience will be held at noon. 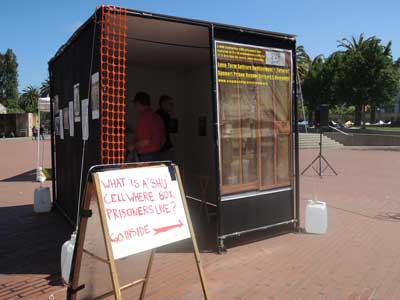 This stark multimedia installation will allow visitors to acquire a tactile and visceral understanding of the reality of solitary confinement that over 4,000 California prisoners have endured for years and decades, and why this is cruel and unusual punishment deemed torture by the U.N. and human rights groups. The installation includes images of SHU cells and prisoners and moving testimony from prisoners and others.

The families, Assemblyperson Ammiano, and SMIN invite Jerry Brown and Jeffrey Beard to visit the SHU and to state why this is not torture.

On July 8, 2013, 30,000 California prisoners began a hunger strike to end the torture of solitary confinement and for their basic rights and humanity. Their central demand is “comply with the recommendation of the U.S. Commission on Safety and Abuse in Prisons (2006) regarding an end to long-term solitary confinement.”

Now, hundreds of prisoners have gone over one month without food and many more in many prisons have supported the strike and gone on and off the hunger strike since its beginning. Millions throughout society support the prisoners, including prominent voices such as Jay Leno, Danny Glover, Cornel West, Noam Chomsky, Bonnie Raitt and Gloria Steinem.

Yet Gov. Jerry Brown and the California Department of Corrections refuse to meet their just demands, have retaliated against the hunger strikers, and have publicly vilified the prisoners and the hunger strike. In an Aug. 6 opinion piece in the Los Angeles Times, CDCR Secretary Jeffrey Beard claimed that the notorious SHU “is not ‘solitary confinement.’”

The Stop Mass Incarceration Network states: “This is an EMERGENCY! One hunger striker, Billy ‘Guero’ Sell, has already died. Many more people need to stand NOW with the prisoner hunger strikers!”

Gov. Jerry Brown and the California Department of Corrections refuse to meet their just demands, have retaliated against the hunger strikers, and have publicly vilified the prisoners and the hunger strike.

The families, Assemblyperson Ammiano, and SMIN invite Jerry Brown and Jeffrey Beard to visit the SHU and to state why this is not torture.

“A hunger strike is not taken lightly by us,” a prisoner wrote on the first day of the strike, July 8, to the Prisoner Hunger Strike Solidarity Coalition. “We are not suicidal; rather we hope to save lives.

“We may not be able to save our lives. But we have come to identify our existence in SHU as a conveyor belt leading into an oven of inferno. And we may indeed be strapped onto this conveyor belt with no way out, as we have continued for years to watch our comrades fall into the abyss of the oven in psychosis, suicide or other chronic illness.

“And we may not be able to stop our ride from dropping us into the abyss but we will stop this conveyor belt for future generations to come. Today this ride stops!”

Call D’Andre Teeter at (510) 926-5207 or email stopmassincarcerationbayarea@gmail.com to speak, get involved or support. To learn more, go to the even page at http://tmblr.co/ZFB3QrrnJWWg.