At the beginning of this video, you hear a prison guard shouting, “”Get down! Just get down! Get down! Get down!” presumably to the other prisoners. That exclamation is followed by, “Oh (inaudible) guy over there with his hands hitting him … and a damn hammer!”

The deplorable beatings you’re witnessing occurred on New Year’s Eve, just before midnight, on Dec. 31, 2010. It’s taken two years and nearly eight months for the Georgia Bureau of Investigation to release this video. A very persistent family member of one of the victims finally persuaded them to give it to her, and Rev. Kenneth Glasgow, a strong advocate for justice for prisoners, posted it to YouTube for the world to see.

The family member who retrieved the video describes it as “Georgia inmates being beaten with a hammer-like object while handcuffed,” and she adds: “The Georgia Department of Corrections denies this happened but were caught on tape. The officer responsible was never arrested or reprimanded. The district attorney had the video and never sought charges.

“The family is demanding justice for this barbaric, inhumane act. We ask everyone to help by contacting District Attorney Tom Durden at (912) 876-4151.” 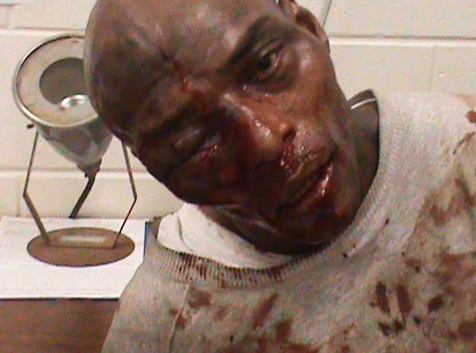 “Within the entire GBI (Georgia Bureau of Investigation) file,” says Rev. Glasgow, “no GBI investigative agent or prison official identifies the guard on the video who is clearly beating non-resisting Miguel Jackson and Kelvin Stevenson with the hammer-like object.

“If you look closely, you will see a very large man lying on top of Kelvin Stevenson as the other guard batters his head with the hammer. Eye witnesses state that Stevenson was also handcuffed at the time.

“For all those who watch this and ask what’s the whole story, first of all ask yourself why no GBI agent or prison official reported this – at least not in the ‘official report’ – when this is their video.

“The family and advocates want justice and humane treatment, the situation investigated, and the officer in that video arrested.

“The family is demanding justice for this barbaric, inhumane act. We ask everyone to help by contacting District Attorney Tom Durden at (912) 876-4151.”

“This is how your loved ones are being treated in Georgia state prisons,” Rev. Glasgow concludes.

Why was such fury unleashed on these prisoners?

The 13th Amendment prohibits slavery in the U.S. with one critical exception: “except as a punishment for crime.” And Georgia’s prison system takes that literally. Prisoners in Georgia must provide their labor for free; they work both inside the prison and are hired out to private employers.

On Dec. 9, 2010, in a move described as the “biggest prisoner strike in U.S. history,” thousands of Georgia prisoners across the state refused to leave their cells. “Chief among the prisoners’ demands,” the New York Times reported, “is that they be compensated for jailhouse labor.”

By locking themselves in their cells, Georgia prisoners refused for one day to be slaves. In response, Georgia authorities went to war defending slavery with the fury of the Confederacy.

“In an action which is unprecedented on several levels, Black, Brown and White inmates of Georgia’s notorious state prison system are standing together for a historic one day peaceful strike today, during which they are remaining in their cells, refusing work and other assignments and activities,” wrote Black Agenda Report managing editor Bruce A. Dixon, who lives in Georgia and helped form a committee of prisoner advocates.

“This is a groundbreaking event not only because inmates are standing up for themselves and their own human rights, but because prisoners are setting an example by reaching across racial boundaries which, in prisons, have historically been used to pit oppressed communities against each other,” he wrote on the day of the strike.

On Dec. 9, 2010, in a move described as the “biggest prisoner strike in U.S. history,” thousands of Georgia prisoners across the state refused to leave their cells. “Chief among the prisoners’ demands,” the New York Times reported, “is that they be compensated for jailhouse labor.”

Even then, retaliation had begun: “We have unconfirmed reports that authorities at Macon State Prison have aggressively responded to the strike by sending tactical squads in to rough up and menace inmates,” Dixon reported.

By locking themselves in their cells, Georgia prisoners refused for one day to be slaves. In response, Georgia authorities went to war defending slavery with the fury of the Confederacy.

Dixon has stayed on the story ever since, writing in “Starving for change: Hunger strike underway since June 10 in Georgia’s Jackson State Prison,” published July 2, 2012, in the Bay View, about the continuing retaliation that still has not let up:

“State corrections say they rounded up 37 whom they believed were the strike leaders and put them under close confinement at Jackson, the same prison where Troy Davis was executed last year. Most of these prisoners have remained there in close confinement, with severely restricted access to visits, communication and their attorneys, and without medical attention for the past 18 months.”

In his July 2012 article, Dixon was reporting on a hunger strike by some of those men: “Since June 10, according to accounts from prisoners and their families and Rev. Kenneth Glasgow of The Ordinary Peoples Society and the Prodigal Child Project, an undetermined number of prisoners at Georgia’s massive Diagnostic and Classification Prison near the city of Jackson have been on a hunger strike.”

“Some of these men are the Jackson State Prison hunger strikers. After two weeks, according to the families of Miguel Jackson and Preston Whiting, they are weak from hunger and subject to fainting spells. But they seem to believe they have little to lose. They are, a letter from one of them asserts, ‘starving for change.’”

By this time, the photo of Miguel Jackson’s swollen face after his literal hammering had become an icon of the Georgia prison strike. Dixon wrote: “One of the strikers is Miguel Jackson, who was taken in handcuffs from his cell at Smith State Prison 18 months ago, removed to a secluded area out of range of the video cameras that monitor almost every inch of most Georgia prisons, and beaten with a hammer-like object. Jackson is one of several brutalized prisoners whose injuries have been untreated since.

“Despite a blizzard of demands by his attorney, prison officials have refused Jackson and other prisoners medical attention for months. And although they have not eaten in two weeks, Jackson’s wife said, at the nine-day mark when medical necessity usually demands prisoners be removed to the infirmary, prison officials simply told Jackson, ‘You’re going to die,’ and left it at that.”

The photo of Miguel Jackson’s swollen face after his literal hammering had become an icon of the Georgia prison strike.

Now we know that Miguel Jackson’s beating was not out of range of the video cameras. The video shows both Jackson and Kelvin Stevenson being beaten and later sitting in wheelchairs, bloody and bandaged.

Now the California prisoner hunger strike is being billed as the largest and longest in history. Originally involving 30,000 prisoners across the state, dozens still surviving on water only since July 8, 2013, are approaching two months of starvation. For their families and advocates, this video showing the fury of prison guards against prisoners who refuse to be their slaves is particularly chilling.

As we fight for the human rights of our brothers and sisters behind enemy lines in California, let us also remember the prisoners in Georgia who are still being brutally punished for their brave one-day work strike – clearly a precedent for all the prison strikes that have followed, including the current California strike. We who know that prisoners are human and deserving of human rights must unite with families and advocates in Georgia in their demand for an end to the retaliation and with all people of good will to end prison torture everywhere.

Watch Rev. Kenneth Glasgow and Michelle Alexander, author of “The New Jim Crow: Mass Incarceration in the Age of Colorblindness,” in this new video, “Our Turn to Dream,” created to spawn a mass movement against mass incarceration. Share it widely.