Note from Leroy Moore: Through Krip-Hop Nation’s Facebook page, I met Ronald Galiwango, who lives and reports from Kalerwe, a surbub of Kampala, the capital of Uganda. Ronald Galiwango is a journalist in Kampala , and I asked him to write a story about people with disabilities in his country. Here it is.

Eunice Atim and Sarah Ationo live with their father, Alex Ekolu, in Amolatar town in Uganda, East Africa. Ekolu’s wife gave birth to a girl, Atim, but she suffered a dislocation, one year after her birth.

“It started like a joke and by the time I realized just how serious it had become, it was too late,” Ekolu says.

“I took her to Lira Hospital, where I was told the baby had weak bones. They put her limbs in a cast, which instead caused permanent problems,” he laments. 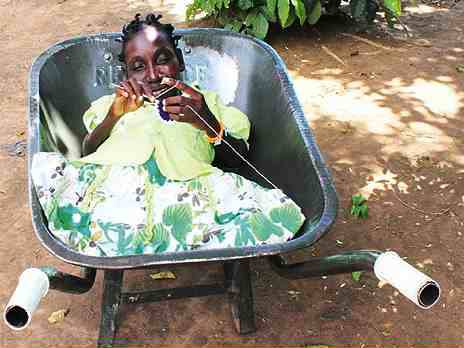 He went from hospital to hospital, but the money was never enough, so he opted to look after the girl at home.

Ekolu adds that initially, he thought it was witchcraft until he saw another child with the same condition.

Like Atim, his second daughter, Ationo, was also born with weak bones. He again went to hospitals and traditional healers, but none could do much to help the condition.

“I learned to live with them the way they are, because it is God who gave me these children and he had a reason,” he says.

However, despite his commitment to raise his daughters, he could not afford wheelchairs for both of them.

Wheelbarrow to the rescue!

Ekolu thought he could get help from the office for the disabled in Amolatar district, but nothing was done. “They sent people who took my daughters’ details and promised to bring for them wheelchairs, but they never returned.”

In Uganda, children begin studying in nursery (kindergarten), and this takes about two or three years. Nursery is followed by primary (P) level and takes seven years (P1-P7). Atim stopped in P6. After primary, one goes to senior (S) level and this takes six years (S1-S6). When senior level is done, one joins university.

Despite his commitment to raise his daughters, he could not afford wheelchairs for both of them.

“For the love of seeing my daughters go to school, I decided to buy wheelbarrows to transport them. I hired people to push them, but when they stopped I decided to do it myself,” Ekolu says.

Just when he was about to give up with the girls’ education, a Good Samaritan donated a wheelchair for Ationo and she was able to proceed with her education. She is now in S3.

Unfortunately, Atim has not had the same luck. At least not yet. She does not have a wheelchair and at some point, her father stopped pushing her to school in the wheelbarrow. This meant that her education also came to a stop. She dropped out of school in P6.

Ekolu thought he could get help from the office for the disabled in Amolatar district, but nothing was done.

Today, Atim stays at home. She spends most of her time crocheting tablecloths, a skill she learned from her late mother. When she needs to move, there is always the wheelbarrow and someone must be there to push her to her destination.

Atim seems to have got tired of visitors, especially those who she believes use her condition for their own benefit. It took hours to convince her that the interview I was requesting was with a newspaper journalist, not an NGO.

“Let me hope that what you are going to write will help me get a wheelchair, because I am tired of lying in this wheelbarrow like luggage,” she said, making her point clear.

“When I get a wheelchair, I want to go back to school and maybe, one day, become a leader for the disabled people in Amolatar, because the ones in place do not serve the purpose,” she added.

Ekolu would like those who are benefiting on behalf of those suffering, people and youth with disabilities, especially people who claim to be running NGOs, to be punished. He says NGO representatives have come to him, but none has ever helped.

Though Ekolu has another wife in his life now, he still avails himself to push his daughter wherever she wants to go. He says he can never let anything bad happen to them.

He also calls on the government to strengthen the office of the disabled because Amolatar has a big number of children and people who are disabled but do not receive any support.

He would like those who are benefiting on behalf of those suffering, people and youth with disabilities, especially people who claim to be running NGOs, to be punished. He says NGO representatives have come to him, but none has ever helped.

Ronald Galiwango is a journalist in Kampala, Uganda. He can be reached through Leroy Moore, founder of Krip-Hop Nation, at Kriphopnation@gmail.com. 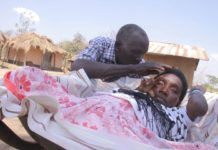 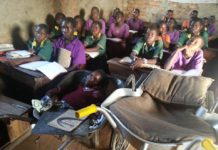